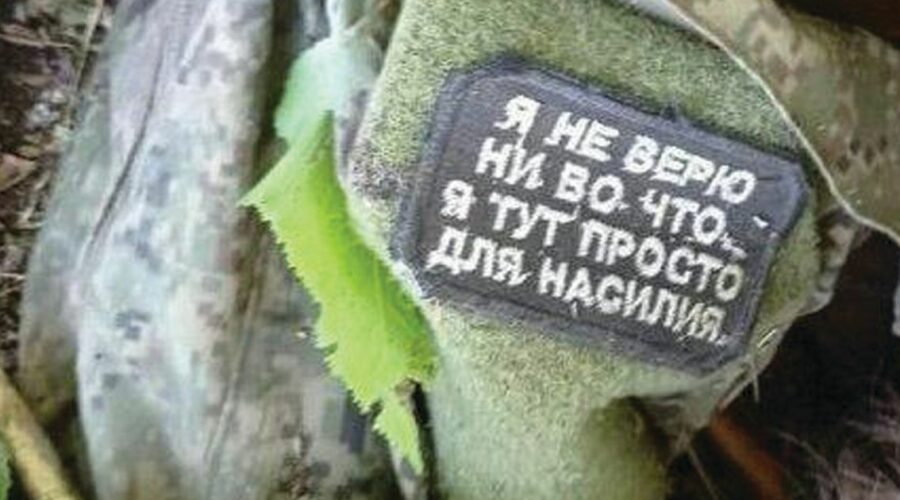 An arm patch on a dead Russian soldier in Ukraine stated that he was in the country during the conflict purely "for the sake of violence."

A series of pictures are circulating online showing the uniform of the slain invader with the sewn on patch bearing the message: "I don't believe in anything. I am here just for the sake of violence".

The soldier lays alongside another dead Russian, reportedly found by Ivan Vyhovsky's 58th Motorized Infantry Brigade near Bakhmut, in the Donetsk Oblast of Ukraine.

The two soldiers are from The Wagner Group, a Russian paramilitary organisation, reports stated.

In late May, two alleged Wagner Group fighters from Belarus were accused of murdering civilians near Kyiv, making them the first international mercenaries to face war crimes charges in Ukraine.

Leader of a volunteer group Donik Roman tweeted four grisly images of the dead bodies, pointing out that the troop with the patch "ordered" violence.

"The 'porter' was especially pleased. It says here 'for violence'. Violence ordered? Get it," Roman said.

Wagner is allegedly funded by Yevgeny Prigozhin, a powerful businessman who is closely linked to Vladimir Putin.

The group was established in 2014 to support pro-Russian separatists in eastern Ukraine.

Wagner is reported to have moved most of its soldiers who had been fighting in Libya to Ukraine to bolster Putin's army in an attempt to capture as much as possible of eastern Ukraine as possible.

It is alleged that soldiers from the brutal group raped new mums on a maternity ward in the Central African Republic (CAR) on on April 10.

The group has been used in conflicts around the world, as a resource of Russian military and is associated with atrocities and alleged war crimes over their countless violent attacks.