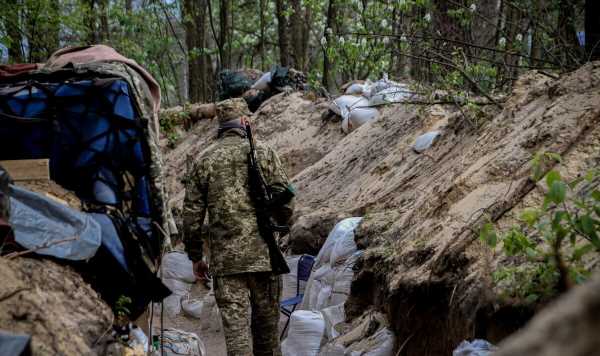 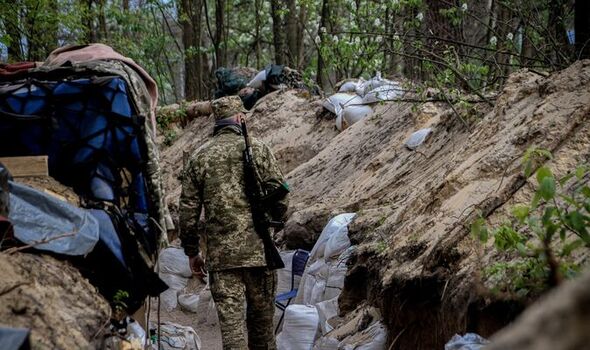 The capital remains on high alert to any future moves made by Russian forces. Increasing air raid sirens were heard across Kyiv over the weekend as a warning of more potential air attacks.

Monday’s event in Moscow has caused some panicked residents to leave Kyiv amid concerns the Kremlin could target the capital once again.

At the beginning of the war, Kyiv was Russia’s prime target. After Russia launched an assault on Hostomel – only 16 miles from the capital – Russian troops had planned on a quick capture of the Hostomel Airport to use as a military base. But Moscow failed to capture the airport and Kyiv, as defiant Ukrainian resistance fought back.

Troops in Kyiv still believe the capital is in Putin’s plans.

Andriy is the commander of Ukrainian Military’s 112th Brigade. Positioned in the Kyiv region, his unit is increasing its preparation for future assaults.

“We have to have regular works to strengthen our constructions and our territory, have watchmen all around, we have training on a daily basis right now, tactics, and shootings. In fact, we do not have such a thing as a holiday, it will be an even more alert day,” he told the Daily Express.

The commander admitted that potential attacks in Kyiv are a “big threat” because more residents have returned to their homes in recent weeks.

“We trust in our military government and we understand the dangerous ways Russians can approach our region and that’s why we have spread all of those anti-air defences, artillery and our army across all those possible points,” he said.

The commander couldn’t rule out that Kyiv would be attacked once again.

“Should Russia have the possibility to attack Kyiv more, it is still the aim to take over Kyiv and take over our governance. But we have certain advantages from preventing them from attacking Kyiv actively, we would like the rocket on 28th April to be the last one, but we cannot preclude the possibility for a further one, ” he added.

Ivan Verstyuk, a Ukrainian analyst said Putin’s speech was not as expected.

“Vladimir Putin’s speech was much weaker than expected. His purpose this time was to raise the morale of the Russian troops.

Moreover, Putin in his speech tried to persuade the Russian society that the ongoing war is a matter of national priority and of strategic importance,” he said.

But Verstyuk warned that despite Putin resisting to declare an open war, the Ukrainian cities Kyiv and Lviv in the west could still possibly face attacks.

“Possibly, aircraft attacks in Kyiv and Lviv – to remind us that nobody safe is in Ukraine,” he added.

At the time of writing, Russia last fired two missiles upon Kyiv on April 28th, hitting a block of apartments, killing one journalist and injuring several others.

But on Monday morning Ukrainian officials confirmed that four missiles that came from Russian forces in Crimea had hit the southern city of Odesa earlier that day.

09/05/2022 World News Comments Off on Ukraine: Troops in Kyiv determined to defend Ukrainian capital but brace for attacks
Markets