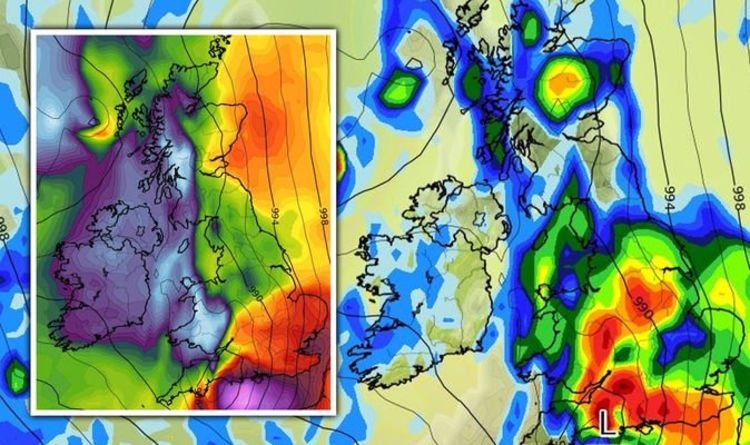 The Met Office has issued yellow weather warnings in two parts of the UK: The southeast and south coast of England have been issued rain and wind warnings from 1pm to 10pm, while the northeast of Scotland has been issued a rain warning from 4pm to 6am on Sunday. More experts have said the weekend’s sport fixtures will be “particularly impacted” by the wet weather.

“We do expect to see some localised flooding and the odd tree down (they are in leaf) but nothing OTT.

“Sporting fixtures will be particularly impacted.”

According to WXCharts maps, Saturday October 2 brings a huge downpour over much of the south of England and Wales.

Rainfall up to 10mm an hour is set to be seen in Cardiff, Southampton and London by 3pm on Saturday.

While the worst of the rain will clear for the south by 6pm, Scotland’s deluge is set to see 3mm an hour rainfall continue throughout Saturday and into Sunday.

The wet weather should clear for much of the UK by Monday, but Hurricane Sam has caused uncertainty in weather patterns for the UK.

He added: “Meanwhile, Cat 5. Sam is in mid-ocean and is set to move well to the NW of the UK as a deep low pressure area later this coming week, allowing high pressure and warm conditions to edge into most parts, more so for southern England and south Wales.”

“Saturday night into Sunday show greatest potential for damaging and disrupting winds at the moment.”

Aidan Givern, Met Office forecaster, also said the meteorologists were keeping an eye on Sam’s interactions with the UK’s jet stream, saying it is “particularly uncertain” how the hurricane will effect the weather.

He said: “It is currently safely away from the UK, on the other side of the Atlantic.

“It has not directly impacted any land areas, but by Monday (October 4) it will be approaching the jet stream, and it could play havoc with the jet stream.

“It is such a small bundle of energy that it will have a huge impact on the jet stream, if it joins in with it.

“It could push it to the north of the UK, and what the would mean is that by Thursday, or Friday, high pressure could build over the UK making it drier.

“Another scenario is that it won’t touch the jet stream, meaning it will continue to be wet and windy.”