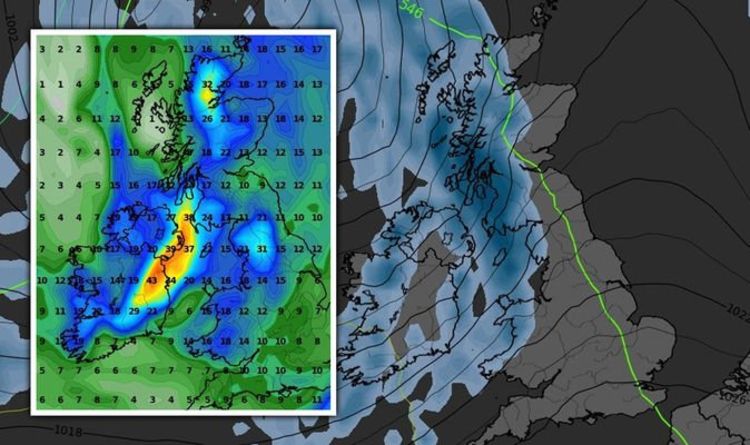 European weather: South to stay warm while North will be wetter

After an unseasonably warm September, meteorologists say the weekend will bring back a “cold front” with high wind speeds picking up throughout the week. Maps show an Western front of wet weather pushing eastwards across the UK, with rains of up to 5mm an hour spotted across much of the country.

Mary Gilbert, AccuWeather meteorologist, told Express.co.uk the rest of week will become “very active” ahead of the weekend’s “cold front”.

She said: “A potent storm is forecast to push Ireland and the UK late this week and usher in periods of strong to near-gale-force winds.

“Winds of this level can be locally damaging in nature and there is the potential for tree damage and power outages.

“Periods of heavy rain can also accompany these gusty winds.

“Any areas caught under a deluge may encounter localized flooding issues, especially in low-lying or poor drainage areas.”

Dan Stroud, Operational Meteorologist from the Met Office, also told Express.co.uk the weekend will bring “persistent and at times heavy rain likely to move northeast across the UK”.

He added: “Winds strengthening in the south and east late Saturday afternoon and evening with coastal gales, gusting to 60-70mph along the south coast in places.

“The area of organised cloud and rain, locally heavy is expected to clear north and east on Sunday but may persists across the far northeast of Scotland for much of the day were it will remain windy for much of the day, again with coastal gales.”

Maps from WXCharts suggest a wet front will strike the UK from midnight on Thursday.

Throughout the night, the worst of the weather will be felt in the northeast of England and Scotland, with rainfall of up to 5mm an hour and windspeed up to 62mph.

By midday, the worst of the wet spell for the north should subside, while patches of heavy rain will be seen in Liverpool as well as Wales, the southwest and east of England.

Another heavy spell of rain will strike Scotland and northern England at midnight on Friday, with highs of 5mm an hour recorded for the second night in a row.

No warnings are in effect from the Met Office for these days.

However, Mr Stroud added “confidence in the detail is not high at the moment”, due to the active weather front.

The Met Office’s forecast for Thursday held a “band of rain moving southeast across the UK, though far southeast may stay dry”, with “sunny spells” across the Northwest.

Their Friday to Sunday outlook added: “Remaining unsettled with showers or longer spells of rain affecting all areas although some drier, brighter interludes are expected.

In the Met Office’s long range forecasts for October, with the experts predicting a lot of rain, wind and cold temperatures for the start of the month.

They forecast the first half of October will experience low pressure which will result in showers or longer spells of rain.

BBC Weather forecaster Stav Danaos also warned on Wednesday: “An active jet is piled up some deep areas of low pressure which will continue to work its way from west to east.

“It will move from Ireland to the UK, northern France, northern Germany, Denmark and Scandinavia and then pushing on into eastern Europe.”