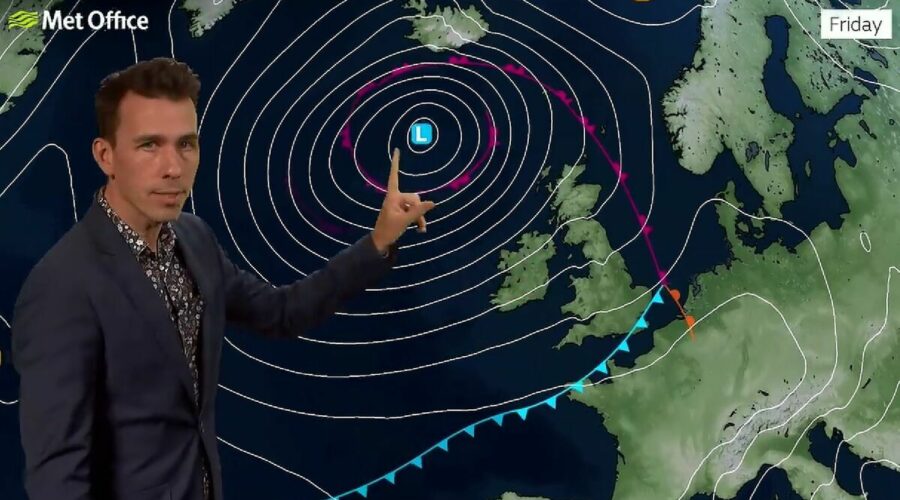 Met Office forecasts rain and sun before gales move in

Meteorologist Aidan McGivern said it would be a “blustery” start to Friday as areas of low pressure emerge. Despite the bright and warmer weather, there is also the potential for stronger winds and showers, particularly in Scotland and Northern Ireland.

The meteorologist said: “A bright start as this weather front clears away to the east.

“But an area of low pressure is edging closer.

“And this is a relatively deep area of low pressure for the time of the year.

“So some unreasonably strong winds developing during Friday.

“And that means that it’s a blustery start to the day, even if there is plenty of sunshine around first thing.

“The clouds will build by the late morning and some showers will start to develop, one or two for parts of Wales into western and northern England.

“But the most frequent and heaviest downpours will be across Scotland and Northern Ireland and that’s where the strongest winds will be as well, peaking around gale force for exposed coasts of the western isles.

“That’ll make it cool but still the potential for high teens, low twenties ,elsewhere especially given a bit of shelter from the wind and given a few bright spells 24C possible for London.

“And in the south and southeast it is mostly dry and bright during Friday, although it will be blustery.

“And then heading into the evening. Well for many clear spells develop, particularly towards the south and the east.

“But for western Scotland, the area of more persistent rain moves in from the west, heavy at times.

“And again we’ve got that strong wind. So a breezy night for many.”

Mr McGivern explained that it would be a “bright start” for many on Saturday but showers would develop later.

He said: “And again, that means it’s a relatively mild start to the weekend, a bright start for much of England, Wales, perhaps eastern Scotland as well. Showers will develop fairly widely.

“I think you can see them across Wales, the Midlands,into northern England, the odd one further south as well.

“It’ll also be blustery, that wind bouncing off the hills of north Wales and northern England.

“But the strongest winds once again reserved for Scotland and Northern Ireland.

“Heading into Saturday night then and further showers will develop ,but mostly towards the northwest.”