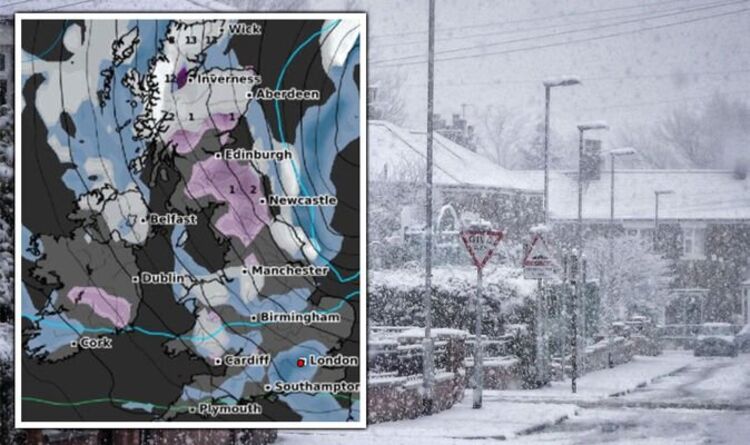 Tyler Roys, Senior Meteorologist at Accuweather, told Express.co.uk that a storm will move across Scotland on Tuesday night, bringing “rain and snow to Scotland”, and possibly Wales and the Midlands. Jo Farrow, a forecaster for NetWeather, said that snow will also be seen in northern England on Thursday, causing travel “disruption”. Winds of up to 50 to 60mph can be expected in northeast England and southeast Scotland.

It has forecast winds of up to 75mph across the UK, with the strongest winds between Manchester and Newcastle on Thursday.

On Thursday, WXCharts has predicted up to 4.7inches (12cm) of snow per hour in Scotland, with flakes also falling in Wales, Manchester and Newcastle.

Up to 0.7inches (2cm) is expected to have fallen in Newcastle by Thursday, with a similar amount falling in Bradford and Middlesboorough.

And by Friday, up to 6 inches (15cm) of snow is predicted to have accumulated in Scotland.

Speaking to Express.co.uk, Mr Roys said: “A warm front will be across Scotland with rain [on Tuesday], snow in the highest elevations of the Scottish Highlands.

“Rain will extend down into northwestern England.

“The storm that the warm front is associated with will move across Scotland Tuesday night and Wednesday and is expected to intensify.

“This will bring rain and snow to Scotland and showers across the rest of the United Kingdom.

“Showers are likely to be widespread Wednesday afternoon across Wales, Midlands and southern England.

“As the storm departs there are likely to be wind gusts between 50-60 mph across southeast Scotland and northeast England.

“Showers (snow in highest elevations) are likely to linger across N. Ireland, Scotland, northern England, Midlands and Wales on Thursday.

“If a storm moving across France is closer to the northern coast of France, then rain is likely across southern England with rain and high elevation snow in Wales and the Midlands. Confidence on this solution is low.”

Ms Farrow added: “Gradually through Wednesday another frontal divide pushes down from the northwest, and it is behind this that the cold Arctic air begins to spread in.

“The original front still bringing rain, sleet and wet snow to the Northern Isles, showery rain in clusters moving across Britain from the west.

“There could be wet snow over the highest hills on Wednesday too, all on a brisk wind.

“Then through Wednesday night, the front in the far north looks to move over northern mainland Scotland with more snow and showery outbreaks of rain, sleet and snow wrap around into Northern Ireland and more of Scotland.

“There could be snow over northern England by Thursday morning as well as eastern Scotland and disruption possible for the morning commute.”

Mr Roys said the cold temperatures will linger until the end of the week and into the weekend, getting warmer by Sunday.

He said: “It will remain chilly across the UK on Thursday.

“Friday will remain unsettled and chilly with showers across Scotland, N. Ireland and northern England (snow again in the Scottish Highlands) while there is likely to be a period of rain for Wales, Midlands and southern England.

“Showers will linger across the United Kingdom on Saturday. It will continue to remain chilly.

“For Palm Sunday, high pressure moves in and temperatures will be around normal with sunny periods.”