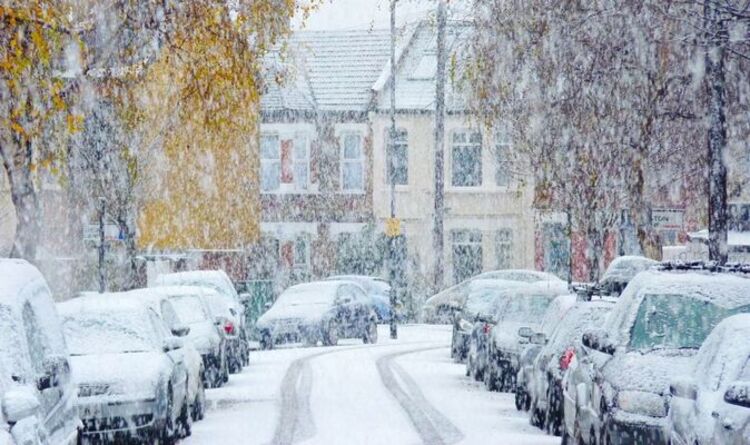 Meteorologists have warned that the cold weather is set to “dig in” and will last until the weekend where areas of northern Wales are set to see up to 15cm of snow. The biting weather front has been branded a “troublemaker” by meteorologists as Brits will be forced to dig out their jumpers once again.

The truly cold temperatures will set in from Wednesday evening after a steady decline throughout the day on Tuesday.

Mist and fog will greet the majority of commuters at the beginning of the day before it burns off in some winter sun that will bring highs of 10C to 11C in the south of England.

Meanwhile, temperatures in areas of Scotland will struggle to get above 2C with snow starting to fall in the early hours of Wednesday morning with one to four centimetres expected in areas such as Inverness and Aberdeen.

During these hours, the rest of the UK will receive increased cloud cover and showers but with temperatures dropping from double digits into single digits for most.

BBC weather presenter Ben Rich explained that the freezing level is the level where temperatures change and cause snow to melt into rain and noted how this will impact the weather this week.

The meteorologist said: “When the freezing level is just above the ground…it only takes a small shift to make the difference between whether you see rain, sleet or snow.”

With the incoming wintry conditions over the next few days, the freezing level is close to the ground and therefore the sleet and snow may come as a slight surprise.

BBC weather presenter Darren Bett added: “We could find sleet and snow falling almost anywhere in the middle part of the week.”

He added that temperatures will “take a significant tumble” with widespread frost and significant snowfall.

According to weather charts, temperatures on Thursday morning will be as low as -5C in Scotland and -4C in areas of north Yorkshire, with low single digit temperatures all across the UK.

However, by Thursday evening these levels decrease to -6C in Scotland bringing with it up to 11 centimetres of snowfall.

Meanwhile, temperatures will sink to -3C in the southern parts of England with up to 6 centimetres of snow expected in the southeast region.

Mr Bett declared that by midday on Thursday “we’re all in the same boat, sunshine and wintry shows, hale, sleet and snow and quite a lot of those as well, especially for the Eastern side of the UK”.

He added: “We are still in cold air as we head into next week as well!”

Weather charts show that areas of north Wales can expect a truly wintry weekend with areas seeing up to 15 centimetres of snowfall on Saturday morning.

After these early hours, temperatures will begin to stabilise across the UK with most seeing temperatures between 4C and 7C.