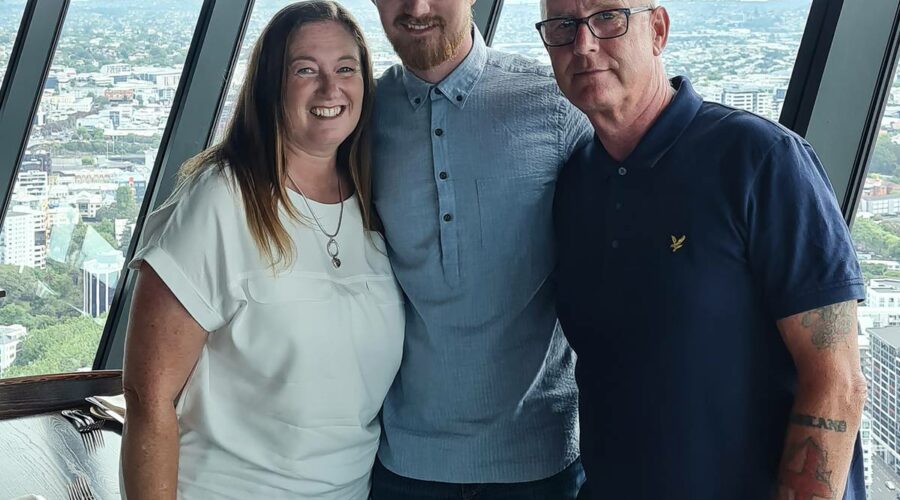 Josh Storer, who has spent months recovering from brain injuries in Auckland and recently received a new artifical skull, has been given approval from his doctors to fly home to the United Kingdom in time for Christmas.

Storer, 26, was left in a coma after an alleged assault at a North Shore bar on July 9. The right half of his skull was removed during surgery and on November 17, a new artificial skull was inserted, reconstructing the shape of his head.

After months of recovery, Storer said he’s glad to be alive and excited to be returning home to see friends and family.

“I’m very excited to go home and grab mum’s mum, my grandma, and give her the biggest hug,” Storer said.

“I’ve not seen her for three and a half years. I’m very excited to get back to the UK and see my friends and family.”

Storer is booked to fly home with his parents on December 21 and the Storer family hope to be reunited with loved ones for Christmas, providing they return a negative Covid-19 test on arrival in time.

“I didn’t know I was going to make it through alive but I’m so glad I did and I just want to thank you all, and thank my family, it’s unbelievable who I want to thank for this,” Storer said.

“Even the owner of the pub, I want to say a massive thank you to him for what he’s done for me.”

Storer still has a long road of recovery ahead of him in the UK, including issues using his left arm and some cognitive functions, but says recently, he’s started to feel like himself again.

“I feel normal again. My left arm is going strong, which is improved my confidence. Having my skull back and waking up in the morning, when I’m getting ready or whatever, and I look in the mirror and I’ve actually got a full head again,” he said.

“It just brought me down obviously when I didn’t have the right side of my head but due to the operation and the surgeon that did it, I just want to thank him massively for the effort that he put in.”

Storer moved to New Zealand in April 2018 on a working visa. He loved fishing in New Zealand, especially the Bay of Islands, and was passionate about his work at a drainage company. He says returning to New Zealand is still “on the cards” after he has recovered.

“Unfortunately, the situation happened and it’s put me in a position where I’ve got to go back to the UK now, get my recovery out the way, get my fitness back on track, get back into work and potentially [in] two and half years, [I] could come back to New Zealand…I’ll just see what happens.”

When Storer’s Derby-based parents, Dawn and Ian, got the call from Auckland doctors six months ago saying their son was in a coma in hospital, they scrambled to get to his bedside.

After a desperate plea to be let into the country, they secured a border exemption and arrived in New Zealand on July 22 and were able to see their son after completing MIQ. Storer’s sister Sian also came to New Zealand but has since returned to the UK.

Storer was released from hospital into rehab on August 18 and into his parents’ care on October 1.

He said he has appreciated spending “quality time” with his family and creating “good memories” since leaving the rehab facility, including visiting the Sky Tower and the beach.

“Me and my dad went swimming in Browns Bay. It was just a good experience, to have a laugh with my dad and got my left arm going a little bit better as well.”

It has been a “long and slow” recovery, Dawn said, but the family were thankful for Josh’s condition today and the support they have received from the New Zealand public, friends and family back in the UK, and the doctors and nurses that cared for Josh at Auckland Hospital, ABI Rehabilitation and MercyAscot private hospital.

Ian said the medical and rehabilitation staff that cared for Josh had been fantastic.

“We would like to thank everyone who has helped us through this long and traumatic experience.Josh’s New Zealand friends and all the well-wishers, we’ve had loads of people over here getting in touch with us. They’ve been incredibly supportive. Josh’s friends have more or less become a second family to us all,” Ian said.

“The people of New Zealand have been absolutely fantastic.”

Ian said “never in a million years” did he think he would see Josh in the condition he was in today after seeing him in hospital.

Medical staff predicted it would take another 18 months to two years before Josh got back to his best state, Ian said.

“What that will be, they don’t know,” Ian said.

“He’s a stubborn bugger and he will fight all the way to get to his best.”

A 56-year-old man has been charged with wounding with intent to cause grievous bodily harm and will appear in court on February 22.