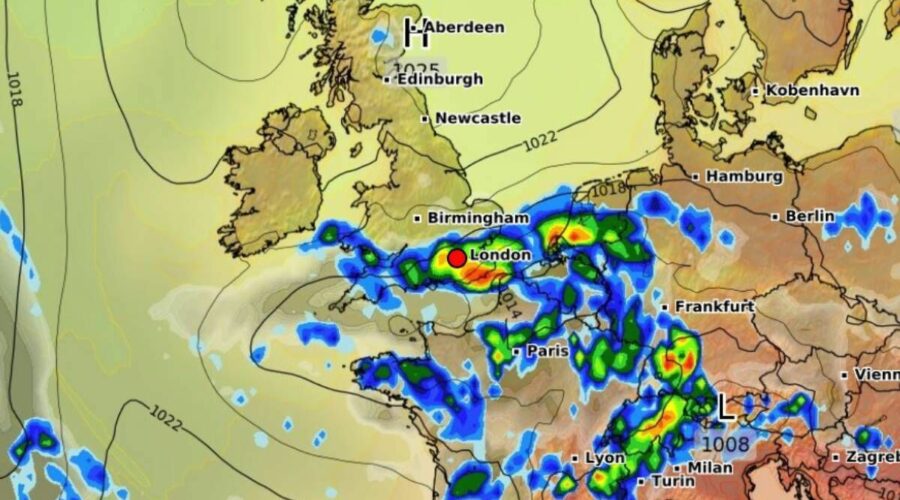 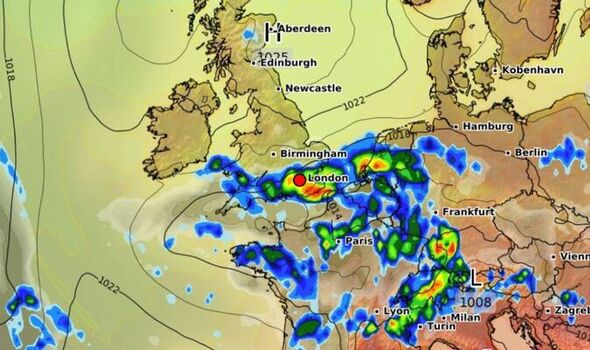 A low-pressure ‘invasion’ from the Continent threatens a ‘volatile’ holiday climax as forecasters warn a ‘major threat’ looms.

After weeks of yo-yoing between scorchers and washouts, with even an icy blast mentioned, the models have dished up their latest offering.

Thursday, Friday and most of Saturday will be largely dry, settled and warm thanks to high pressure over the north of the UK.

However, Saturday night will see storms bulldoze in from the Continent unleashing a ‘dangerous’ deluge across parts of Britain.

Jim Dale, meteorologist for British Weather Services, said: “Over the past weeks the models have been as volatile as the weather now looks later in the weekend.

“The first three days of the holiday look to be the most settled, but there is a big change looming on Saturday night.

“Sunday carries the risk of some very significant thundery downpours, with southern Britain in the firing line for the worst of it.

“With many people planning outdoor activities, this is the sort of weather that could have dangerous implications.”

The first three days of the long weekend will see a mixture of sunshine and showers, although experts agree Britons should enjoy plenty of dry, fine weather.

Temperatures will lift into the high teens widely with London and the southeast looking at 20C or 21C.

Friday will bring showers mainly to the east and west of the country as low pressure churns off the coast of Britain.

Thundery outbreaks could set in across southern and the south-eastern parts on Saturday evening, experts warn.

The south will be in the firing line for the worst of the weather triggered by a ‘battle’ between high pressure over Britain and low pressure arriving from France.

Mr Dale said: “We must look to France for the propagation of some very big showers and a potentially long period of rain and thunder.

“This could present a major threat to outdoor activities, and people attending outdoor parties, or sporting events, especially in high-risk locations, should be cautious of the forecast.”

Rain, hail and thunder will lash western Britain today before sweeping the country through the next 12 hours.

It will turn cooler as temperatures struggle to nudge the seasonal average, according to the Met Office.

Thursday will bring more settled weather for most although low pressure will drive showers across north-western Britain.

A plume of warm air from the south will bring a further risk of rain later in the holiday, the Met Office added.

Deputy chief meteorologist Helen Caughey said: “While it may be an unsettled start to the long weekend for some with showers for Northern Ireland, Wales and western England, many parts will see much more settled conditions over the long Jubilee Weekend, with plenty of dry weather and good spells of sunshine.

“The main source of uncertainty for the weekend itself is to do with how far a plume of warm air, currently across the continent, encroaches over southern areas of the UK from late on Friday.

“The latest outlook suggests that this plume of warm air could bring a spell of showers to southern areas overnight on Friday and into early Saturday, with some showers hanging around for a time on Saturday.

“Further showers are likely for southern areas on Sunday, perhaps the odd heavy one, most likely at this stage for the far southeast.”

Mr Dale, author of Weather Or Not? and an expert in weather impacts and safety, warned Jubilee revellers to prepare for Sunday’s deluge to scupper plans.

He said: “If you have outdoor plans for Sunday, it might be advisable to change them to Saturday.”