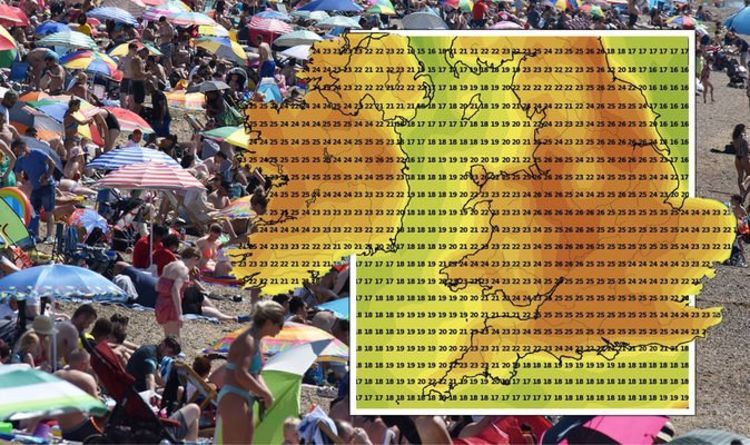 New weather charts and forecasts predict Brits will bask in 26C (78F) heat across the UK on Sunday, August 22nd as high pressure moves in. WXCharts’ maximum temperatures charts show the majority of England except for the East and South-West will see temperatures at 25C (77F) and 26C at 6pm on this day.

The blood orange colours however will not widely extend into Scotland with temperatures expected to be more moderate.

The mercury will be as high as 24C (53F) across the central belt of Scotland and slightly colder in the Scottish Highlands at around 18C (64.4F), according to the maximum temperature charts.

The warm spell is expected to last for around 48 hours and will extend into Monday, August 23rd before cooling.

The charts reveal temperatures by 6pm will maintain a rate of 25C across the Eastern half of England, whilst the Western half will range between 21C (69.8F) and 23C.

Netweather’s long-range forecast said there was quite a “strong signal for above-average pressure during this period” branding the weather pattern a “taste of summer”.

They added high pressure “would cover much of the country” bringing “spells of quiet, dry and probably sunny weather.”

The increased temperatures this time next weekend come after forecasters predicted most parts of the UK would experience showers tomorrow.

READ MORE: First jabs offered to all aged 16 and 17 as new term looms

MeteoGroup, which provides forecasts to the BBC, said there would be showers on Monday morning for northern England as well as parts of Wales and East Anglia.

It will be similar in the afternoon, while the evening shall be dry with moderate north-westerly winds.

It comes as Spain set a new provisional heat record of 47.2C (116.96 F) on Saturday as Southern Europe sweltered under a relentless summer sun.

Italy put 16 cities on red alert for health risks and Portugal warned 75 percent of its regions that they faced a “significantly increased risk” of wildfires.

The high heat comes only days after Sicily reported a temperature of 48.8C (119.84F) on Wednesday, which is also still waiting to be confirmed.