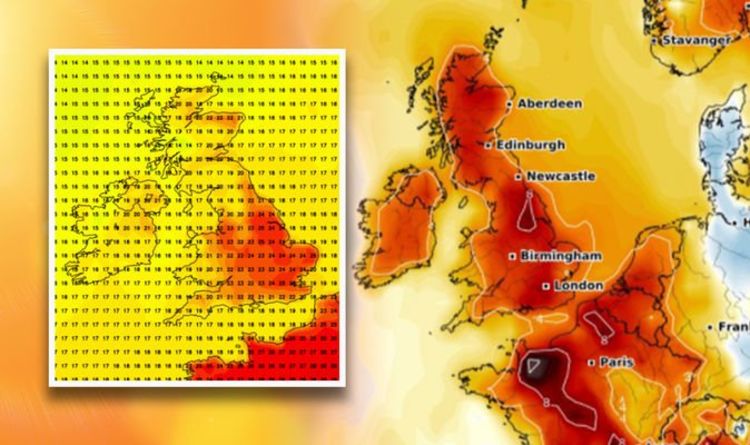 Brits have been suffering through weeks of washout weather, with thunderstorms, torrential rain and fierce winds hitting the UK. Storm Evert hit the country at the end of July, cutting short holidays for some staycationing on the southwest, with gusts close to 70mph hitting near Cornwall. So when will the hot weather return?

Unfortunately for sun-seeking Brits, this weekend is due to be another washout, with Met Office warnings for thunderstorms currently in place.

Temperatures are lingering around the high-teens, early 20C, a far cry from the scorching 30C of early July.

The downpours and lightning storms will be accompanied by a southerly wind, which will linger until Sunday.

Netweather forecasters warn this weekend will be “very wet” for many, but with “short gaps” between downpours if you need to run to the shop or grab some fresh air.

While this weekend is guaranteed to be a washout when exactly will conditions improve?

There’s some good news on the horizon, with higher than average temperatures forecast for the latter half of August.

The forecast reads: “Pressure is forecast to be above normal over Scandinavia and central Europe, promoting a higher than average frequency of southerlies over the British Isles.

“Thus, it will probably again be somewhat warmer than average.

“Again, temperatures are likely to be closer to average for the south-west of Britain.”

However, the country has not fully escaped the thundery showers, as there is a change of downpours and lightning.

Any long-range forecast comes with a caveat when it comes to accuracy, as conditions could change.

Adding to the potential for a scorching August, the Portuguese Institute for Sea and Atmosphere (IPMA) has said swelteringly hot weather could return across Europe.

Hot weather is forecast to bake Portugal in a week, with the mercury predicted to climb to a staggering 35C to 40C by Friday, August 13.

These highs will then head north according to forecasters, hitting the UK by August 20.

As reported in Portuguese newspaper Correio da Manha, forecasters say: “The heatwave raises the alert in Northern Europe towards the possibility of temperatures exceeding 30C from August 20 in the United Kingdom and also in Norway.”

The report states conditions could see heat records broken, with baking temperatures across the UK, France and Germany.

The Portuguese forecasters add the weather will stay hot until the end of the month, bringing a sweltering summer bank holiday.

August’s bank holiday is the last before Christmas and falls on Monday, August 30.

While the Met Office says confidence in this period is low, their forecast states for the end of August the mercury is forecast to again be above average.

Brits could potentially see temperatures hitting 30C, with a benchmark hottest temperatures of the year set in July at 32C.

If these conditions continue into September, the UK could well see an Indian summer.

This is when there is a period of unseasonably warm and dry weather in autumn, typically between September and November.

The Met Office writes the warmest recorded temperatures in the UK in October and November are 29.9C on October 1, 2011, in Gravesend, Kent, and 22.4C on November 1, 2015, at Trawsgoed, Ceredigion.

07/08/2021 World News Comments Off on UK heatwave: Exact date hot weather is set to return to Britain to kick off Indian summer
Markets