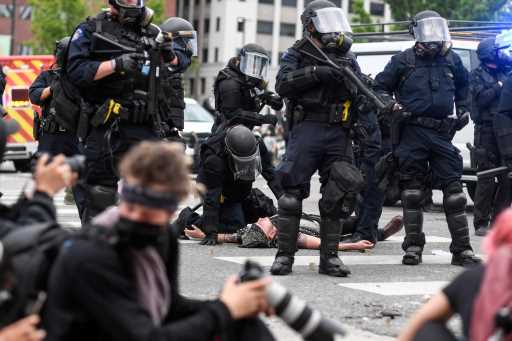 Officer Jesse Trudel twice used pepper spray on people peacefully protesting the murder of George Floyd on May 29, 2020, according to a Denver Department of Public Safety disciplinary letter. Trudel did not give orders to the people he sprayed before using the pepper spray, and body camera video showed the people he targeted were not posing any threat, the letter states.

Trudel’s body camera footage recorded him saying “I’m going to fog this (expletive)” before spraying a woman in the face even though she had her arms down and wasn’t acting aggressively, the letter states.

“Officer Trudel’s comment prior to deploying the OC spray… demonstrates that Officer Trudel targeted this individual with OC spray out of frustration, rather than out of a justifiable need to deploy a chemical agent,” Chief Deputy Director of Public Safety Mary Dulacki wrote in the letter, referring to oleoresin capsicum, or pepper, spray. “This deployment was not used to prevent injury; against an individual interfering with or resisting arrest; or to quell rioting or disperse an unlawful crowd.”

According to the letter, Trudel said it was the first time he was in a “large-scale riot” and that the four to eight hours of crowd control training in the academy was nowhere near sufficient. Trudel joined the department in 2018.

“He stated that he has never felt greater fear for his personal safety or the safety of other officers on the first night of the riots,” the letter states. “He stated that he is unsure if any amount of training could prepare someone for the type of aggression used against the officers that night.”

Trudel is the third Denver police officer to be disciplined for using excessive force during protests of Floyd’s murder in May and June of 2020.

Another officer, Daniel Veith, will serve a five-day unpaid suspension for using his baton to hit a person who was protesting the forced removal of an encampment of people experiencing homelessness on Aug. 19, 2020.

Veith said he hit the person after the person tried to grab his baton and took a “swipe” at him. But video showed that Veith hit the person — whose gender is not identified in the letter — before the person made any move toward him, according to his disciplinary letter.

Veith told investigators that the scene was chaotic and he felt that the officers at the cleanup were on their own with no supervisors to create a plan.

Dulacki found that Veith was within policy when he struck three others with his batons or nunchucks during the incident because the people he hit either attempted to take his baton or tried to hit him or another officer.

Prior to the baton strikes, officers had arrested a man with a pistol in his waistband. Members of the crowd tried to stop the arrest, including by kicking one of the arresting officers in the face and grabbing the arrested man’s legs and trying to pull him from a patrol car.

Veith requested a transfer from patrol, where he had worked for nearly 30 years, to desk assignment after the incident, the letter states.