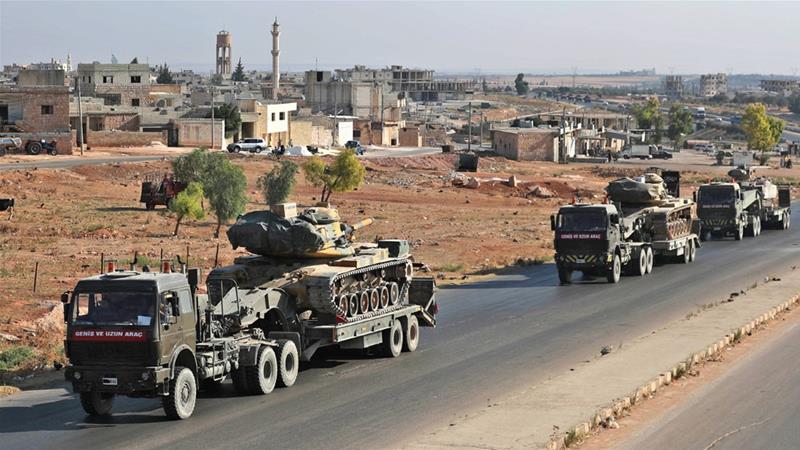 President Recep Tayyip Erdogan will visit Moscow on Tuesday for a meeting with his Russian counterpart Vladimir Putin, the Turkish presidency has said, days after a Turkish convoy was nearly hit by air raids in the Syrian province of Idlib.

Friday’s announcement came as Syrian forces, backed by Russia, continue to make advances into the last rebel stronghold in Syria’s northwest region that borders Turkey. Since late April, Syria and Russia have escalated their bombardment of Idlib, with more than 500 civilians being killed in the hostilities, according to the UN.

A spokesman for the Kremlin confirmed the August 27 meeting, telling the Interfax news agency that the talks would take place during the Maks international air show, located about 40 kilometres outside of Moscow.

Turkey has been a vocal opponent of Syrian President Bashar al-Assad and backs rebels fighting for his removal. However, Ankara last year struck a deal with Moscow to protect the Idlib province from a potential government offensive.

On August 26, air raids nearly hit a Turkish military convoy heading through Idlib province. Turkey’s Defence Ministry “strongly condemned” the attacks and said they were contrary to “existing agreements as well as our cooperation and dialogue with Russia”.

The ministry called for “urgent measures” to prevent a repeat of the incident.

At the time, Turkey said the convoy was heading to one of its observation posts in Morek in northwest Syria, but the Syrian government said it had entered the country carrying ammunition to help opposition fighters who have lost ground this month in the offensive.

Days later, Syrian troops surrounded one of the 12 observation posts set up by Turkey last year along the front line between government forces and rebels near the border. That move again drew rebuke from Turkey, with Foreign Minister Mevlut Cavusoglu saying that Turkish troops would not leave the observation post.

Earlier on Friday, Erdogan and Putin agreed in a phone call to “activate mutual efforts” to ease the situation in Idlib, the Kremlin said.

Erdogan’s office reported that the Turkish leader had told Putin that attacks by regime forces in Idlib “very seriously” threatened Turkey’s national security and led to “a grave humanitarian crisis.”

“These attacks damage the efforts to regulate the Syrian conflict,” the office said.

The visit will come just weeks before Erdogan is set to host Putin and Iranian counterpart Hassan Rouhani for a summit on Syria in Ankara on September 16.

Iran and Russia are allies of Assad, but have worked closely with Turkey for a political solution to the conflict.