Early on in the pandemic, Papua New Guinea, like Australia and New Zealand, was doing well in its fight against the coronavirus.

The country closed its border on March 24, instituted lockdowns and began a series of measures to keep COVID-19 at bay. It worked. Until July 16 it had only 16 confirmed cases and no deaths.

But then the virus escaped a testing lab in the main general hospital in Port Moresby infecting at least four health workers. 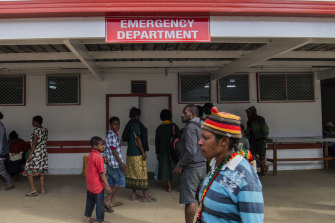 The Mount Hagen provincial hospital’s emergency ward. The PNG government is worried about COVID-19 spreading from Port Moresby to the provinces. Credit:Louise Kennerley

Within 14 days, there would be 72 confirmed cases and two deaths sparking a renewed effort to avert a meltdown of the country's precarious health system should the number of infections break out of the city. Some 87 per cent of PNG's 8.9 million population live in rural areas.

Australia is now sending a medical assistance team (AUSMAT) of specialists and crisis response staff to Port Moresby. In a statement, Alex Hawke, minister for international development and the Pacific, said this team would help improve lab testing, case management, infection control, triage and emergency management, but would first have to follow quarantine requirements on arrival.

The Department of Foreign Affairs and Trade would not say how much money Australia was contributing to the fight in PNG, but the statement said it has "reprioritised a portion" of its development program to provide medical supplies and funds to be used in rural provinces, including for testing. 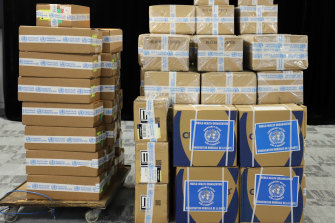 The Australian Defence Force also has 40 personnel on the ground helping with logistics, including plane and helicopter flights for workers and supplies, and the refurbishment of a building to house the country's COVID-19 taskforce headquarters.

China, the United States and the World Health Organisation are also among others providing equipment and support.

All confirmed cases so far are in Port Moresby with the exception of one infected healthcare worker who travelled from the capital to Lae, 300 kilometres to the north, where he tested positive. 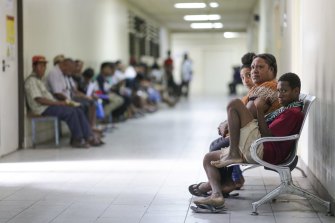 The waiting line at the Port Moresby General Hospital. Tuberculosis and severe malnutrition are huge issues in PNG, and now the country is also grappling with a second wave of COVID-19.Credit:Alex Ellinghausen

The Controller of the National Pandemic Response, David Manning, said now 74 staff of the WHO, World Vision and provincial health authorities in Lae were self-isolating.

"This is very trying time for us" Manning told reporters. He earlier said the statistics were "truly alarming".

"The argument that we are immune from COVID-19 or blessed with protection against the virus can easily be dispelled with what our statistics have shown us."

Dr Henry Ivarature, Pacific lecturer at the Australia Pacific Security College, ANU, who is in Port Moresby awaiting a visa to return to Australia, said the PNG government was "very worried about it spreading across the nation.

"The perfect example is the medical officer who travelled to Lae. He was positive but didn’t know. It’s strange because the government should already know that cases are coming from medical workers and should be a bit more vigilant about medical staff moving about."

"Although the borders remain closed, many people are unaware of the restrictions, and continue to enter and exit through many different routes," he wrote in an Asia & Pacific Policy Society article. Indonesian traders seeking Jewfish, vanilla beans and shark fin, among others, continued to find ways to cross the border, as did Papua New Guineans seeking work on palm oil plantations or medical services on the other side, he wrote.

Awan said particular attention had to be paid to the homeless and those living in shelters and shanty towns in Port Moresby and other cities. He said nearly 40 per cent of the population lived below the poverty line.

The IFRC and PNG Red Cross were helping the PNG Department of Health with funds, staff and 400 volunteers as it prepares for an increase in cases. It will switch from "community engagement" and awareness campaigning to helping with testing, contact tracing, managing isolation centres and support services.

"We are going to supplement the government wherever they need," he said.

Get our Coronavirus Update newsletter for the day’s crucial developments at a glance, the numbers you need to know and what our readers are saying. Sign up to The Sydney Morning Herald’s newsletter here and The Age’s here.