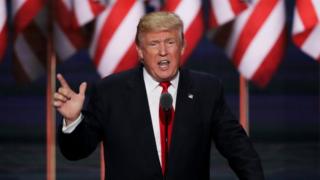 US President Donald Trump has threatened to relocate the Republican National Convention if restrictions are placed on the crowd size due to the coronavirus pandemic.

The event is due to take place in North Carolina from 24-27 August.

On Monday, however, Mr Trump said he would move the site of the convention if “full attendance” is not guaranteed.

Almost 100,000 people have died with coronavirus in the US. Many states have enacted measures to stop its spread.

In a series of tweets posted early on Monday, Mr Trump said that North Carolina’s Democrat Governor Roy Cooper was “still in shutdown mood” and was “unable to guarantee” that the event would take place at full capacity in Charlotte as originally planned.

“In other words, we would be spending millions of dollars building the arena to a very high standard without even knowing if the Democrat governor would allow the Republican party to fully occupy the space,” said Mr Trump.

Republicans planning to attend the convention “must be immediately given an answer by the governor as to whether or not the space will be allowed to be fully occupied”, the president said, otherwise another site would be selected.

A spokesman for Governor Cooper said North Carolina was “relying on data and science to protect our state’s public health and safety”.

“What you hear the president saying today is just a very reasonable request of the governor of North Carolina,” Vice-President Mike Pence told Fox & Friends in response to Mr Trump’s tweets.

“We all want to be in Charlotte, we love North Carolina,” he continued. “But having a sense now is absolutely essential because of the immense preparations that are involved, and we look forward to working with Governor Cooper, getting a swift response and if need be moving the national convention to a state that is further along on reopening and can say with confidence that we can gather there.”

What are the conventions?

Presidential hopefuls do not become official candidates until each party’s nominees for president and vice-president are announced at their national convention, and so the events are a key part of the election process ahead of voting on 3 November.

Mr Trump is seeking a second term in office and there are no other Republicans standing.

The Democrats moved their convention back a month to mid-August because of the coronavirus outbreak.

Former Vice-President Joe Biden is the Democratic presumptive nominee after Senator Bernie Sanders became the last candidate to leave the race in April.