President Trump, who has spent the past several months baselessly arguing that Democrats might try to steal the November election from him, now says that the Senate must quickly confirm a new Supreme Court justice to replace the late Ruth Bader Ginsburg in case the court has to rule on the outcome.

“We need nine justices,” Trump said at the White House Tuesday. “You need that with the unsolicited millions of ballots that they’re sending. It’s a scam. It’s a hoax. Everybody knows that. And the Democrats know it better than anybody else. So you’re going to need nine justices out there. I think it’s very important.”

And in an interview with ABC News on Sunday, Republican Sen. Ted Cruz also said a new justice should be confirmed by Election Day in case it needs to weigh in on results.

“An equally divided court, 4-4, can’t decide anything,” Cruz told George Stephanopoulos. “That could make this presidential election drag on weeks and months and well into next year. That is an intolerable situation for the county. We need a full-court on Election Day given the very high likelihood that we’re going to see litigation that goes to the court. We need a Supreme Court that can give a definitive answer for the county.”

The Supreme Court had a pivotal role in deciding the 2000 election. In a 5-4 decision, the court’s conservative majority ruled that an ongoing recount in Florida must stop, effectively handing the state and its 25 Electoral College votes to Republican George W. Bush, who was declared the winner as a result. 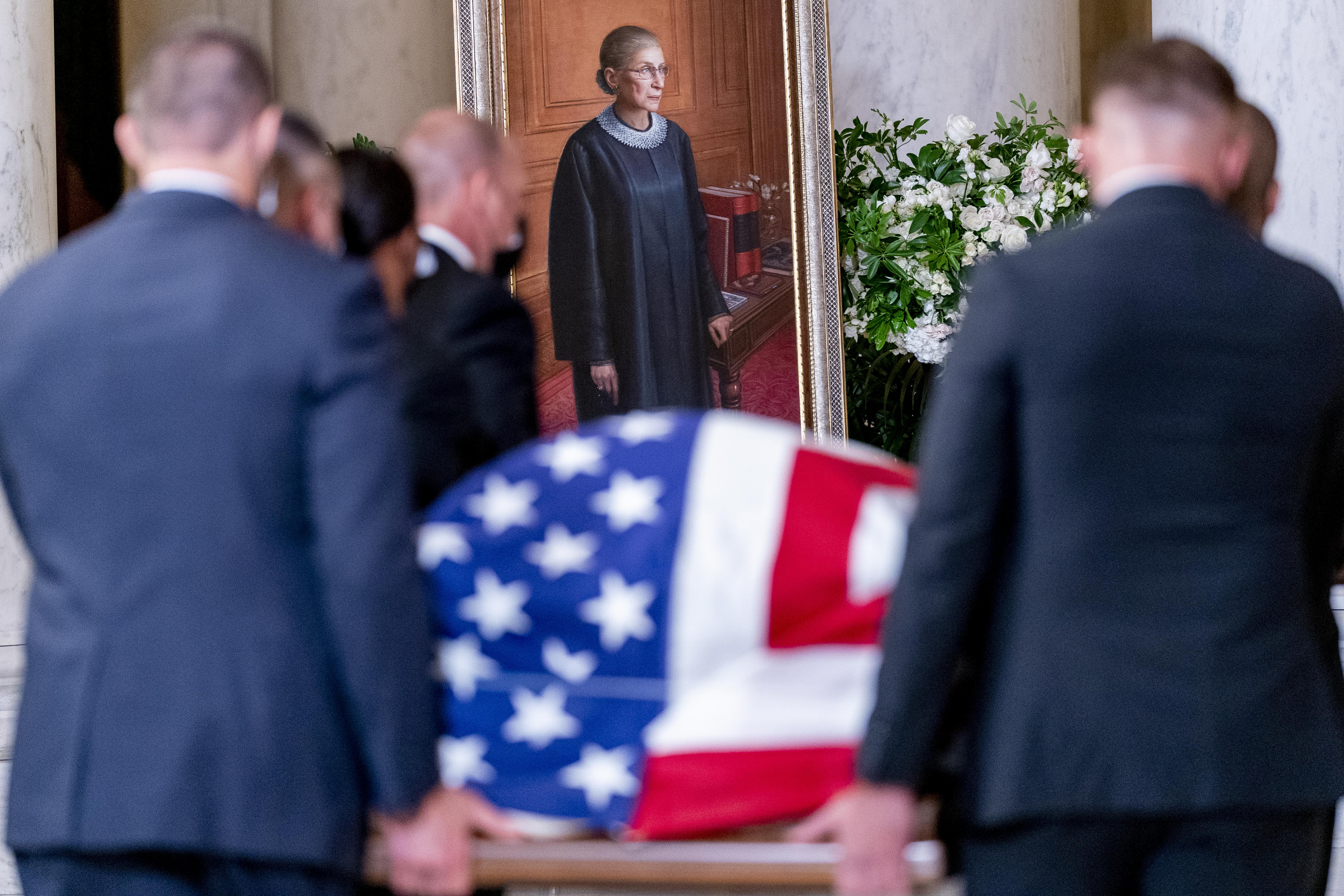 Ginsburg died Friday at age 87 of cancer complications after serving nearly three decades as an associate justice on the Court. Trump said that he would announce his nominee to replace Ginsburg on Saturday. Republicans control the Senate by a narrow 53 to 47 majority, and it appears Senate Majority Leader Mitch McConnell may have the votes to confirm a nominee. If the GOP is successful in installing a new justice, it would give the court a 6-3 conservative majority.

Trump has repeatedly refused to say whether he’ll accept November’s results, saying at August’s Republican National Convention, “The only way they can take this election away from us is if this is a rigged election.” And despite the coronavirus pandemic that has killed more than 200,000 Americans and led to a dramatic increase in mail-in balloting, Trump has continually insisted, without evidence, that voting by mail will result in an election ripe with fraud. It’s an escalation of the conspiracy theory that millions of people vote illegally, a baseless assertion he has pushed since losing the popular vote to Hillary Clinton in 2016.

In August, Trump told Fox Business that he was withholding funding for the U.S. Postal Service in order to limit their abilities to handle ballots.

“They want $3.5 billion for something that will turn out to be fraudulent, that’s election money basically,” Trump said. “They want $25 billion, billion, for the post office. Now, they need that money in order to have the post office work so it can take all of these millions and millions of ballots. Now, in the meantime, they aren’t getting there. By the way, those are just two items. But if they don’t get those two items, that means you can’t have universal mail-in voting.”

In July, Trump floated the idea of delaying the election, which is something he does not have the power to do, as the date of the election is decided by Congress. In March, Trump criticized initial Democratic attempts to fund mail-in voting in the first round of pandemic relief legislation, but also admitted that increased ballot access would probably be bad for Republicans. He told Fox News that such expansion would lead to “levels of voting, that if you ever agreed to it you’d never have a Republican elected in this country again.”

With Democrats more likely to vote by mail, it’s possible that, in some key swing states, Trump will have an Election Night that evaporates once mail-in ballots are counted in the days that follow. Democrats are worried that, in this scenario, Trump will claim victory on the night of the election and then refuse to concede when mail-in ballots give Joe Biden the lead. 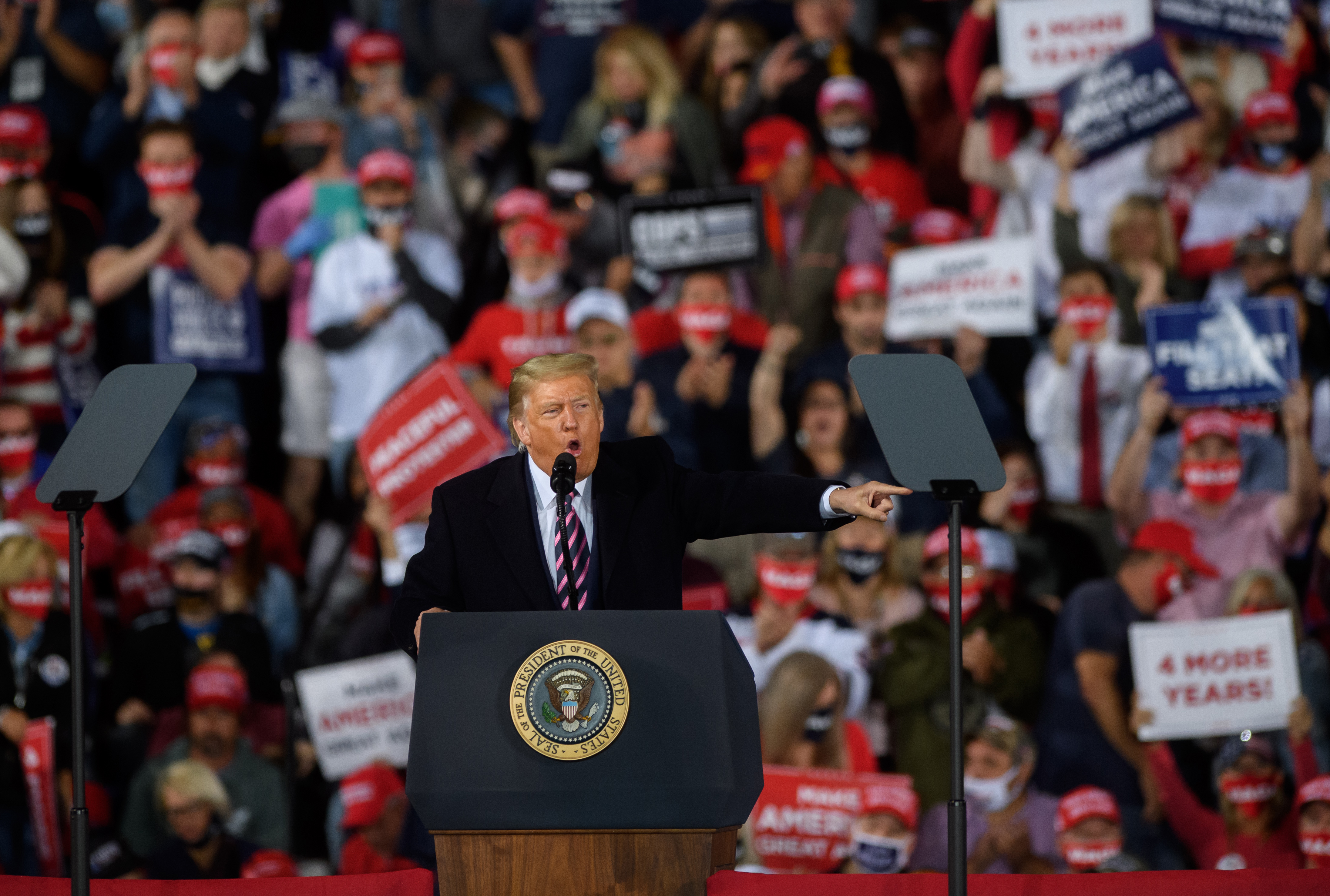 Many observers now expect that Americans will not know who won the election until days or weeks after November 3rd. In 2018, the full extent of the Democrats’ midterm success wasn’t clear until weeks later, when races were called in a number of House races and the U.S. Senate seat in Arizona. And this summer, mail-in ballots similarly caused results to be delayed in a number of primaries.

On Wednesday, The Atlantic reported that Republican legal teams at the state and national levels are working on contingency plans should the vote count drag out. But if current polls are accurate, it’s possible that Biden wins comfortably and there’s no need for legal wrangling. Robert Bauer, a senior adviser to the Biden campaign who is overseeing their legal operation, told Yahoo News Tuesday he expected a smooth process.

“I think some of what you hear in the public space on this subject is a little bit fantastic and for awhile, for example, people really wondered, ‘Well, could literally Donald Trump by emergency decree alter the date of the election?’” Bauer said.

“I think we have to separate some of the fact from the fiction here, particularly because I’m concerned that voters are going to be completely bewildered and wonder whether there is an electoral process that they really ought to bother participating in. I think the election will come off successfully.”

More from Yahoo News:
Sign up for the Yahoo 2020 Election Newsletter
Husband of Scarborough aide who died in 2001 speaks out about Trump’s conspiracy tweets: ‘It’s just inhuman’
Everything at stake in the upcoming Supreme Court battle
As Trump courts Black voters, critics see a ‘depression strategy’
The CIA sent a team of 4 operators on a spy mission targeting China. None came back.
PHOTOS: Justice Ruth Bader Ginsburg — A look back