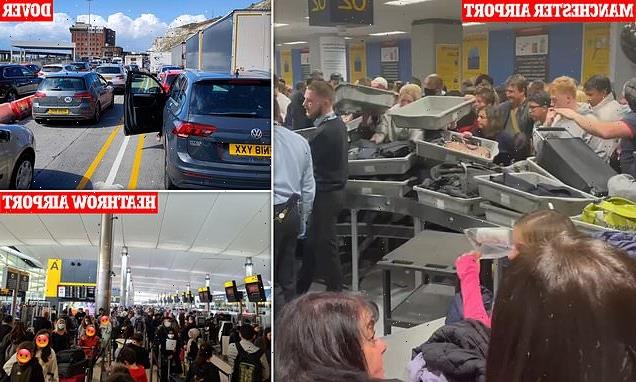 British holidaymakers have been met with chaos today as airports and ferry services struggle to cope with an influx of families looking to get away for the Easter half term break.

The situation was worsened by families flocking to Kent in search of a sunny staycation.

Severe delays were also reported at Heathrow Airport on Saturday, with some passengers left waiting for over an hour on air bridges. Arrivals also continued to face delays, with one complaining of waiting up to an hour to disembark their aircraft.

It comes as industry leaders today warned the travel misery would likely last until at least the summer.

The delays have been blamed on crippling staff shortages, with tens of thousands of staff needed to fill the void – with 12,000 needed at Heathrow alone.

Some 400 new staff are being sworn in at Manchester Airport this month after travellers were forced to queue for hours at check-in and baggage reclaim on Friday. 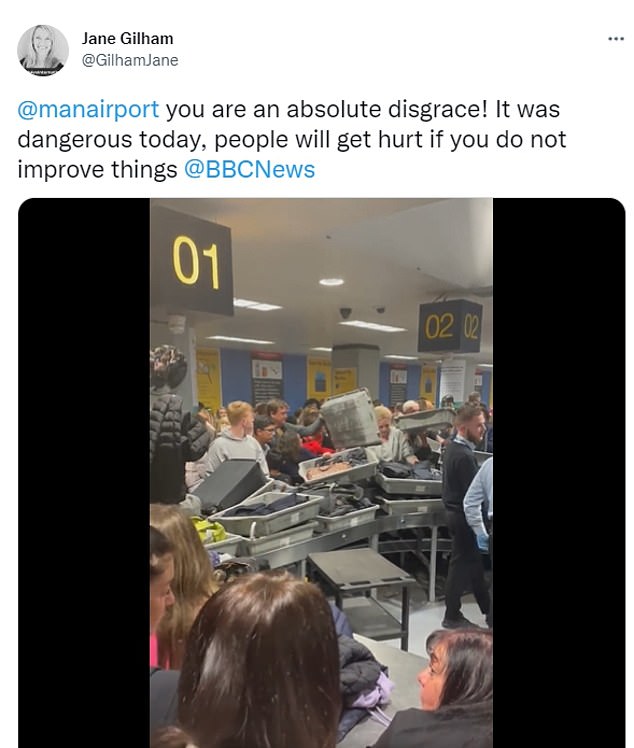 Manchester Airport has struggled to cope after seeing passenger numbers explode, with figures for February showing a huge year-on-year increase, from 70,000 passengers to more than two million. (Pictured: Chaotic scenes at security on Friday) 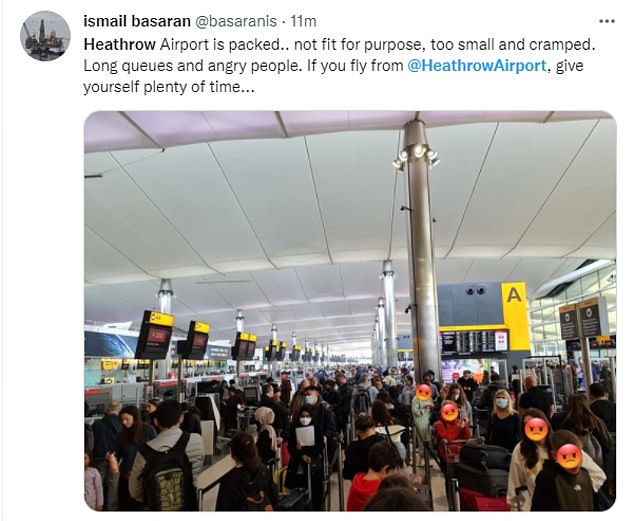 Severe delays were also reported at Heathrow Airport on Saturday (pictured), with some passengers left waiting for over an hour on air bridges 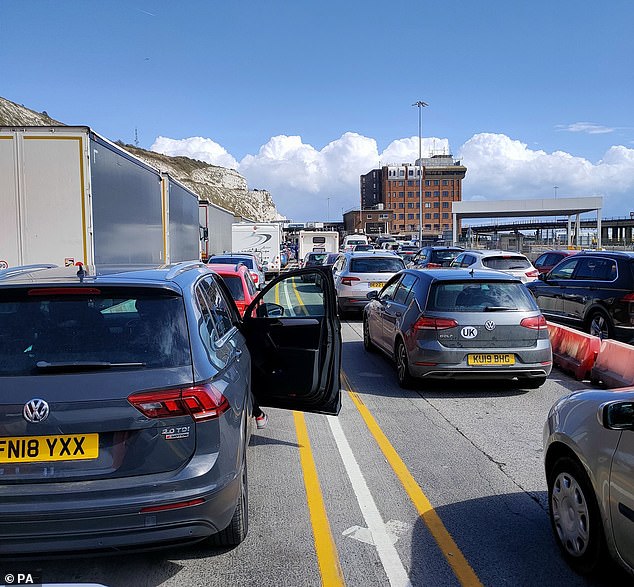 Gridlocked traffic en route to Dover port (pictured) stretched for miles, with scores of tourists missing their ferries to Calais

Fuming holidaymakers branded the transport hub ‘the worst in Europe’ for failing to prepare for the spike in travel following the easing of Covid restrictions.

One fed-up passenger fumed: ‘@manairport you are an absolute disgrace! It was dangerous today, people will get hurt if you do not improve things.’

Others reported queuing for four hours to get through check-in and security, with several missing flights, while one added: ‘Manchester Airport is a disgrace, dangerous and a shambles.’

Images shared online showed suitcases piling up and falling off the conveyer belt, with some becoming visibly damaged. 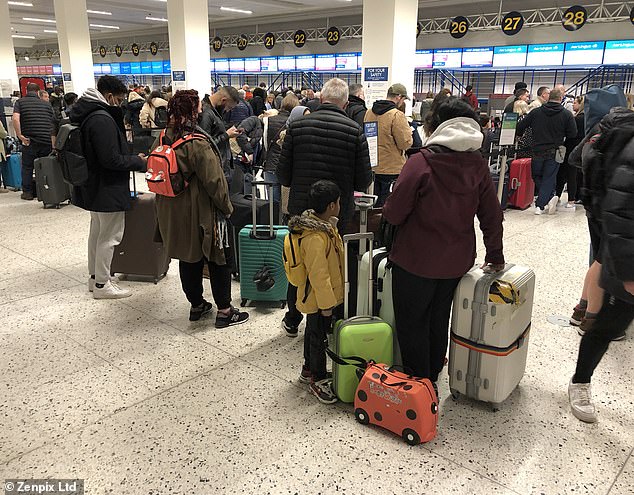 Hours-long queues have been reported at Manchester Airport (pictured) 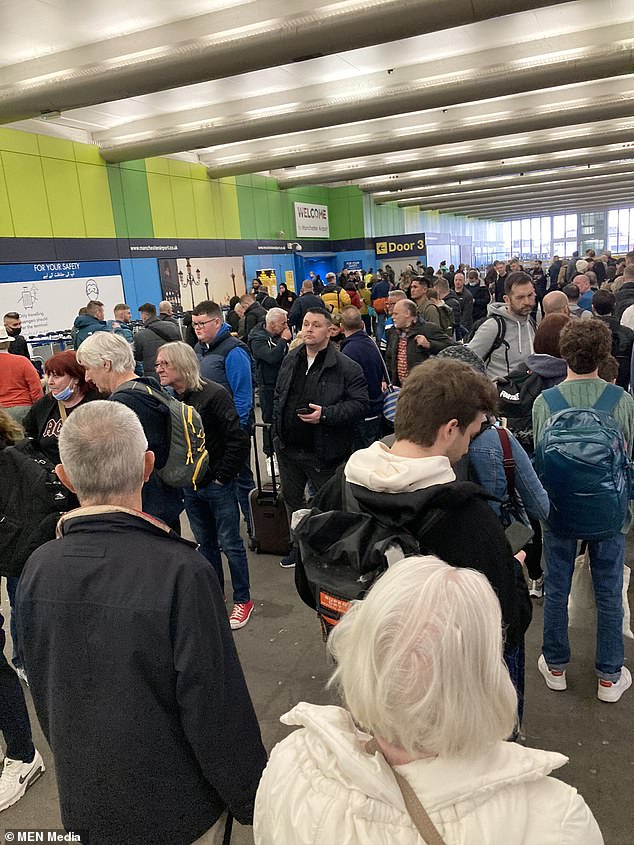 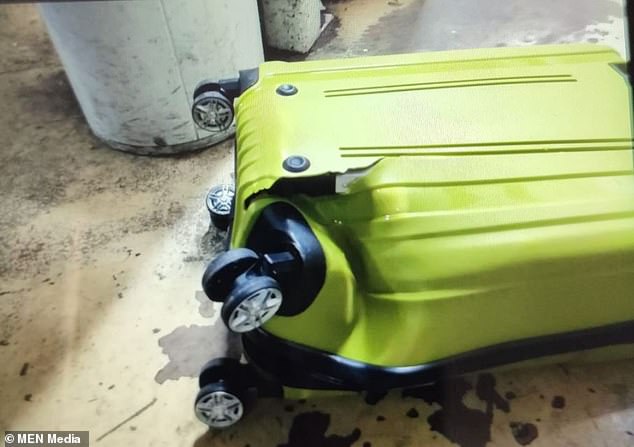 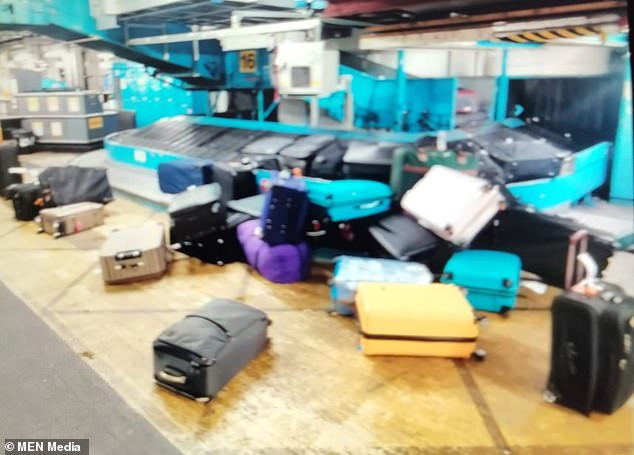 The airport has struggled to cope after seeing passenger numbers explode, with figures for February showing a huge year-on-year increase, from 70,000 passengers to more than two million.

Following a meeting with airport bosses, councillor Pat Karney – who previously warned that the travel hub’s reputation was ‘nosediving’ – said they had come up with a six-point plan to fix the issues.

He also said the airport needed to ‘level with the public’ after being told of problems he had not been aware of, adding: ‘To be brutally honest, we’re going to have delays and queues over Easter’.

Bosses have already been forced to apologise for agonising waits in recent weeks, with staff shortages and sickness due to Covid being blamed for placing operations ‘under extreme pressure.’ 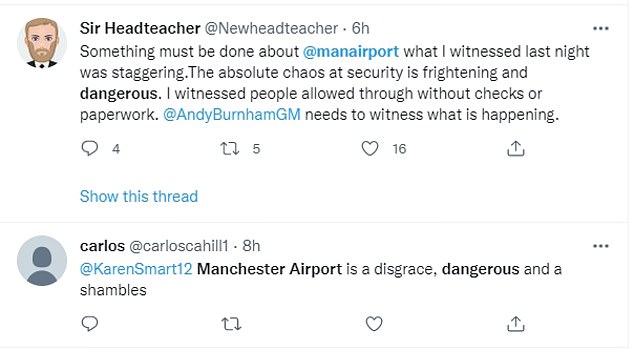 Cllr Karney said airport management had ‘totally underestimated the recovery time of the airport’, adding that such disruption is likely to last until the summer.

‘Two million people went through the airport in February [and] in the previous year, it was 70,000, so you had to plan ahead,’ he said.

He added: ‘I don’t think their planning has been really up to scratch. There’s been a failure of management.’

Karen Dee, Chief Executive of the UK’s Airport Operations Association, told BBC Breakfast: ‘At the start of the year we were under travel restrictions that meant there were virtually no passengers, and what airports have had to do is really scale up in a very short space of time.

‘The industry as a whole is scaling up and we are doing this as fast as we can.’

She said the industry needed to recruit ‘tens of thousands’ of staff as it scales-up after Britain’s Covid-19 restrictions on travel were removed.

However she warned: ‘We do think there will be queues in peak times over the Easter period.’

‘We’ve started this process some time ago, but actually with those scale of numbers, particularly in a tight labour market, it is going to take us some time unfortunately,’ she added.

She told those planning to fly: ‘Check with the airline you are flying with because they will not want people arriving before they are permitted to check-in.

‘Make sure you’re looking at the types of documents that you need because that will speed through your check-in too. 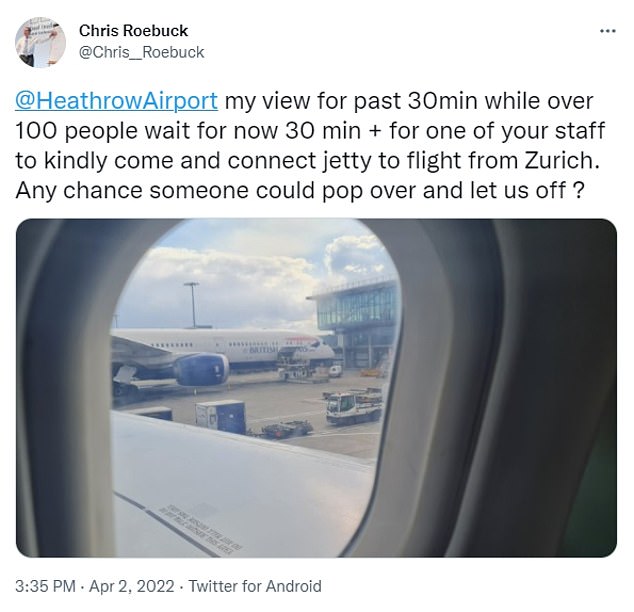 Heathrow said it was aware of delay today as passengers branded it a ‘shambles’ and claimed they waited for over an hour on air bridges. Arrivals also faced delays.

‘When you’re approaching security, think, ‘Do I have liquids?’, ‘Do I have a laptop?’ – all of those things that we’ve actually forgotten about because we haven’t travelled for so much time.’

It comes as lorries and motorists are also facing long delays to board ferries at the Port of Dover.

Cross-channel ferry capacity between Dover and the French port of Calais has been disrupted after P&O Ferries services were suspended following its sacking of 800 workers last month.

The company is yet to be given clearance to resume sailings using cheaper agency staff.

Poor weather overnight has made the situation worse, as have tourists travelling to Kent for an Easter getaway.

Nick Gale, a teacher taking his family to Calais for a trip to Amsterdam, told Sky News they had been stuck for ‘over two hours’ and missed their ferry.

‘No communication at all from port staff. Policeman said it was basically the perfect storm, less ferries… plus bad weather and (the) P&O issue,’ he said.

One woman waiting in the traffic jam said: ‘It’s taken about an hour to move half a mile, if that and we’ve missed our ferry crossing now, so we’re just deliberating whether it’s worth going home or sitting it out.’

‘We are aware of queues at Dover, and the Kent Resilience Forum and local partners are working to minimise any disruption by deploying temporary traffic management measures,’ the Department for Transport said in a statement.

‘This has been caused by a number of factors, including severe weather in the Channel.’