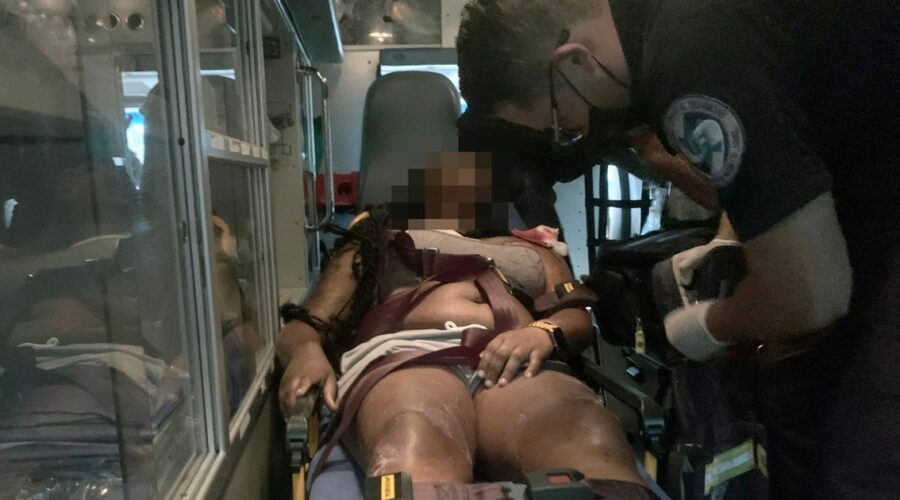 An American tourist was shot by a stray bullet following a cartel assassination at the popular Mexican hotspot of Cancun.

Gunmen were reportedly on jet skis as they carried out the shooting, which took the lives of the two people, both believed to be males.

The hitmen fired their weapons from their jet skis in the sea within the hotel zone of Playa Tortugas.

The prosecutor’s office in the state of Quintana Roo said the two men apparently died of bullet wounds at the scene.

They added that a foreign woman had been wounded in the incident and was taken to a local hospital for treatment. The woman, who was wearing a bikini at the time of the incident, was hit by a bullet in the left shoulder after being caught in the crossfire.

Footage has been shown of the woman being wheeled into an ambulance by medics with one of them applying pressure with a white cloth on the woman's shoulder.

According to footage published by De Peso, she was asking for water because of the heat.

The two bodies were kept under a blue tarp at the entrance of a souvenir shop, next to outdoor seating of some white plastic tables and chairs.

De Peso reported that investigators carried out forensic work in hazmat suits and were seen near a palm tree where one body was on the ground.

The publication also reported that neither of the people on the ground showed any signs of life.

The alleged shooters fled on their jet skis following the attack as the beach area was quickly cordoned off to allow Quintana Roo Attorney General's Office investigators to assess the area for clues.

Despite the incident, violence in the coastal state of Quintana Roo has declined in recent years with 209 killings in the first four months of 2021, which is down from 266 during the same period of 2020.