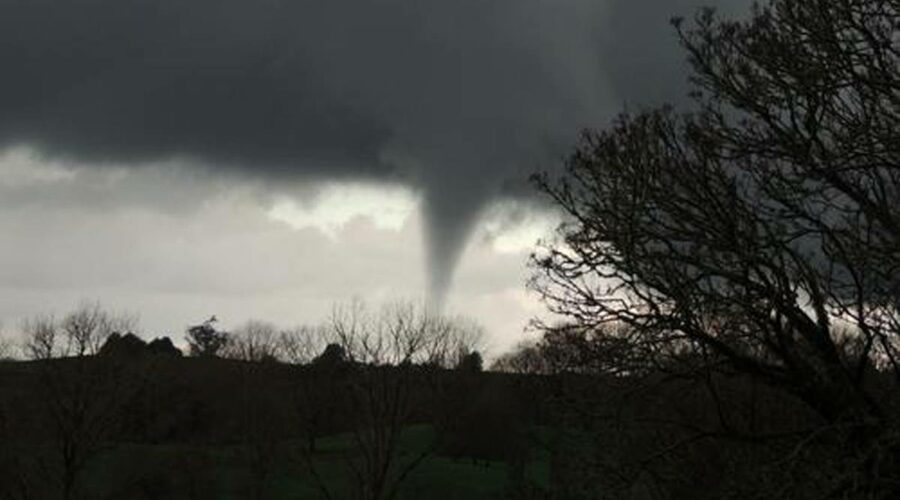 Today’s terrifying tornado in Papatoetoe was a reminder that big tornadoes can and do hit New Zealand – although they remain fortunately rare.

On average, about seven to 10 moderate to strong tornado events are reported each year.

They are typically 20-100m in diameter, track for just a couple of kilometres, and last only a few minutes.

Because they’re extremely localised, the damage they cause is very confined to the tornado itself, although the violent winds can fling debris hundreds of metres.

On the tornado-measuring Enhanced Fujita (EF) scale, New Zealand’s tornadoes are almost always either EF0 and EF1 – that’s wind speeds of 105-137km/h and 138-177km/h respectively – and far from the likes of EF5 tornadoes that rage harder than 322km/h.

Most of the ours are associated with pre-frontal squall lines – bands of thunderstorms embedded in a strong, unstable pre-frontal northwesterly flow.

Thunderstorms have very strong updrafts and if they happen when winds rotate counterclockwise as the air rises, the updraft can start to spin and a mesocyclone can form.

Tornadoes are spawned from these mesocyclones, which can be as little as 1-2km across.

The main warning signs are hail or heavy rain followed by dead calm or a fast, intense wind shift – and a loud continuous roar or rumble, much like the sound of an approaching freight train.

Other signals are large, dark, low-lying clouds, or clouds filled with debris.

Auckland is hit by a tornado on average less than once a year, but there’s much variation from year to year, with some years seeing no tornadoes at all.

A tornado that ripped through Hobsonville in 2012 killed Keith Langford, Brendon Johnson and Tom Stowers when they were crushed beneath concrete slabs at a construction site.

Another lethal tornado struck at Frankton, Hamilton, in 1948, carving a 100m to 200m swathe through the suburb and killing three people.

Taranaki, where a tornado hit Opunake this year, was another hotspot – but more so between Motonui and Oakura.

Over two days in July 2007, a swarm of at least seven tornadoes hit the Taranaki coast, causing widespread damage in the region. Another that struck near Waitara in 2004 killed two people.

Still, the tornadoes recorded here weren’t as common and destructive as those notorious twisters seen across the plains of the US’ “Tornado Alley”.

The Moore Tornado that hit Oklahoma in 2013, killing 23 people, came with winds that reached 321km/h.

There appeared to have been fewer tornadoes around New Zealand over recent years, although such events were probably under-reported as they tended to hit remote spots and cause little damage before fizzling out.

It was a big reason the history of tornadoes here had not been studied in detail – and why it was harder to tie them to climate patterns such as La Nina or the Pacific Decadal Oscillation.

Although climate change was expected to bring more severe storms to New Zealand over coming decades, it’s harder to tell whether that will also mean a higher likelihood of tornadoes.

19/06/2021 World News Comments Off on Tornadoes explained: All you need to know about NZ and twisters
Markets