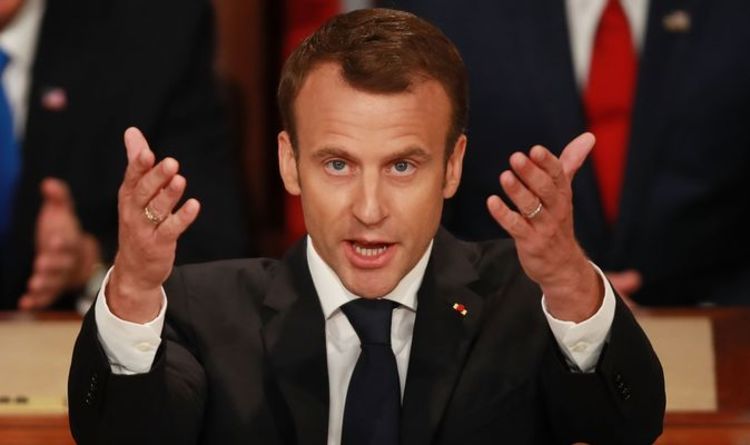 The French President has gone to war with vaccine sceptics following widespread protests across the country. Hundreds of thousands of people have taken to the streets in recent weeks against mandatory health passes and President Macron has accused those citizens involved of “losing all logic” and vowed not to back down to “radical violence”.

Speaking to French magazine Paris Match, Mr Macron added: “I consider that the very existence of democracies is at stake.

“Their attitude is a threat to democracy. They confuse everything.

“I think they are creating permanent disorder because they dispute the existence of the republican order.

“It is serious because words have a meaning.”

Last month, President Macron announced doctors, nurses and administrative staff must have a COVID-19 vaccine by September 15 or they risk losing their jobs.

From July 21, the French public has also had to provide proof of vaccination, immunity or a recent negative test in order to gain entry to public spaces such as trains, cinemas and restaurants.

The under fire leader has defended his strategy towards coronavirus by insisting the measures have been implemented through democratic processes and backed up with science.

Mr Macron said: “We have never suspended parliamentary life, and all restrictive measures have been passed by law.

“We are the only country which had so many parliamentary controls during the crisis. And they talk about dictatorship?

“The government responds to parliamentary commissions of inquiry, to the Court of Justice, to magistrates. Epidemiological data are public and daily. Be serious.”

Mr Macron also acknowledged the enforcement of compulsory vaccinations for some healthcare workers was a “difficult decision”.

The tone the French President has taken to those who do not conform to the guidance has sparked fury from some of his rivals.

Francois Asselineau, former member of the National Rally and founder of the Popular Republican Union, has accused Mr Macron of stoking the anti-vaxx movement.

He said: “Macron increases provocation by insulting hundreds of thousands of demonstrators.

“A head of state should have the objective of calming things down. Not Macron. He throws fuel to the fire of an already explosive situation!

Jerome Riviere, National Rally MEP, has also hit out at President Macron for increasing divisions across the country.

He tweeted: “In his interview to @Paris Match, Macron addresses the tens, hundreds of thousands of French people who are against the Health Pass in a way that is totally inappropriate for a president: insult, contempt and arrogance.

“With this new provocation he divides France even more, a dangerous bet.”