Ground Zero falls silent as hundreds gather to commemorate the 18th anniversary of 9/11 that claimed 2,977 lives

Hundreds are gathering at Ground Zero in New York City on Wednesday to observe the 18th anniversary of the 9/11 terror attacks that took 2,977 lives and left a scar in the heart of America.

On Wednesday Americans are urged to ‘never forget’ the terror attacks nor the emergency first responders who lost their lives in their heroic rescue efforts.

Today bells will toll in New York, Shanksville, Pennsylvania and President Donald Trump will speak from the Pentagon to commemorate the devastating attacks.

Relatives and friends of the victims of the attacks gathered for the ceremony at Ground Zero Wednesday morning where the names of each of the victims will be read out, some seen clutching photos of their loved ones.

President Donald Trump will speak at the Pentagon, where the third plane exploded, while Vice President Mike Pence will speak near Shanksville, Pennsylvania, where heroic passengers brought down the fourth jet before it could reach Washington.

Former President George W. Bush, the commander-in-chief at the time of the 2001 attacks, is due at an afternoon wreath-laying at the Pentagon. 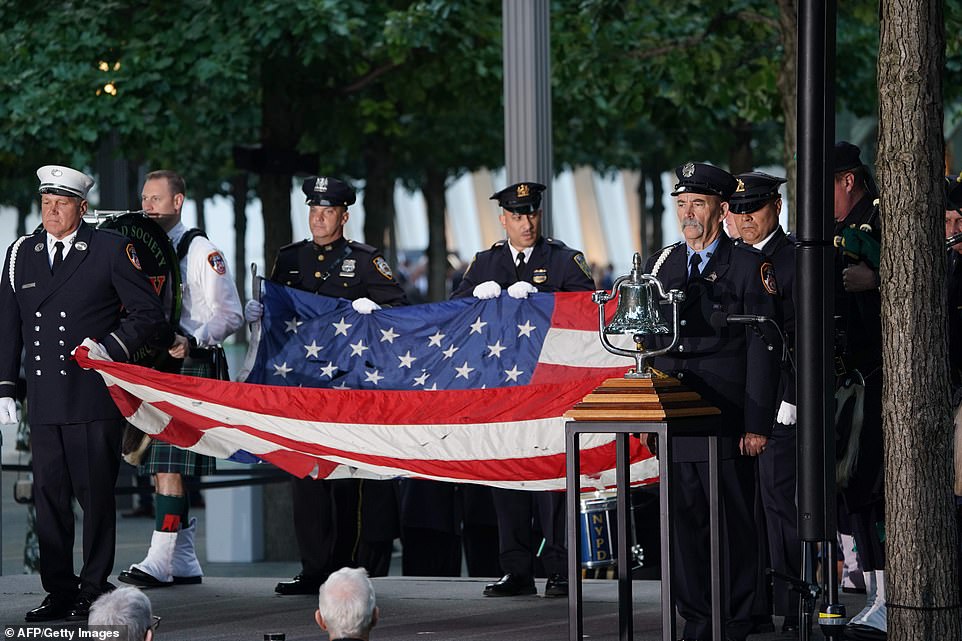 Hundreds are gathering at Ground Zero in New York City to commemorate the 18th anniversary of the horror 9/11 attacks that took took 2,977 lives 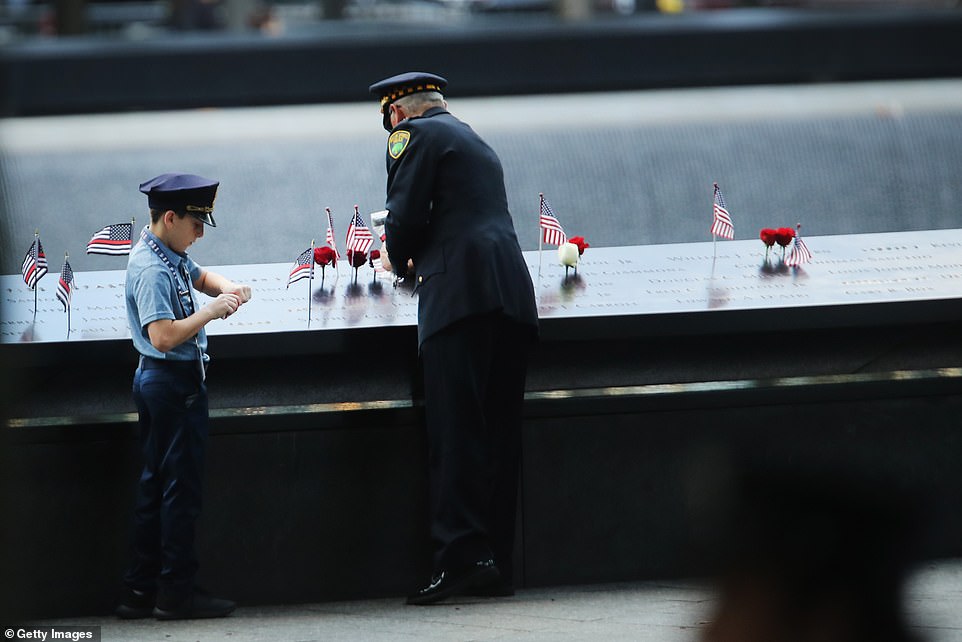 Sam Pulia and his grandson Sammy Pulia place American flags next to the name of a relative who was a firefighter killed in the terrorist attacks at the National September 11 Memorial on September 11, 2019 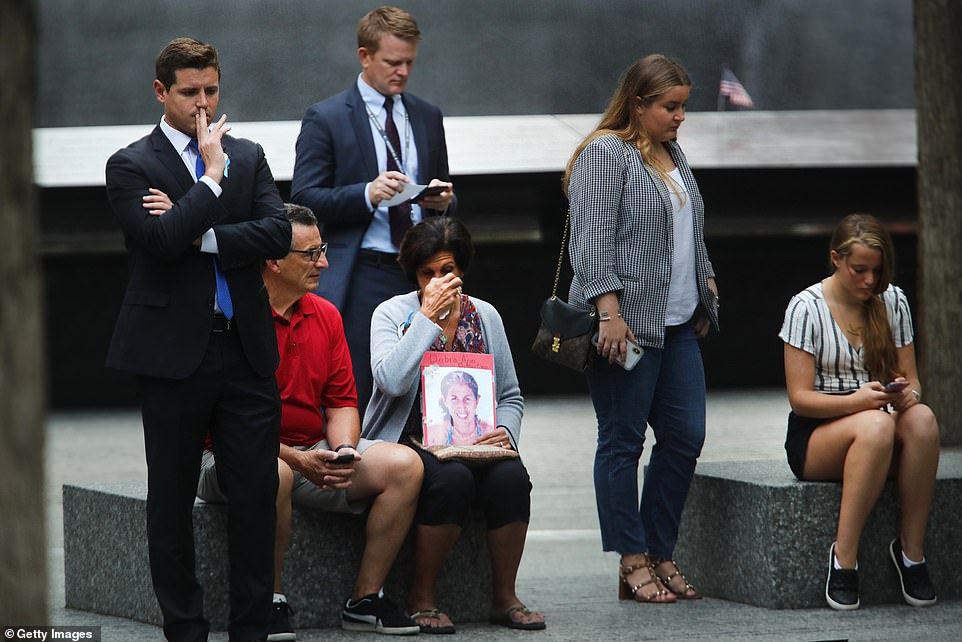 Relatives of the victims were invited to the site to hear their loved ones names read out and the museum was closed to family only. Some were scene carrying pictures of their loved ones 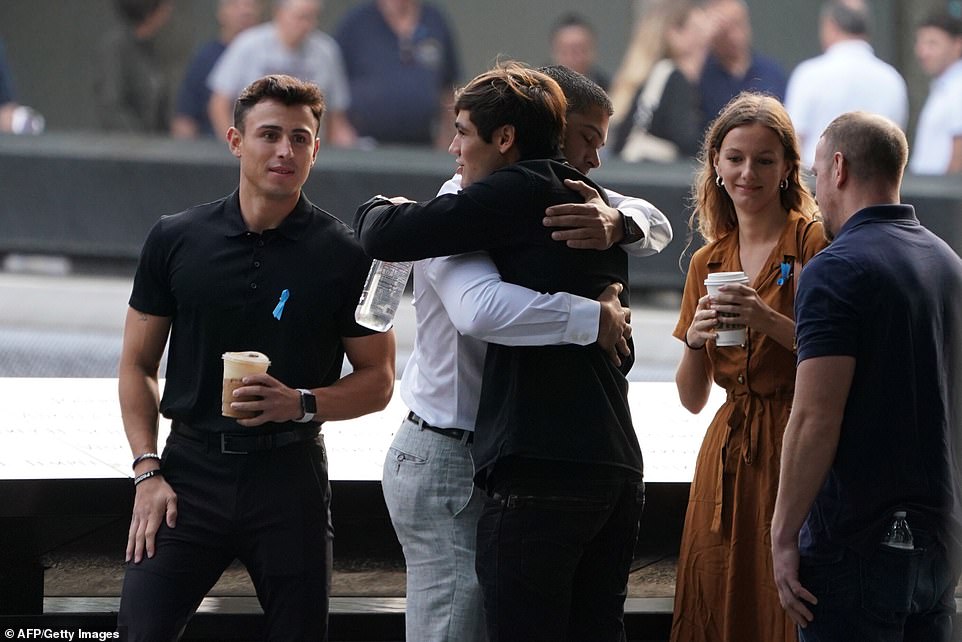 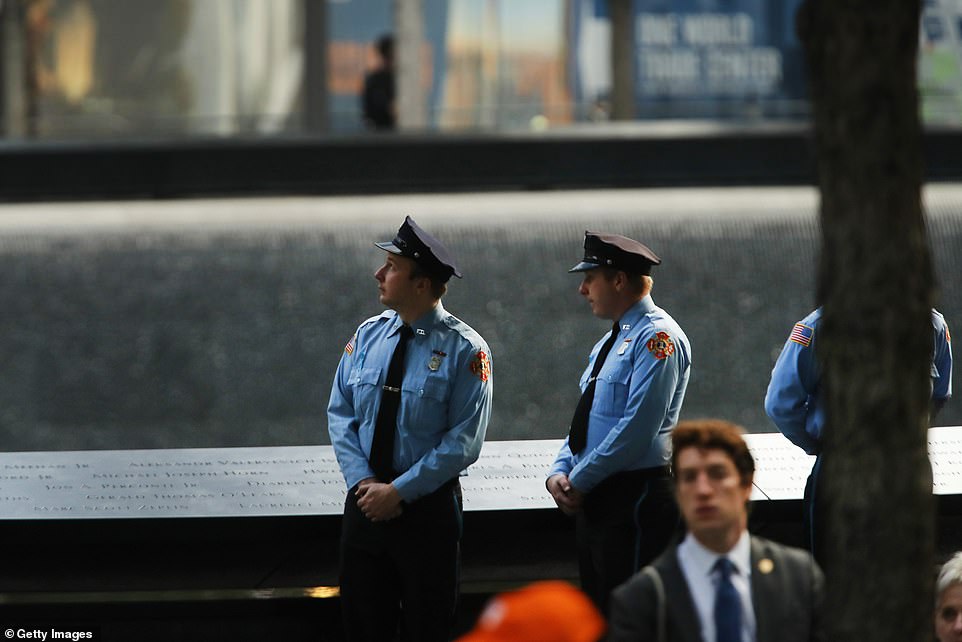 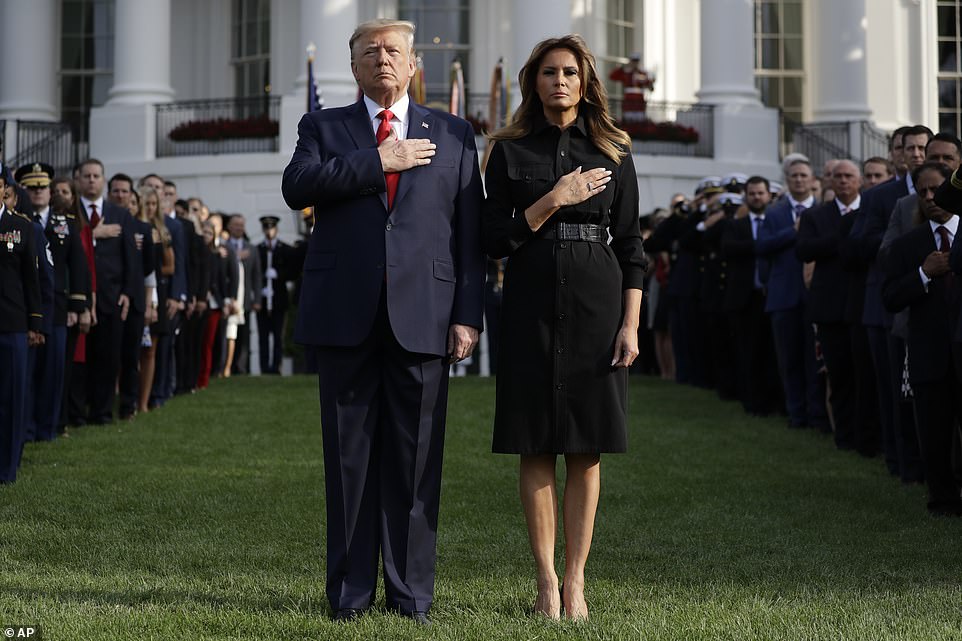 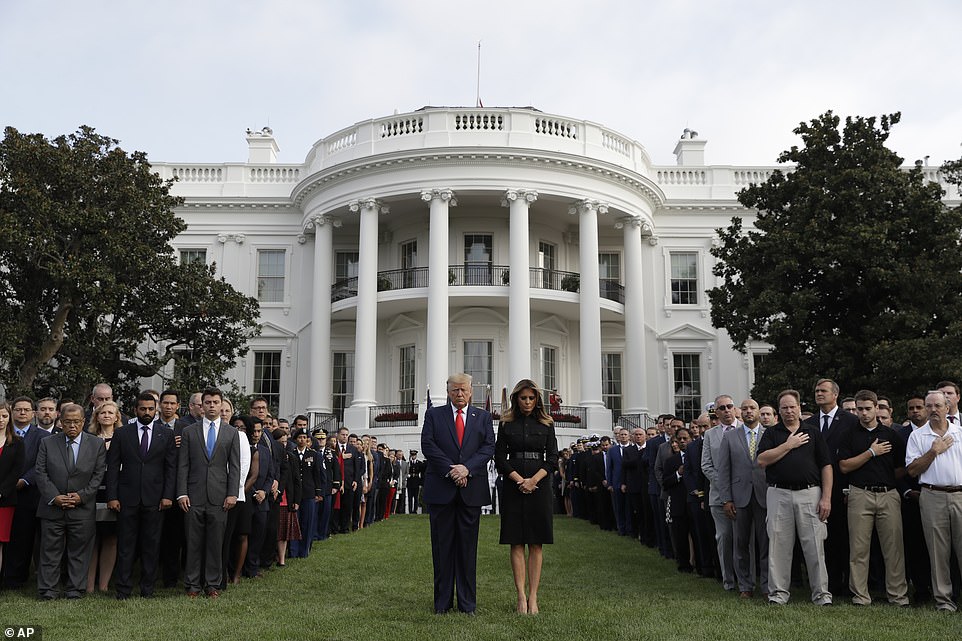 Nearly 3,000 people were killed when terrorists hijacked planes and drove them through the World Trade Center, the Pentagon and into a field near Shanksville, Pennsylvania on September 11, 2001.

The Wednesday ceremony started at approximately 8.46am – the moment Flight 11 struck the north twin tower of the World Trade Center. At that same time, bells at houses of worship across the city rang out to mark the moment.

Early Wednesday police, firefighters and bagpipers were on the scene going through early morning rehearsals before the ceremony.

The ceremony, which was only open to family of the victims, commenced with pomp and circumstance with the carrying of the flag followed by a parade of bagpipers as armed service men saluted on. The crowd then fell silent for the National Anthem.

Some friends and family in the crowd were seen clutching onto photos of their loved ones as they looked on.

Then the names of the victims were read out aloud by relatives who would stop to say anecdotes about their loves ones.

The names of the six victims of the February 26, 1993, World Trade Center bombing also will be read.

‘People say, “Why do you stand here, year after year?” Chundera Epps, a sister of Sept. 11 victim Christopher Epps, said at last year’s ceremony at the World Trade Center. ‘Because soldiers are still dying for our freedom. First responders are still dying and being ill.’

‘We can’t forget. Life won’t let us forget,’ she added.

In Shanksville, Pennsylvania the observance will begin at 9.45am at the Flight 93 Memorial Plaza.

At 10.03am, the moment Flight 93 crashed, the names of the passengers and crew members will be read and the Bells of Remembrance will be rung in their memory and a wreath will then be placed at the Wall of Names at the site.

At the Pentagon memorial, the survivors and families of the 184 victims who died in the attack were invited for a private ceremony from 9.30am to 11am, where Trump will deliver remarks.

All areas are closed to the public until the ceremony concludes.

Eighteen years after the deadliest terrorist attack on American soil, the nation is still grappling with the aftermath at ground zero, in Congress and beyond.

The attacks’ aftermath is visible from airport security checkpoints to Afghanistan.

A rocket exploded at the U.S. embassy as the anniversary began in Afghanistan, where a post-9/11 invasion has become America’s longest war.

But there has been growing awareness in recent years of the suffering of another group of people tied to the tragedy: firefighters, police and others who died or fell ill after exposure to the wreckage and the toxins unleashed in it.

While research continues into whether those illnesses are tied to 9/11 toxins, a victims compensation fund for people with potentially Sept. 11-related health problems has awarded more than $5.5 billion so far. Over 51,000 people have applied.

After years of legislative gridlock, dwindling money in the fund and fervent activism by ailing first responders and their advocates, Congress this summer made sure the fund won’t run dry . Trump, a Republican and a New Yorker who was in the city on 9/11, signed the measure in July. 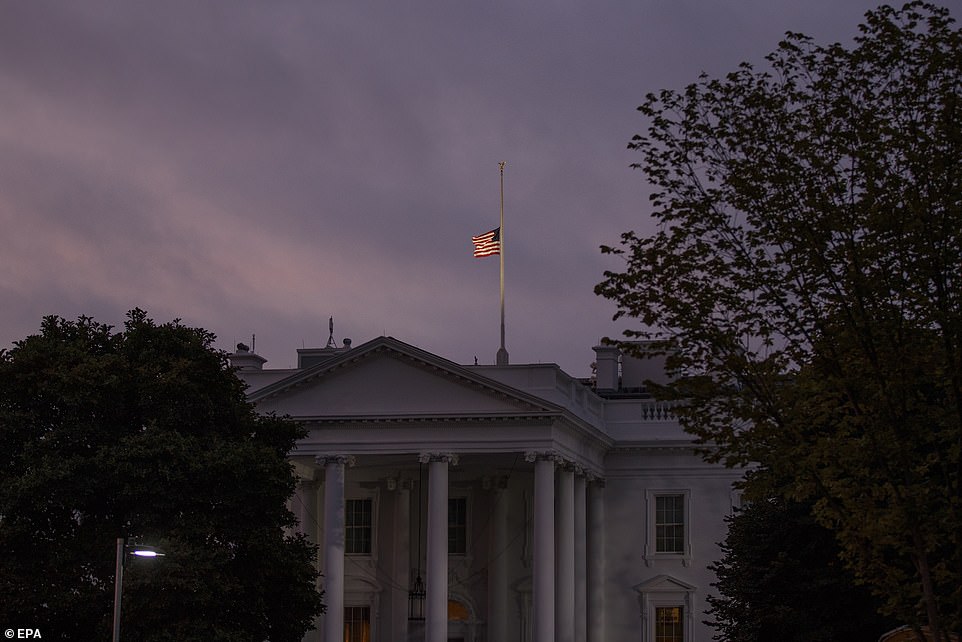 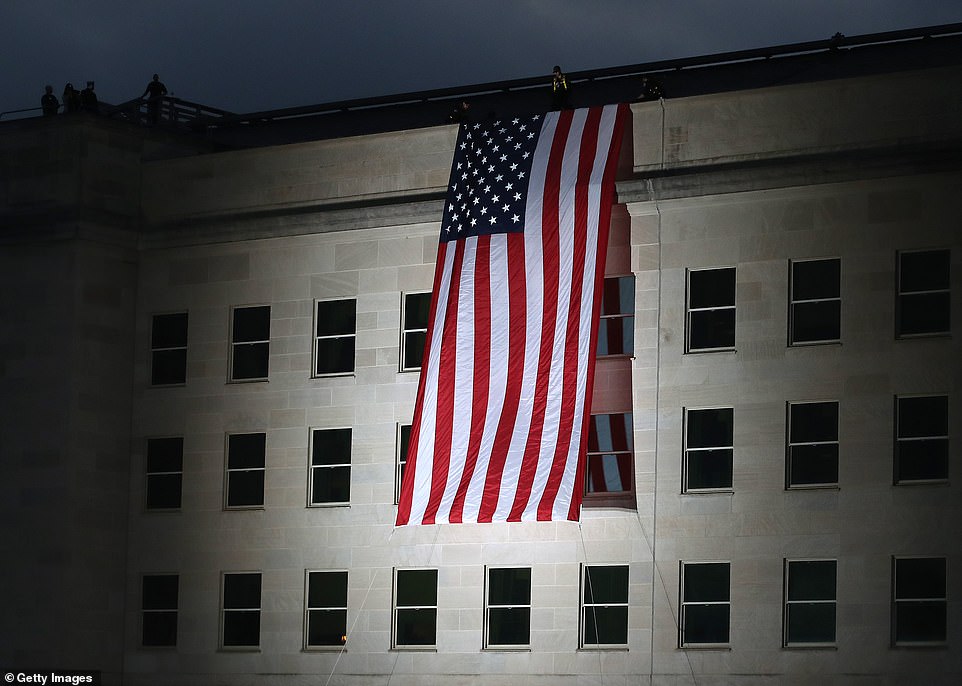 An American flag is unfurled on the side of the Pentagon to commemorate the anniversary of the 9/11 terror attacks September 11, 2019 in Arlington, Virginia 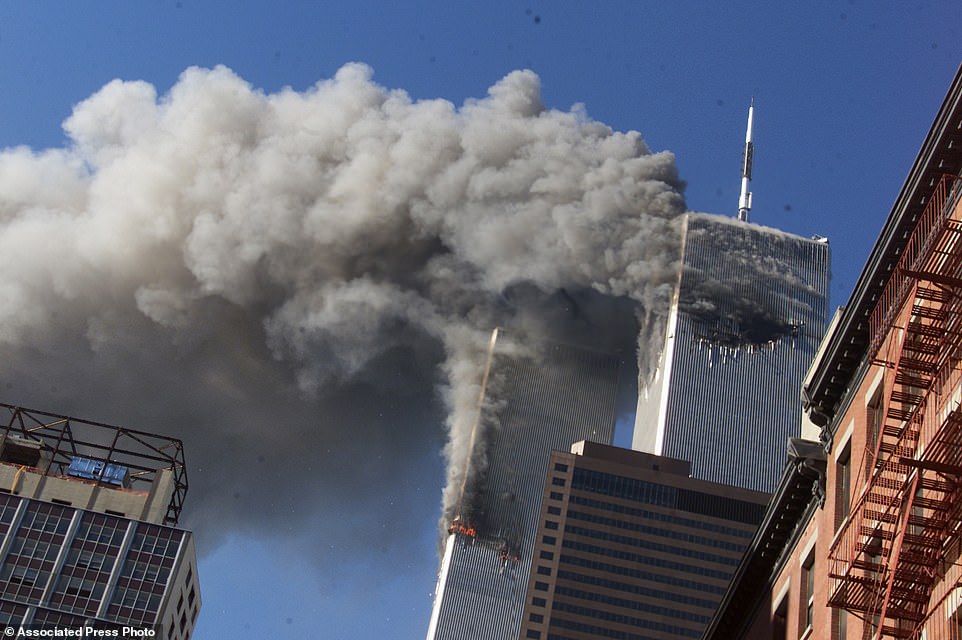 Smoke rises from the burning twin towers of the World Trade Center after hijacked planes crashed into the towers in New York City on September 11, 2001 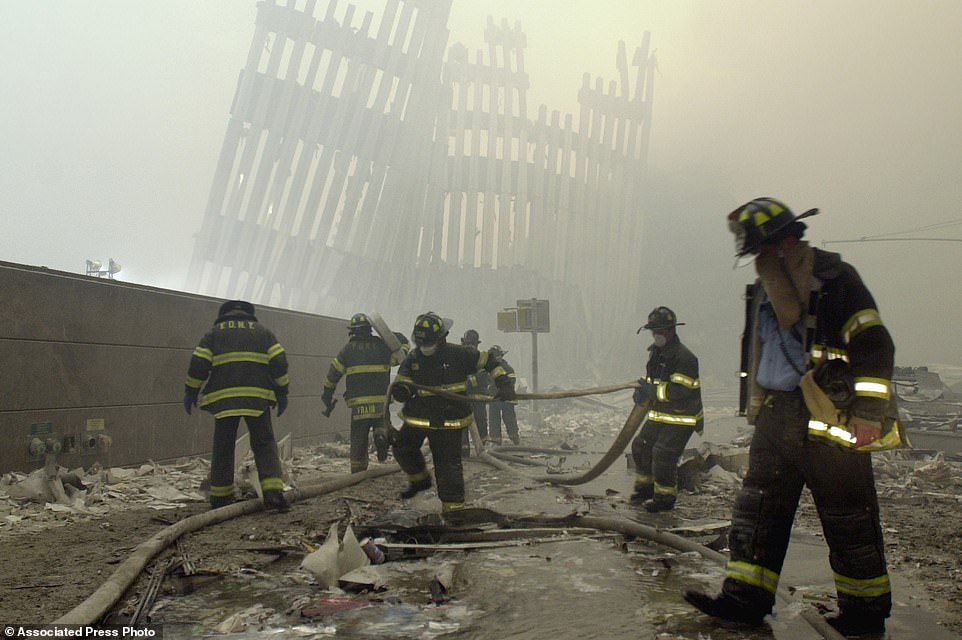 In this Sept. 11, 2001, file photo, firefighters work beneath the destroyed mullions, the vertical struts that once faced the outer walls of the World Trade Center towers following the twin tower attack

The sick gained new recognition this year at the memorial plaza at ground zero, where the new 9/11 Memorial Glade was dedicated this spring.

The tribute features six large stacks of granite inlaid with salvaged trade center steel, with a dedication ‘to those whose actions in our time of need led to their injury, sickness, and death.’ No one is named specifically.

Some 9/11 memorials elsewhere already included sickened rescue, recovery and cleanup workers, and there is a remembrance wall entirely focused on them in Nesconset, on Long Island. But those who fell ill or were injured, and their families, say having a tribute at ground zero carries special significance.

Meanwhile, the Pentagon announced Monday that its 9/11 memorial will close next week for electrical and lighting work. The project, expected to take until late May, includes repairs to lighting glitches in the shallow reflecting pools under the memorial benches.

Sept. 11 is known not only as a day for remembrance and patriotism, but also as a day of service. People around the country continue to volunteer at food banks, schools, home-building projects, park cleanups and other charitable endeavors on and near the anniversary.