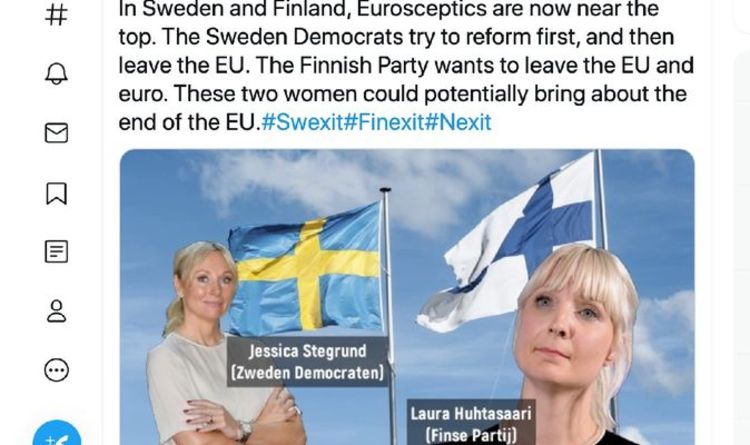 The eurosceptic campaigners hoping the Netherlands will soon follow Brexit Britain outside the bloc, have hailed two anti-EU parties in Sweden and Finland for their success.

Posting a picture of Jessica Stegrund of the Swedish Democrats and Laura Huhtassari of the Finnish Party, Nexit Denktank campaigners claimed the two politicians could soon mean big trouble for the EU.

They said: “In Sweden and Finland, Eurosceptics are now near the top. The Sweden Democrats try to reform first, and then leave the EU.

“The Finnish Party wants to leave the EU and euro.

“These two women () could potentially bring about the end of the EU.

“Sweden does not have a euro and a recent poll shows that 76 percent of Sweden is against the introduction of the euro.

“Finland does have the euro, but the Finnish Party sees opportunities to leave the euro.

“For six months, this Eurosceptic party was even first in the poll.

“The Finnish Party has now slipped slightly, to two percentage points below the first party in the Finnish poll.

“In Sweden, the Sweden Democrats are now three percentage points away from the first party.

“They come from far. Another Swedish Eurosceptic party is also rising in the poll.

“Sweden and Finland are two countries that you don’t hear much about in terms of Euroscepticism, but these polls show that there is also a large Eurosceptic movement there that is actually growing.

“Laura Huhtasaari herself thinks that the Netherlands is the next country to leave the EU.

Nexit campaigners have often lamented that richer countries in the EU are “financing” Southern Europe, facilitating the implementation of socialist labour proposals at the expense of northern EU taxpayers.

Last month, they blasted: “Spain has a four-day working week, Italy a basic income and France a retirement age of 62.

“Now the poorest country in the EU, Bulgaria, is going to increase pensions in its own country.

“In the Netherlands, the retirement age continues to rise: we finance Southern Europe.”

They continued: “Note: Spain is currently testing the four-day working week. It is not yet the case for everyone in Spain.

“The intention of the Spanish government is to introduce a four-day working week.

“Until then, we can save hundreds of billions by leaving the EU and use some of that money for our own pensions. Trade is not a problem.”