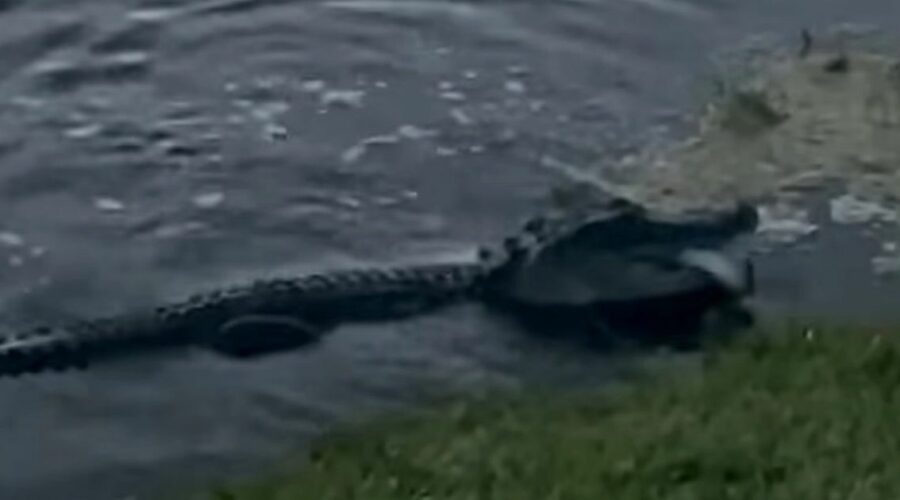 This is the petrifying moment an alligator leaps out of a lake to snatch a young kid’s fish.

Sean McMahon was filming his son Dawson, 7, as he tried to reel in a catch in their Palm Coast garden in Florida, the US.

But seconds after Dawson pulls the fish onto the land, a terrifying alligator surges forward to take it.

The beast was in such a rush, it even took the fishing pole before retreating into the murky water, MailOnline reports.

Thankfully, neither Dawson nor the alligator were injured in the incident.

Before the gator’s sudden appearance, whilst it’s still hidden in the lake’s depths, Sean can be heard telling his son: “It's alright, buddy. Keep going.”

He then says “he’s a fighter” as the fish struggles before it’s dragged onto land.

“Dawson caught a bass tonight and out of nowhere an alligator came up, ate the bass and ripped his pole into the water!”, the dad said.

The video, which was uploaded to Facebook, has sparked a big reaction online.

“Luckily his kid wasn't dragged in.”

Whilst somebody else added: “This is why you teach them to stay away from the water’s edge.

“Good boy for dropping that pole and running. That was a smaller gator but still big enough.”

A third said: “'I'm guessing dad is not from Florida and doesn't know about gators, lakes… the distance you should keep near water in Florida.

“Thank God this boy is alive.”

Stay up to date with all the latest Daily Star news by signing up to one of our newsletters here.

“Poor kid. So proud of his catch, then to lose it to a gator. Glad he is safe,” another comment read.

The state of Florida is home to a whopping 1.25 million alligators and around 1,000 American crocodiles.

Local media reports that there have been 23 deaths caused by the beasts between 1948 and 2016.