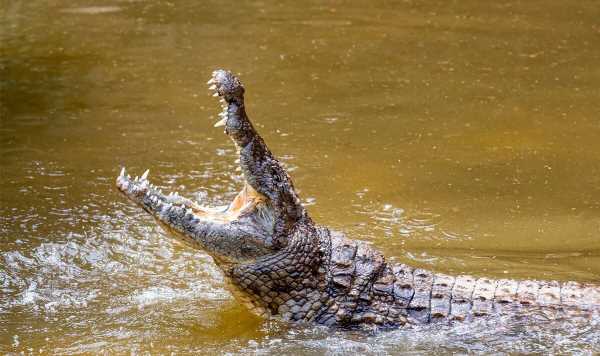 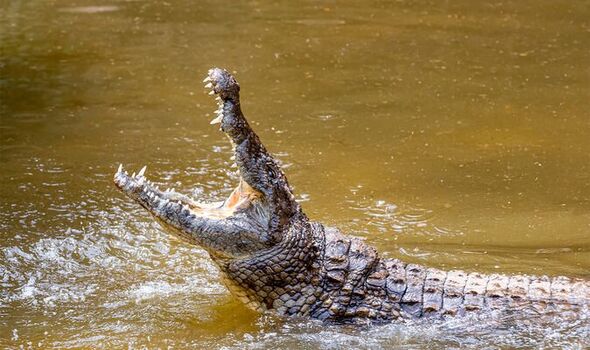 Paul Purdy and fiancée Caroline Morris were staying at Hotel Riu Vallarta in Nuevo Vallarta, on Mexico’s western coast. However, while enjoying a day at the beach, they spotted the massive beast.

Mr Purdy shared a lifeguard blew his whistle to alert people on the beach to the danger as the crocodile swam close to the shore.

He said: “It was terrifying, like a scene from the movie Jaws.

“We’d only just been in the sea ourselves a few minutes earlier.

“People were screaming and began to run out of water, there was panic.”

Video from the beach showed tourists trying to spot the croc in the waters.

Footage shows the 15-foot reptile visible just beneath the waves while police officers rode a quadbike and patrolled the sands.

Mr Purdy and Ms Morris, 57, told The Sun the animal was seen three more times after the first sighting.

The father of three added red flags were raised to warn people not to go swimming.

Speaking to the outlet, Mr Purdy insisted “they should close the beach” after the horror run-in.

Instead, he said, the couple were told it was the responsibility beach-goers to stay safe.

Mr Purdy, still on holiday, said he and his fiancée would remain on the look-out for more sightings of the dangerous creatures.

The tourists have criticising both the hotel and their travel firm Tui for not closing access to the beach sooner.

Tui said encounters with wildlife are out of their control, and added: “The hotel team followed all the correct safety measures.”

Ukraine LIVE: Do it! Lavrov goads UK to ‘force Russia to knees’

It comes after a crocodile attacked a drunk man and tried to drag him into a lagoon after he threw stones at the reptile in south-eastern Mexico.

The incident occurred on the banks of the La Encantada lagoon in the Gaviotas neighbourhood of the city of Villahermosa.

Video showed It shows the man hurling stones at the croc which responded even more aggressively.

The animal grabbed the man’s leg between its jaws and pulled him towards the water.

The director of the municipal Civil Defence, Jose Arturo Gomez Ascencio, said the man, who was not named in local reports, was inebriated and had “provoked” the reptile.

Gomez Ascencio said: “The person who was apparently attacked was throwing stones at it and was drunk.

“These animals are in the reproductive stage; they have eggs and the animal felt attacked and reacted.”