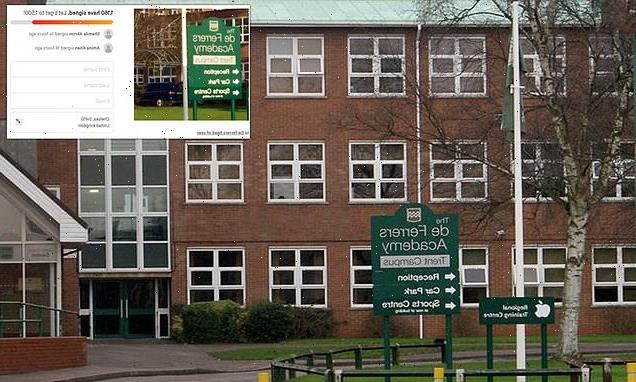 Parents and students have threatened to protest after a teacher allegedly told two pupils to wash Palestinian flags off their hands.

Some called for the member of staff to be sacked after the incident at The de Ferrers Academy in Burton, Staffordshire, last week.

An online petition – allegedly set up by a parent – has more than 1,000 signatures calling for the headmaster to dismiss the teacher. 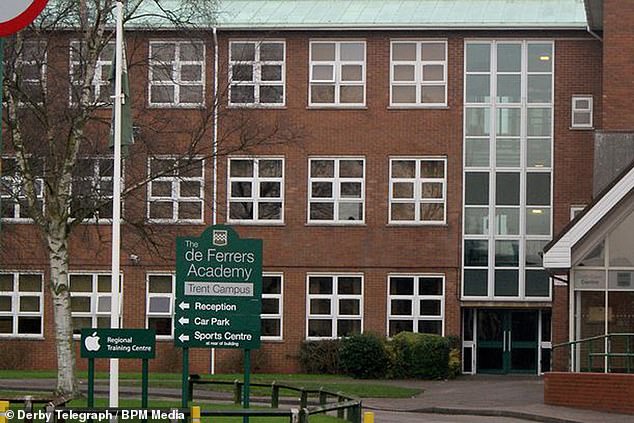 Hundreds of people called for the member of staff to be sacked after the incident at The de Ferrers Academy (pictured) in Burton, Staffordshire, last week

It says: ‘Some students decided to paint their hands with Palestinian flags. They got told off and said to the student they are supporting terrorist group.

It adds: ‘How does Palestine be terrorist they are the ones being bombed and hurt and killed.’

The de Ferrers Trust admitted tensions were running high in the community and said police had been called in to help.

Chief executive Ian McNeilly said there had been rumours a protest could be staged but he urged against it due to the busy road outside the school.

He said: ‘Obviously, tensions in some parts of the community are running high and, as part of their job, police have been supporting us and giving advice on how best to manage the situation.

‘Clearly, there’s been a lot of disquiet voiced on social media and we’ve been approached by some people who have said there’s a possibility that a protest will take place.

‘Our overriding concern is the safety and welfare of our students and we are advising that they don’t engage in any protest.

‘That’s not because we’re against the nature of the protest if it is to draw attention to what is a tragic humanitarian crisis.

‘But we don’t believe it’s a good idea for a large number of people to gather at a busy school with lots of traffic going past.

‘We absolutely understand and respect that people have the right to peaceful protest, but it becomes difficult when there are children involved around heavy traffic.

An online petition – allegedly set up by a parent – has more than 1,000 signatures calling for the headmaster to dismiss the teacher

‘We’re really disappointed, because we like to think we go out of our way 190 days a year – and beyond – to do our best for all our students, so it saddens us that people are upset.’

He added: ‘We’d like to work with those involved to heal any rifts or misunderstandings.’

Principal Kathy Hardy wrote to parents to ask them to urge pupils in ‘the strongest terms’ not to take part in any protest for their own safety.

She said: ‘Students who do not follow schools rules and expectations will be sanctioned in line with our behaviour policy.

‘We urge everyone to follow two of our values in this instance: ‘Be kind’ and ‘choose wisely’.

‘We would like to thank the police for their ongoing presence at our school, as well as their advice and support on this issue.

‘Further, we also appreciate the support we have had recently from thoughtful parents and many of our wonderful students.’

The alleged incident came after an 11-day conflict between Israel and Palestine – which saw hundreds killed.