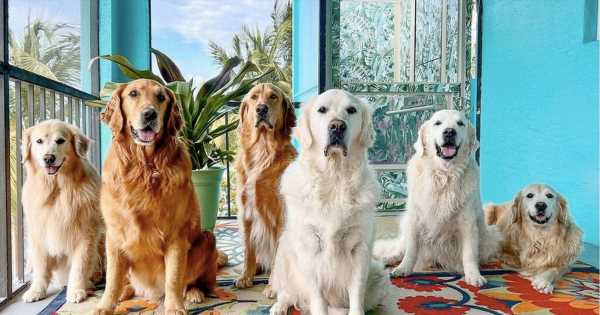 A group of adorable golden retrievers have become so popular that people online are desperate to receive messages from the talking dogs.

The Golden Ratio consists of six furry friends who are known for keeping people entertained with their murder mysteries, acrobatics and strange food choices such as tacos and waffles.

Computer scientist Jen Golbeck, 45, and attorney Ingo Burghardt, 53, from the USA, said they bring them so much joy that they wanted to share their quirky pets with the world.

Hopper, nine, Venkman, seven, Remoulade, six, Guacamole and Voodoo, both five, and Chief Brody, 12, all have peculiar traits and talents which has scored them thousands of followers online.

The pets are now an internet sensation and have become Cameo's #1 most booked animal talent over the past year.

Since March 2019, they have made 830 personalised videos, which usually involve the couple's voices being heard from behind the camera as they create Scooby Doo-like scenarios for their beloved audience.

Speaking about their reasoning for sharing their dogs online, the couple told the Daily Star: "We had been doing birthday shout outs for a while, but the volume of them got quite overwhelming.

"We wanted to offer the option for people to have our dog family celebrate with them and also make it a manageable workload, and Cameo was the perfect way to do that."

And while their inbox regularly gets flooded with birthday and graduation requests, The Golden Ratio also get asked to record pep talks and "amazing" wedding vows.

"We also got a request from a woman asking us to tell her female friend not to get back together with her ex," they said.

"It was so much fun to have a stern-looking dog with a voice over that says: 'Honey, you deserve better than him. 'You're a smart, funny, hot amazing person and he is beneath you. Don't do it.'"

The couple added: "We started putting the dogs online in the first place to share all the joy we get from them," the couple added.

"The fact that we can really concentrate that and direct it at one person, and it makes them cry or cheer or feel better, is so rewarding.

"It's really an honour that people invite us into their lives."

Cameo said The Golden Ratio are a big hit because of how "uplifting and joyous their videos are".

A spokesperson said: "Many users request Cameos from animals for a pick-me-up to make them smile and laugh and love the personalised element to the videos.

"The Golden Ratio are perfect for this, as they make funny, personalised videos of their golden retriever squad to spread happiness and love."

If you would like to receive a cheeky message from The Golden Ratio, you can purchase a video from £39 on the celebrity engagement platform here.

To see which other furry stars are on the platform head to www.cameo.com.