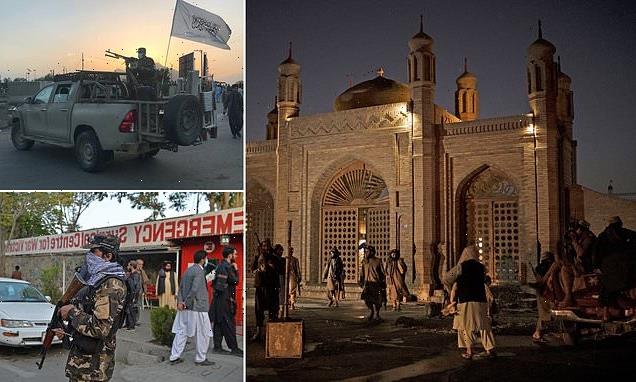 The Taliban announced on Monday that they destroyed an Islamic State cell in the Afghan capital, hours after an ISIS bomb attack on a mosque killed five people on Sunday.

ISIS-K claimed responsibility for the attack which killed at least five civilians outside Kabul’s Eidgah mosque during a memorial service for the mother of Taliban chief spokesman Zabihullah Mujahid.

Mujahid said Taliban fighters carried out a seek and destroy mission in the north of Kabul on Sunday evening and massacred a cell of ISIS-K members in retaliation.

‘As a result of the operation, which was very decisive and successful, the IS centre was completely destroyed and all the IS members in it were killed,’ Mujahid said on Twitter.

Witnesses heard blasts and gunfire in the capital at the time of the raid and told reporters the fighting between Taliban fighters and ISIS-K militants continued for hours.

ISIS-K (Islamic State Khorasan Province, also known as ISKP) is based across Afghanistan and Pakistan and was first recognised by the Islamic State in 2015.

The group has established a considerable presence in the provinces of Nangarhar and Kunar in eastern Afghanistan. 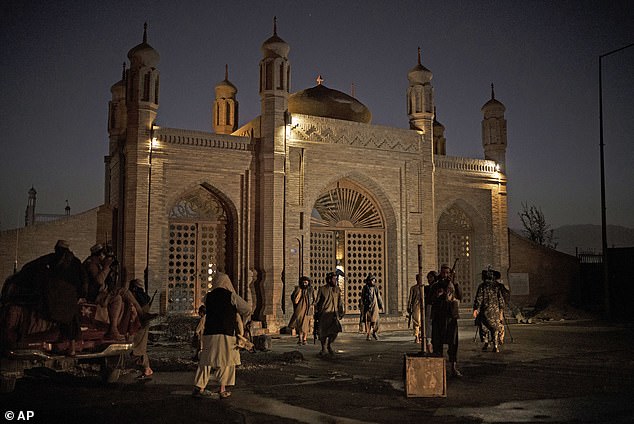 Taliban fighters have reportedly carried out an attack on ISIS-K militants in response to a bombing at the entrance of the Eidgah Mosque (pictured), which caused little damage to the mosque but killed several civilians. 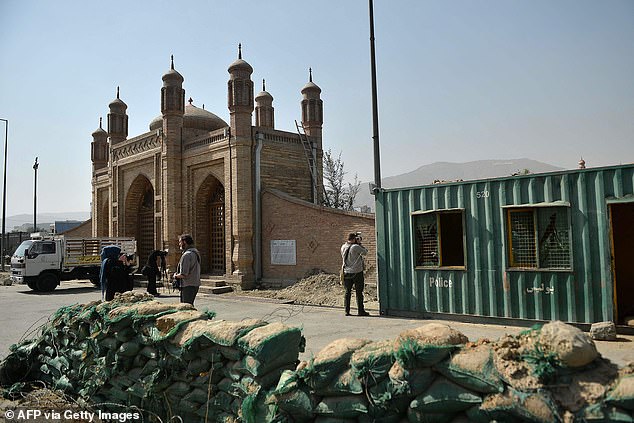 Responsibility for the attack which killed at least five civilians outside Kabul’s Eidgah mosque during a memorial service for the mother of Taliban chief spokesman Zabihullah Mujahid was claimed by ISIS-K, the Islamic State affiliate in Khorasan Province 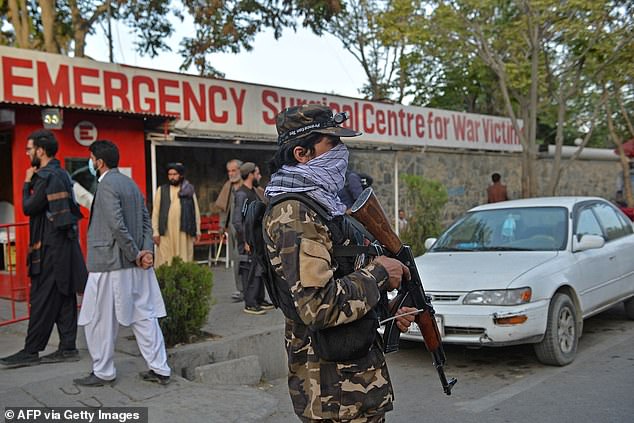 Taliban fighters were not harmed in the attack according to spokesman Bilal Karimi, who stated the casualties were civilians standing outside the mosque. Taliban guards are now stationed outside the mosque and emergency rooms

‘The fighting continued for several hours,’ he said, adding the sound of weapons kept him awake all night.

‘They said they were after Daesh (IS) fighters in the area,’ Rahman said.

‘I don’t know how many were killed or arrested but the fighting was intense.’

The Taliban announced they had also arrested three people in connection with Sunday’s bombing, in which they say no Taliban were killed.

But a witness who spoke with reporters on condition of anonymity said a group of Taliban members – including senior figures – inside the mosque grounds came under fire after the blast, taking two casualties.

He added that two Taliban units mistakenly opened fire on each other in the confusion following the explosion, but interior ministry spokesman Qari Sayed Khosti denied the claim.

Attacks against the Taliban by IS militants have increased since the Taliban swept to power in mid-August.

IS militants were also responsible for the August suicide bombing at the gates of Hamid Karzai International Airport in Kabul which killed 169 Afghans and 13 US service members.

The rise has raised the possibility of a wider conflict between the two extremist groups.

Emergency NGO, an Italian-funded hospital in Kabul, tweeted it had received four people wounded in the blast.

The area around the mosque was cordoned off by the Taliban who maintained a heavy security presence, posting armed guards around the mosque and emergency rooms accepting patients, and dispatching vehicles with machine guns to sweep the area.

IS maintains a strong presence in the eastern province of Nangarhar and considers the Taliban an enemy.

It has claimed several attacks against them, including several killings in the provincial capital of Jalalabad. 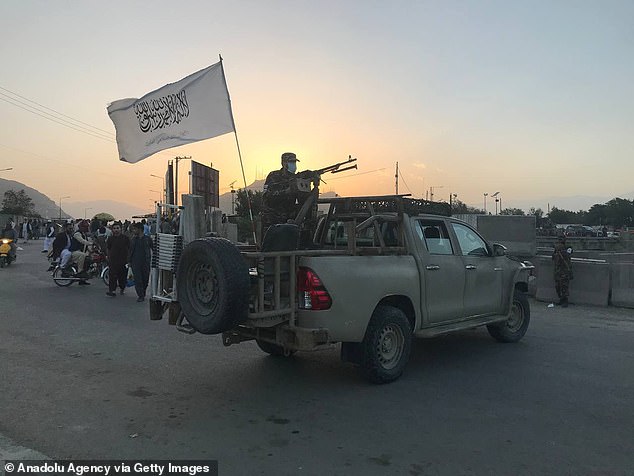 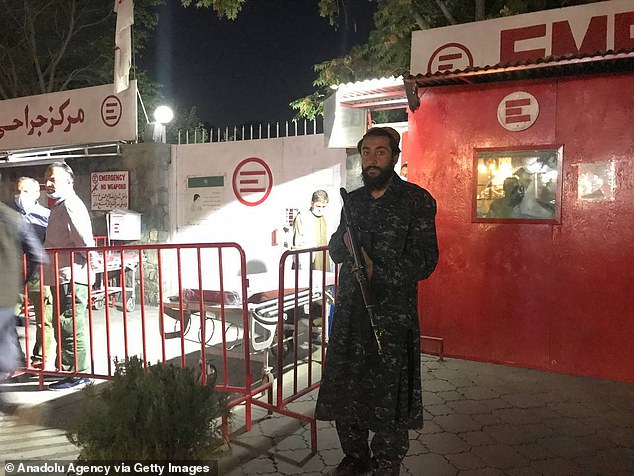 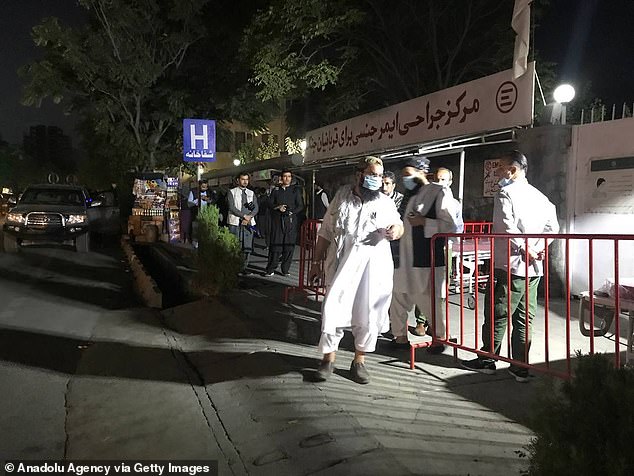 Attacks in Kabul have so far been rare, but in recent weeks IS has shown signs it is expanding its footprint beyond the east and closer toward the capital.

The attack on the mosque came on the same day that Taliban supporters and senior figures held their first mass rally near Kabul since taking power in Afghanistan.

The blast comes as a sign that the Taliban victory has not brought an end to violence after Afghanistan’s 20-year conflict. 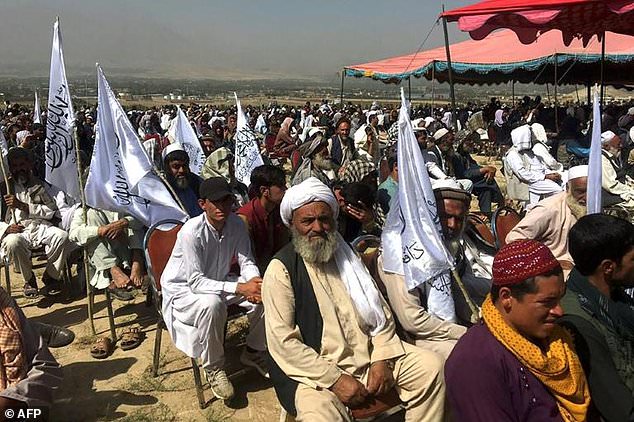 A large crowd of Taliban supporters attended a rally in a vast field to the north of Kabul on Sunday, just hours before a blast killed several civilians at a Kabul mosque

The bombing, which could be heard across the centre of the capital, came shortly after the new Taliban ‘interim government’ staged a large rally in the hilly outskirts of Kabul, attended by 1,500 men and boys.

‘This is the day we waited for,’ said Khalil Haqqani, the new minister for refugees who in 2011 was labelled a terrorist by the United States with a $5 million bounty on his head, in reference to the rally.

He is a prominent leader of the Haqqani militant network founded by his brother Jalaluddin.

‘We have achieved our goal, but it requires protection,’ he told the gathering, with his rifle leaning against the lectern, boasting that the country has a ‘bright future’ despite being shunned by international donors.