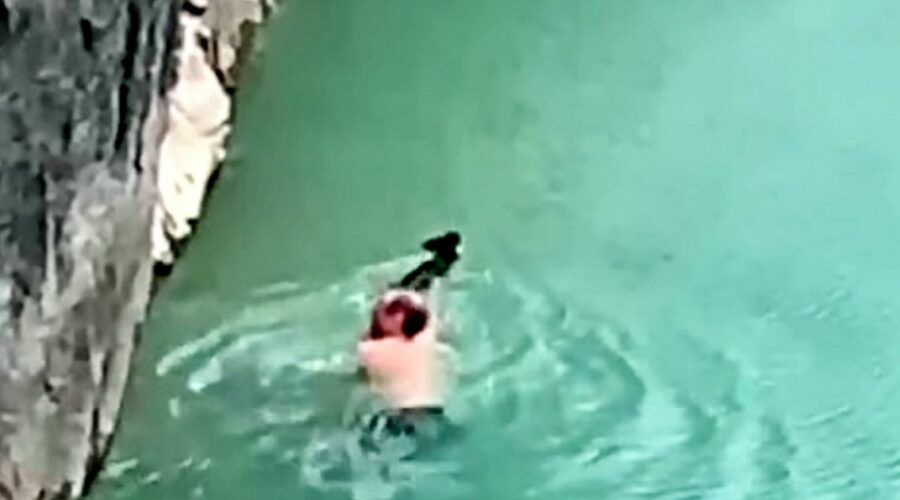 Dramatic pictures show the moment a retired cop saved a lucky dachshund from a dangerous quarry after she vanished for 26 hours.

Juan Kinley, a former DCI on the Isle of Man, heroically came to the rescue of Bebe, a two-year-old pooch, who was found on a ledge just a few feet above the water.

Bebe, along with six-month-old Lulu, had earlier sparked a major pet hunt when the two dogs became separate from their owner, Melanie Kermeen, last Sunday.

Lulu managed to make her way back home, but Bebe was only found when her owner heard her frightened yelps from the bottom of the pit, after surviving a 30 ft. fall.

While waiting for the emergency services, open swimmer Juan, 57, decided to take matters into his own hands by jumping into the freezing cold water and rescuing the terrified dog.

And with both mutts now safe and well, Melanie, 51, said she was extremely fortunate that someone with Juan's impressive skillset was ready to step in and help.

She said: "There have been tragic stories where dogs get lost, so it was just a harrowing 26 hours.

"But the way it ended was quite spectacular, and her fall down off the ledge was quite miraculous.

"We're just really, really lucky that we had someone like Juan with us, with his capabilities, because she was looking like she was going to jump in the more distressed she was getting."

"I was shouting to her, and I actually heard her yelp, so I knew she was alive, which by then was 26 hours from her being away.

"She must have fallen 30 ft. down onto this ledge, just four or five ft. above the water.

"This water is very deep – 3.5 metres deep. She was amazingly lucky to have fallen down there."

Melanie called the emergency services for help and was waiting for a fire safety officer to arrive.

But with Bebe becoming ever more distressed, five-time Iron Man veteran Juan decided to embark on the daring rescue mission himself by swimming over to save her.

Melanie said: "He swam about 30 metres to Bebe and checked if she was alright. She was delighted to see him.

"She didn't seem to be hurt, so he picked her up and made the swim back, which was pretty tough as by that time it was pretty cold.

"She was trying to help with her little doggy paddle, which was just scratching his face and eyes and chest."

Now back home safe and sound, Melanie thanked the local community for their help and said she wouldn't be letting the two mischievous pooches off their leads again.