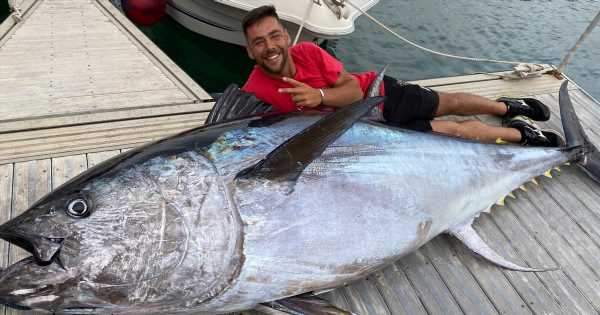 Three British anglers wrestled a bluefin tuna that weighed an incredible 328kg (51st) from the water after an epic struggle.

Kyle Cavilla, Gareth Valarino and Shawn Desoisa were dwarfed by the 9.4ft whopper as they posed for snaps next to the colossal catch on July 9.

The beast, which would make for a sizeable round of sandwiches, is so gigantic that the the lads couldn't all fit on their 15ft boat.

It weighs more than Britain's fattest man Jason Holton, who tipped the scales at 50st (317kg) in October.

So the pals, who've been fishing together for the past decade, dragged it for two miles until they reached the marina in Gibraltar, Spain.

They say it's this year's record catch and the second largest ever fished in the waters off Gibraltar.

Electrician Kyle, 28, said: "It was really a fight to remember, it took all three guys to bring it to the boat.

"At around 35kg of drag the reel had to be cooled down with water due to the power and strength of this monster.

"We knew straight from the start it was going to be a big fish.

"It wouldn't fit in the boat!

"We had to drag it all the way back to the marina taking into account we were fishing on a 4.8 meter [9.4ft] boat."

The anglers, all Brits living in Gibraltar, sold a few chunks of fish but saved the rest to enjoy with family and friends.

In 2019, a Japanese tycoon dubbed the "tuna king" splashed £2.5m on a giant tuna, making it the most expensive ever sold.

Kiyoshi Kimura snapped up the 278kg bluefin tuna – which weighs less than Kyle, Gareth and Shawn's catch – at an auction in Tokyo.

The world-record bluefin, weighing an incredible 1,496lb, was caught by Ken Fraser off Nova Scotia in 1979.