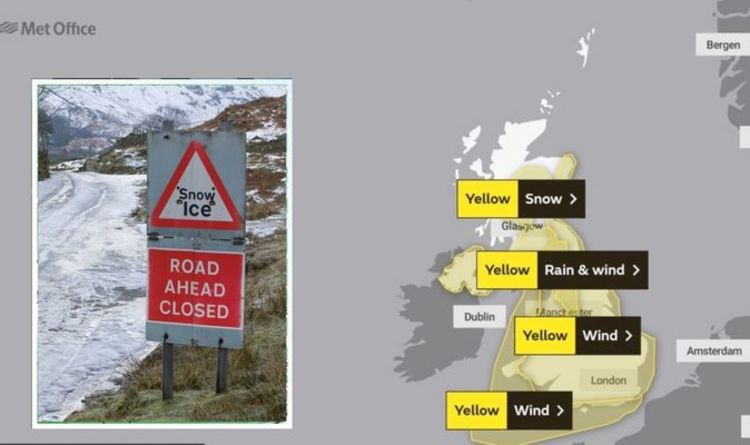 Storm Arwen caused widespread damage across the UK leaving thousands without power. But many Brits hoping for a break from such severe weather will be disappointed as the second named storm of the season, Storm Barra will make landfall on December 7.

The storm will move in from the Atlantic today, bringing heavy rain and strong gusts across large parts of the UK.

The Environment Agency has issued 35 flood alerts and three flood warnings for England’s south coast, at the time of writing.

The West of Ireland will be the worst hit by the storm, according to Met Office forecasters.

But the extreme effects of the storm will also be felt across much of England, Wales and Northern Ireland.

The Met Office has issued a swathe of yellow weather warnings for December 7, for snow, rain and wind, which cover most of the UK – with only a small part of northern Scotland safe from the storm’s wrath.

The effects will ease a little on December 8, when there are only two weather warnings in place.

But a yellow alert for wind continues on December 8 for South Western England and the western tip of Wales while a second yellow warning covers the whole of Northern Ireland for rain and wind.

Will Storm Barra be as bad as Storm Arwen?

In terms of wind speeds, Storm Barra is expected to bring gusts of up to 60 to 70mph in exposed coastal locations.

In the early hours of December 7, the Isles of Scilly had already reported a gust of 67mph.

This may be severe but Storm Arwen’s gusts were considerably stronger, as some areas experienced winds of almost 100mph.

Deputy Chief Meteorologist Brent Walker said: “Locally this could reach 10cm, particularly in parts of the Southern Uplands and Highlands.”

However, Storm Arwen brought far heavier snowfalls that spread beyond Scotland covering much of Northern England and the Midlands.

At least 60 people were trapped in the Tan Hill Inn in the Yorkshire Dales for three days, as high snowfalls trapped them in the pub.

Overall Storm Barra is forecast to be much less severe than Storm Arwen.

Conditions were so extreme during Storm Arwen that the Met Office issued rare red weather warnings.

Such warnings indicate “it is very likely that there will be a risk to life.”

Three people were killed by falling trees during this Storm Arwen which has been the most severe storm of the year so far.

07/12/2021 World News Comments Off on Storm Barra vs Storm Arwen: Which was worse?
Markets