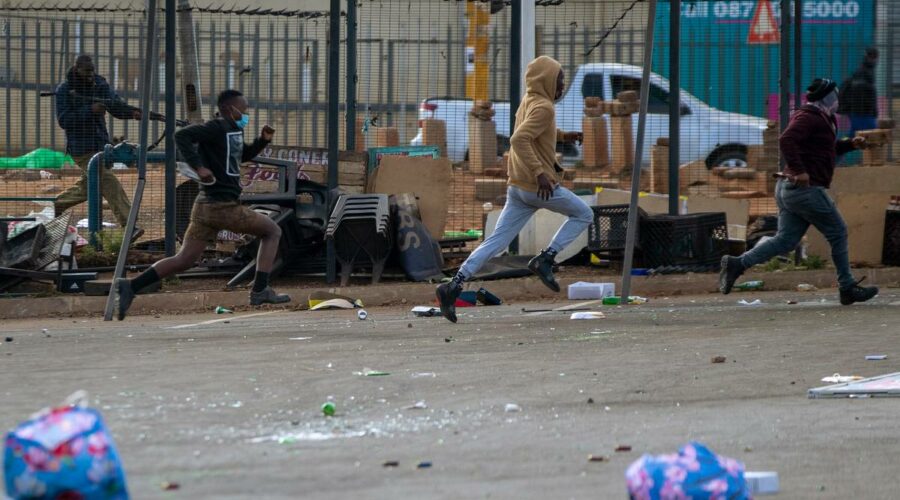 At a roadblock on the outskirts of Howick, a town in South Africa’s KwaZulu-​Natal Province, a young black man was receiving medical attention for a bullet-wound in his hand.

He was noticeable for being the only black man among a group of about a dozen heavily armed white men who are part of an impromptu militia who have stepped into the vacuum left by a police force hopelessly overstretched by the nation’s worst outburst of street violence since the fall of Apartheid.

The sight on Tuesday morning of an all-white force of gunmen stopping vehicles carrying mostly black passengers brings back uncomfortable memories of the past. But residents here feel it is their last line of defence.

“These guys are doing an amazing job,” said Pierre Gildenhuys, as he unslung his assault rifle at one of the roadblocks where drivers were being stopped. “Without these defence lines that they set up yesterday the situation could have been infinitely worse.”

Gildenhuys works for D&K – one of Africa’s biggest private security firms. He and nine other heavily armed men were driven in from Gauteng province on Monday to protect the big Dunlop factory that overlooks Howick Falls, the town’s spectacular waterfall.

“A private security company put a call out on Tuesday evening asking for people who were prepared to stand guard or patrol,” said one Howick resident, who asked to remain anonymous, standing by a road block just a stone’s throw from a row of gutted and burned out shops.

“I was really impressed that about 300 people turned up at a meeting point outside one of the few supermarkets that had escaped the mob. We were drilled and weapons and ammunition were checked then we were allotted tasks either on roadblocks or on patrol in the town and surrounding area.”

Howick is a sleepy town of around 21,600 residents, famous mainly for being a retirement destination for the white middle classes. The past few days of mayhem have left many here stunned.

In several hours of rioting on Monday, the big Pick n Pay supermarket which stands next to the taxi-rank in the centre of town was looted and gutted.

Most of the small shops – cellphone data-suppliers and general stores, many Asian-owned – were ransacked then burned down. The shops in a nearby shopping centre were also vandalised.

A large furniture store was almost emptied, although much of the loot that proved too heavy to carry was abandoned even before it could be carried across the bridge out of town.

A group of armed locals did manage to defend a nearby gun and ammunition shop, and may well have saved lives by doing so.

But the town’s police force were completely overwhelmed. By Monday evening they had exhausted their supply of rubber bullets and were running low on live rounds, relying on donations from local civilians for ammunition.

“The police were totally outnumbered and could do nothing whatsoever,” said Redwan Hossain, a shop keeper who moved to South Africa from Bangladesh three years ago. “We had to defend the area ourselves.”

Quietly spoken and earnest, Redwan was standing outside the smouldering wreckage of his cousin’s shop and still holding the red baseball bat that was his only weapon during Monday’s violence.

Among the scattered debris and broken glass were a couple of 9mm shells. “A couple of us had guns,” Redwan confirmed. “Without that we could never have held them back.”

The shopkeepers’ defence was only partially successful. Redwan’s own store was saved, although his cousin lost everything. But although Tuesday was mostly quiet, they were not taking any chances.

Late in the afternoon he and his friends – a mixed group of Bangladeshi and Indian Muslims and some neighbouring Zulu shop-owners – were stood around a fire in the highland chill, clutching clubs and machetes. A rumour was circulating that looters and rioters are going to be bussed into town this evening, and they wanted to be ready.

The men here believe that the carnage is politically orchestrated, organised by supporters of ex-president Jacob Zuma, furious at his imprisonment for refusing to testify at a public enquiry into alleged government corruption during his presidency.

It may have started that way. President Cyril Ramaphosa has accused unnamed people of trying to stoke tension along “ethnic lines”, in a reference to suspicions that Zuma’s supporters have tried to stir up unrest amongst the Zulu population.

Zuma’s foundation said on Tuesday there would be no peace in South Africa until the former president was released from jail. “Peace and stability in South Africa is directly linked to the release of President Zuma with immediate effect,” it said in a tweet.

But as the president also acknowledged in a national address on Monday night, the political grievance has largely been overtaken by an outpouring of anger at “unsustainable” levels of poverty and inequality 27 years after the end of Apartheid.

Those lingering divisions are as visible in Howick as anywhere else.

While many of the smaller shops are Asian-owned, the town is predominantly white and well off in the centre. The black population mostly live in poorer suburbs and townships on the outskirts.

Cobbled together on the sloping patch of scrub between the Dunlop factory and the picturesque falls there is an informal settlement – a squatter slum of rickety shacks. The ramshackle hamlet is a constant reminder of the level of poverty and degradation that many people live in here.

The banks of the river are still littered with debris that illustrate not only the desperation but also the mindlessness of Tuesday’s looting binge.

Somebody took the time to carry away the empty tray for a cash register and a ruled accounts book for a small-time cellphone airtime seller. Across the road a second-hand store and even a funeral parlour have been looted.

Watching overloaded looters trooping up the hill towards the slum on Monday afternoon, it was not difficult to sympathise with them. The poverty that transforms a couple of cheap blankets into a coveted find, or creates a treasure out of a sheet of looted aluminium which could keep the rain off a baby’s head, is all too visible.

Neither police nor army reinforcements had arrived by Monday night, and the local gunmen were setting up on the main bridge into town, determined to hold the defence position.

“Things could get very real indeed over the next few weeks,” said Gildenhuys, as his phone pinged with requests for reinforcements from across Kwa Zulu-Natal.

“We really don’t know how bad it’s going to get even this evening, but my company has sent out every trained man we can possibly get our hands on.”

South Africa is facing its gravest domestic crisis since the end of Apartheid. That is the only possible assessment of the tide of chaos that engulfed the country over the past week.

In Kwa Zulu-Natal, anger among the Zulu population and gangs of white vigilantes arming themselves for self-defence have brought back memories of the bloody racial violence that preceded the first democratic election in 1994.

Johannesburg is almost completely shut down, with shops closed or empty and residents struggling to procure basics like cooking and heating gas in the middle of a bitterly cold winter.

President Cyril Ramaphosa has warned chaos will lead to food shortages, a disruption to vaccine rollout and a surge in Covid deaths if it is not brought under control.

Veteran South African journalists who reported on the end of Apartheid have described a horrible feeling of deja-vu.

How on earth, they are asking, did the nation of Nelson Mandela come to this?

There is a parallel question. How did the African National Congress, Africa’s oldest political party, which produced Africa’s first lawyers, Mandela himself, and the world’s first truth commission, end up so mired in allegations of corruption and incompetence?

Many will blame Zuma himself.

The massive corruption alleged to have taken place under his government between 2009 and 2018 is widely thought to have eroded trust in government and contributed to entrenching the inequality, unemployment and low living standards that Ramaphosa has said underpins the current unrest.

But others trace the rot back even further. In 1998 and 1999, just before he left office, Mandela’s government negotiated a series of enormous arms purchases that South African and European investigators believe were marred by massive bribery.

Zuma, who was deputy president of the ANC at the time, is to go on trial for allegedly accepting bribes from the French defence firm Thales during those negotiations on Monday.

But he is far from the only senior ANC man to have been implicated in the affair.

Still others point to the legacy of Apartheid itself.

“Apartheid and defiance of the state bred a culture of impunity. We came from an autocratic system,” said William Gumede, a professor at the School of Governance at the University of Witwatersrand.

“But under the Jacob Zuma presidency, we have had a culture of impunity. So the looting we saw – looting at the top, trillions of Rands stolen by politicians and Jacob Zuma’s allies – that was top-level looting and no one was held accountable, and now we are looting at a grass-roots level.”

Ramaphosa certainly grasps the gravity of the situation. In an address to the nation on Monday he acknowledged that the violence “shows in to stark relief what we already know – that levels of unemployment, poverty and inequality in our society is unsustainable”.

That frank acknowledgement of the gap between that dream and today’s reality is the first step to fixing it.

If he fails, the consequences will be dire for South Africa and the swathe of neighbouring countries plugged into its huge economy.