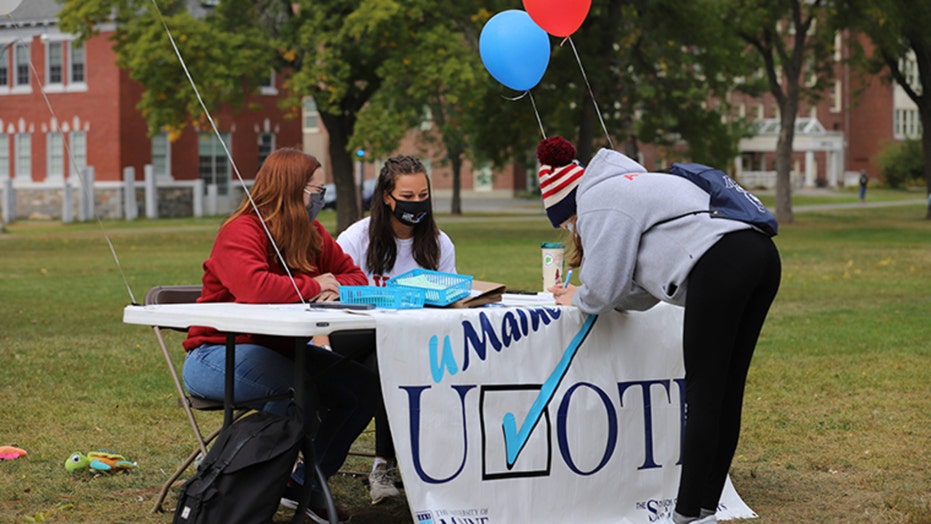 Voter outreach on college campuses is a big challenge for Democrats amid the pandemic – in part because a lot of students aren’t there.

A University of Kansas student has been placed on probation by the college's Kappa Alpha Theta sorority for showing "unbecoming" values through her conservative social media posts and retweets.

According to documents provided to Fox News by sophomore Katherine Lauer, she was sanctioned by her sorority for "argumentative communication (verbal or otherwise) with members as a result of your social media posts that disregards different opinions."

As part of the terms of her probation outlined in a letter on Monday, Lauer was asked to take a "social media posting holiday" for a week to do a "personal reflection and cleanse" and to watch a video selected by the sorority's Diversity, Equity and Inclusion Committee. She was also instructed to have an "open dialogue" with Kappa Alpha Theta chief operating officer Allie Dew to get a "broader education of America today."

Lauer was further told to monitor her individual social media posts between Oct. 19 and 26 to "assess their alignment with the Kappa Alpha Theta online social media contract" and to ask herself before posting if what she puts online would help or hurt her "personal brand," Kappa Theta Alpha or women of another race.

Finally, she was told to focus on "positive, collegial conversations" when approached by other sorority members about her posts.

The University of Kansas and the Kappa Alpha Theta sorority did not immediately return Fox News' request for comment.

At issue is a social media post shared by Lauer from conservative pundit Candace Owens, who is African American, that claimed: "Black Lives Matter is an organization of white men, using the faces of dead Black people to raise millions of dollars toward electing White Democrats into positions of power."

"It is the most flagrantly racist organization in America," Owens added.

Lauer also included the caption from Owens above the original post which reads, "Billions raised and not a single dollar given to Black schools, Black scholarships, Black neighborhoods or Black initiatives. Not a single office location or a company organization chart to speak of." 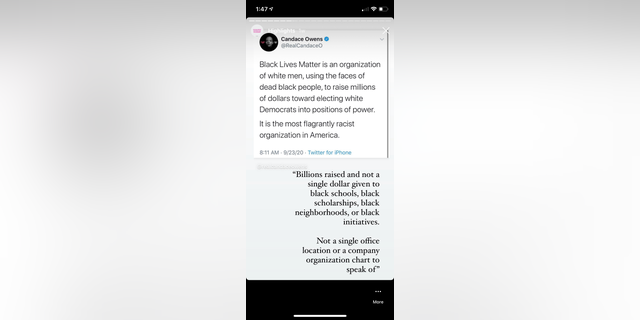 A review of other social media posts by Lauer focused on pro-life stances and comments made by former Vice President Joe Biden in which he incorrectly claimed that 200 million people died from the coronavirus pandemic, among other topics.

Lauer told Fox News that she believes she's been unfairly targeted by other members of her sorority. She shared a series of text messages in which members accused her posts of being "hurtful" and told her that as a white woman it was "not her place to state who is racist and who is not," referring to President Trump.

She also shared an email exchange from the sorority notifying Lauer of her placement on discretionary probation. When Lauer asked what she did wrong, she received a reply stating the decision is "not claiming you have broken a bylaw or rule, but that you have had conduct unbecoming of a member of Theta as the values you have been making public through social media and text communications went against Theta's values and disrespected women of our chapter."

Lauer told FOX News that she attempted to appeal the probation in a meeting with the sorority's advisory board on Oct. 18 but that the members would not overturn the decision.

In a recording of the Oct. 18 meeting shared with FOX News, Lauer was questioned about the Owens post.

"My reasoning for this post was to shed a little bit of light on the transparency of the organization," Lauer said in the meeting. "Because I've been reading a lot of stories about people who teach in Black communities, who live in Black communities, and they are very outraged that the Black Lives Matter money isn't going to those communities and all their funds are being controlled by Act Blue and its really hard to track where those funds are going."

She added that while she supports the idea behind Black Lives Matter, she doesn't agree with where the funds raised by the organization are going.

Members of the committee also pressed her to admit she benefitted from white privilege and informed her of anonymous forms filled out by other members who described in-person conversations they had with Lauer which made the committee feel "alarmed."

When asked if other sorority members had faced similar consequences for their political views, Lauer said that she has no knowledge of any other member who faced similar repercussions despite "aggressive" posts she claims others have made against President Trump and his policies.

"At this point, you know, I still don't know exactly what I've done and to me, I feel like they're really trying to suppress me and silence me," Lauer said. "I've had actually a lot of Thetas reach out to me and thank me for my post and say that they really appreciated my bravery because a lot of the conservative friends that I have do not feel comfortable speaking their opinion. It's almost like, you know, where it's just the environment that everyone feels suppressed."

Lauer is set to be "reevaluated" during a meeting on Oct. 26.

"If at this meeting it is determined that you have successfully met all terms of probation and the advisory board feels that you are ready to become a member or new member in good standing, this extended discretionary probation status will be lifted," the letter adds.