Solicitor caught in undercover TV sting offering to arrange sham marriage for £13,000 so client could flout immigration rules and stay in the UK is struck off

A solicitor caught in an undercover TV sting offering to arrange a sham marriage so a prospective client could flout immigration rules has been struck off.

Zulfiqar Ali told a reporter posing as a Pakistani immigrant that he would have to fork out up to £13,000 to pay off his new bride and stay in the UK.

He declared a fake marriage was a ‘quick and easy way’ of remaining in the country and even revealed he could help trick Home Office workers into thinking the marriage was real.

Mr Ali – who is on benefits after his law firm was forced to shut – has now been struck off following a hearing by the Solicitors Disciplinary Tribunal.

He was snared by an undercover reporter working for an ITV documentary who visited his London-based company ZA Solicitors Ltd complaining that his student visa was due to expire in six months. 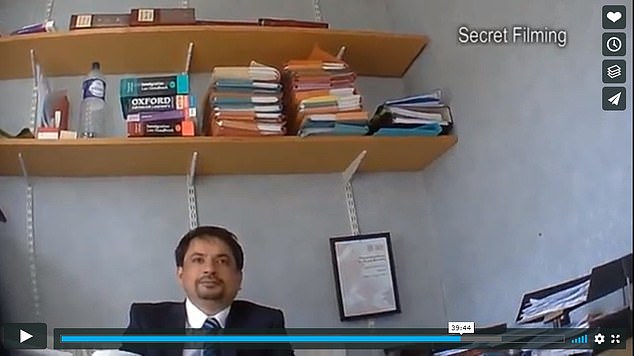 The reporter said his parents wanted him to stay in the UK after a year and half in the country but he didn’t ‘really have any options’ and thought it would be difficult renewing the student visa.

After hearing the bogus client didn’t have a girlfriend, Mr Ali said his ‘options’ were to get a degree or claim asylum before ‘moving straight onto’ talking about a sham marriage.

In a recording, Mr Ali said: ‘Whichever visa in your situation, the most reasonable way would be for to get married in a proper way.

‘There will be no hassle, No doubt, you can find a girl – whether the girl wants to go to Pakistan or not. That is a relatively, a quick and easy way.’

He was also heard saying: ‘I will tell you legal way in which you will seriously keep the marriage.’

The ‘dishonest’ solicitor boasted he knew questions the Home Office would ask and said he was one of ‘five or six’ solicitors who could help with fixing a fake marriage.

Mr Ali said: ‘You will be helped in your documentations, application forms and in interview if you need to be interviewed. We will arrange all these documents. We will help you with everything.

He added: ‘We need to do it together we can do that. It’s just simply getting all the paperwork, putting bills together, making name together making photographs. 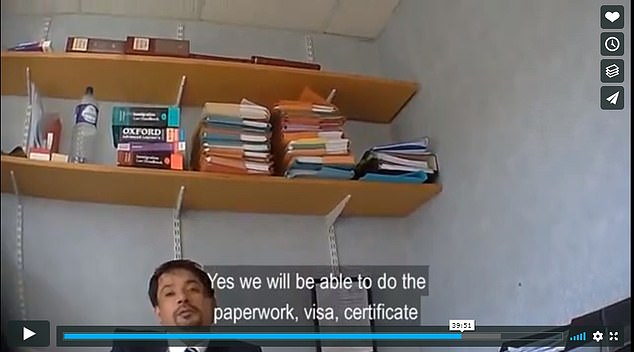 ‘Where you live you have to understand where you live, you know the area, your house, I’m in this room somebody say what else is in the room you need to be able to explain this situation what is in the room, practice, with all these things.

‘They don’t ask the question something out the blue, something people don’t know what they’re talking about so it is definitely on small facts, where do you live, what kind of house it is, how many bedrooms, what colour the bath what colour is the bed sheet, if there is any extra furniture there.’

Mr Ali said up to £13,000 was needed so he could sort paperwork, the visa and marriage certificate, as well as pay the woman.

While the couple would ‘technically’ have to live together, they could divorce after three years and retain residency.

But they could get out of the marriage sooner if the man ‘wished her to die after one year’ by producing a death certificate, the solicitor claimed.

Mr Ali said: ‘I’ve been dealing with this, doing these kind of applications every day.’

The tribunal heard Mr Ali is now on universal credit after his company went into voluntary insolvency and he is also three months behind in his rent.

He denied the allegations, claiming he advised on the legal options in ‘good faith’ and answered ‘hypothetical’ questions during two meetings with the undercover reporter in 2015.

Parts of the meetings were broadcast in 2015 as part of ITV documentary Exposure: The Sham Marriage Racket.

But a tribunal rejected his claims, banning him from working again and ordering him to pay £26,500 costs.

A report from the tribunal read: ‘The tribunal had found that Mr Ali had advised on entering into a non genuine marriage, and offered to prepare the relevant paperwork, with a view to circumventing the UK immigration system.

‘Mr Ali’s conduct represented a serious departure from the probity required of all solicitors. Such conduct would inevitably have a significant harmful effect on the reputation of the profession.’