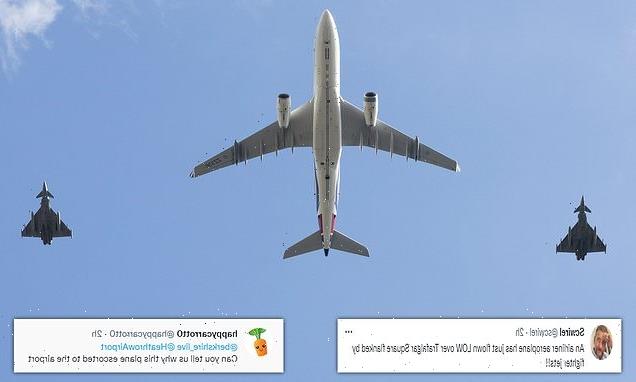 A jet which flew low over Trafalgar Square while being flanked by two RAF Typhoons sparked a panic on social media today.

The Royal Air Force earlier said the flypast had been planned to welcome the Prime Minister of Japan, Fumio Kishida, to the UK.

But the sight of the RAF Voyager being flanked by two RAF Typhoons sparked concern among some on social media, with users speculating whether a passenger jet was being escorted into Heathrow.

People on social media posted pictures and video showing the large jet being flanked by two smaller RAF Typhoons as it flew over Reading and the capital.

Some speculated that it was a British Airways plane but it was in fact the RAF Voyager with a Union Jack emblazoned on it. The aircraft, Airbus A321, is used by the Prime Minister, cabinet ministers or members of the royal family when making short trips. 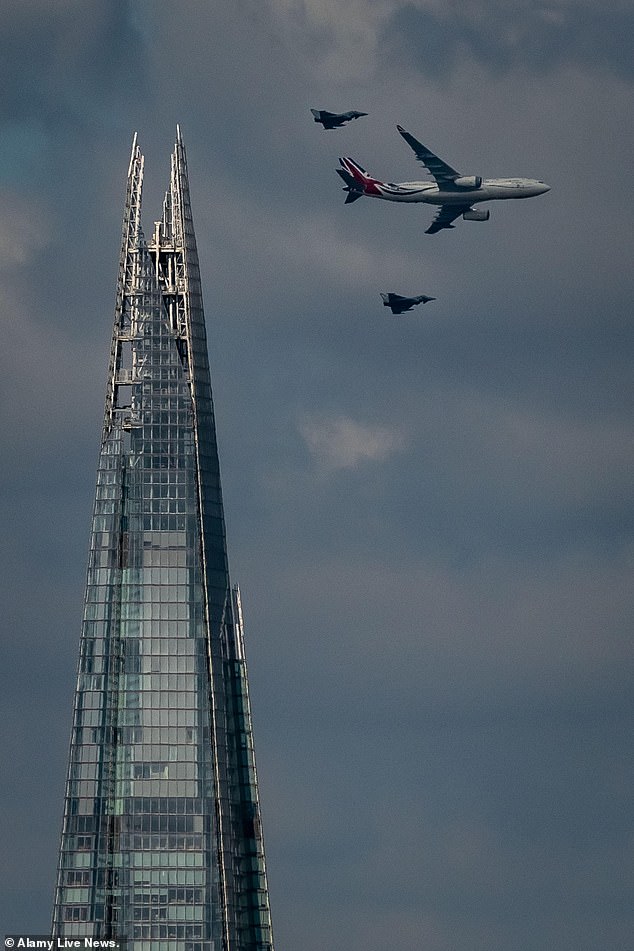 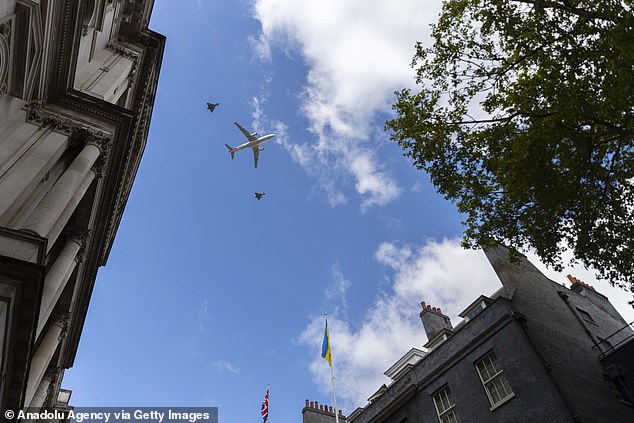 The Royal Air Force earlier said the flypast had been planned to welcome the Prime Minister of Japan, Fumio Kishida, to the UK

On Thursday morning, the RAF tweeted: ‘You may see a RAF Voyager and two RAF Typhoons flying over central London this morning.

‘This is a pre-planned flypast to welcome the Prime Minister of Japan to the UK.’

Before holding talks in No 10 on Thursday, Mr Kishida and Boris Johnson stood on a dais as they witnessed the Voyager and two Typhoon fighter jets soar over St James’ Park and the parade ground.

Afterwards, Mr Johnson said the UK and Japan had agreed a defence deal that will allow their national forces to ‘work more closely together’.

The Prime Minister, speaking in Downing Street alongside his Japanese counterpart, said he was ‘so glad’ the two nations agreed a reciprocal access agreement (RAA) for armed services.

He said allies in Europe and east Asia have to be unified in the face of ‘autocratic, coercive powers’.

Mr Kishida’s first official visit at the invitation of the Government was marked with a guard of honour and an RAF flypast over Horse Guards Parade in central London.

Mr Kishida was then invited – in Japanese by the captain of the Nijmegen Company, Grenadier Guards – to inspect the troops.

After the spectacle, Mr Johnson and Mr Kishida headed to Downing Street where the British leader announced that a military accord has been struck.

The Prime Minister said the world has observed the ‘strong stance’ the Japanese government has taken ‘against the Russian aggression in Ukraine’. 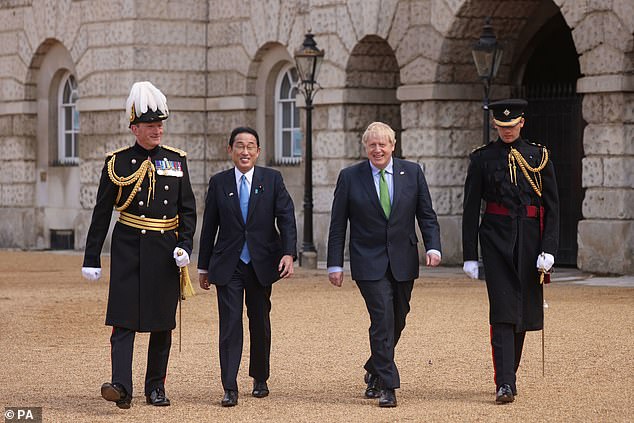 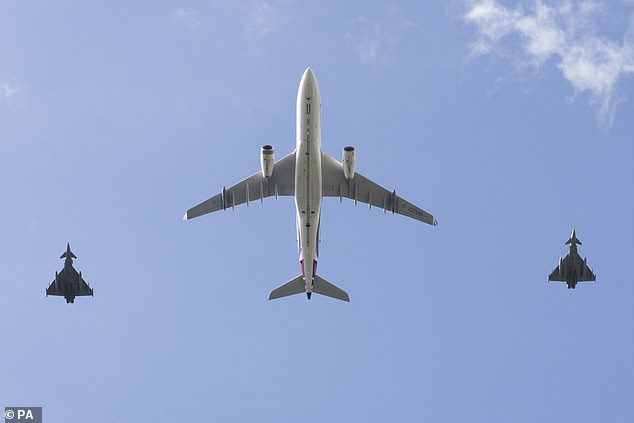 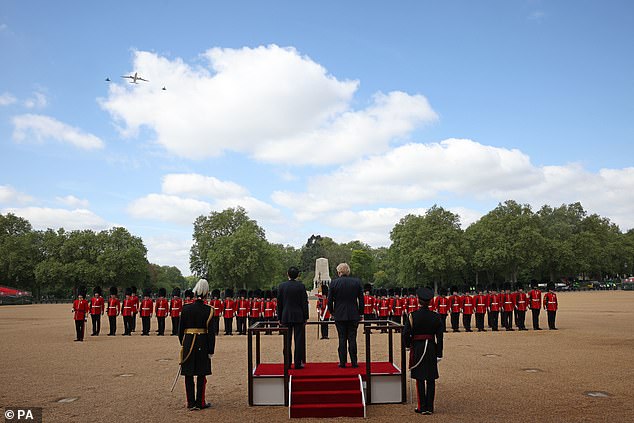 He added: ‘We in the UK recognise that our security in Europe is indivisible from the security, our collective security, in the Asia-Pacific, in the Indo-Pacific region.

‘And there is direct read across from the actions of autocratic, coercive powers in Europe, to what may happen in east Asia.

‘And that’s why we want to work more closely together.

‘And today I’m so glad that we’ve agreed the reciprocal access agreement between our armed services.’

No 10 said the ‘landmark’ RAA will allow the two countries’ forces to deploy together for training, joint exercises and disaster relief.

Downing Street said the agreement will boost the UK’s commitment to the Indo-Pacific and further safeguard global peace and security, and build on the already close collaboration on defence and security technology between both nations.

Talks began on deepening the UK-Japan defence relationship in September, following on from the Government’s defence and foreign policy integrated review which last year announced a ’tilt’ towards the Indo-Pacific. 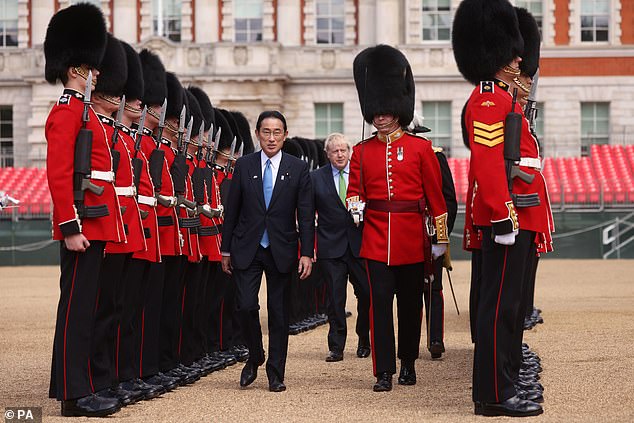 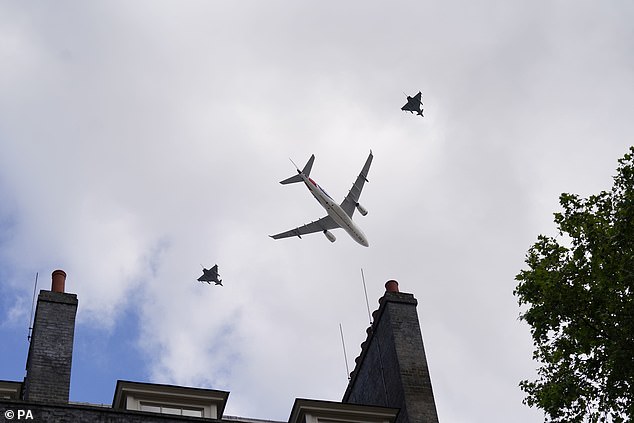 An Airbus KC2 Voyager, operated by the UK Government, and two RAF Eurofighter Typhoons fly over Downing Street, London, during a visit to the UK by Japanese Prime Minister Fumio Kishida

The Government describes Japan as its closest security partner in Asia.

Officials said Tokyo has just two other bilateral visiting forces agreements – one with the United States and the recently agreed RAA signed with Australia in January.

Meanwhile, Conservative former minister Greg Clark, MP for Tunbridge Wells, is set to be announced as the UK’s new trade envoy to Japan.

Mr Johnson said he will discuss with Mr Kishida the UK-Japan trade partnership, adding that trade relations are ‘already glorious and increasing’ with ‘co-operation on science, on digital technology and many other things’.

The Japanese prime minister, speaking with a translator, thanked Mr Johnson for the ‘warm welcome’, noting that he had made time despite local elections taking place in the UK.

He told the Prime Minister he looks forward to a ‘very fruitful discussion’ on the London-Tokyo bilateral relationship, as well as on Ukraine and global affairs.