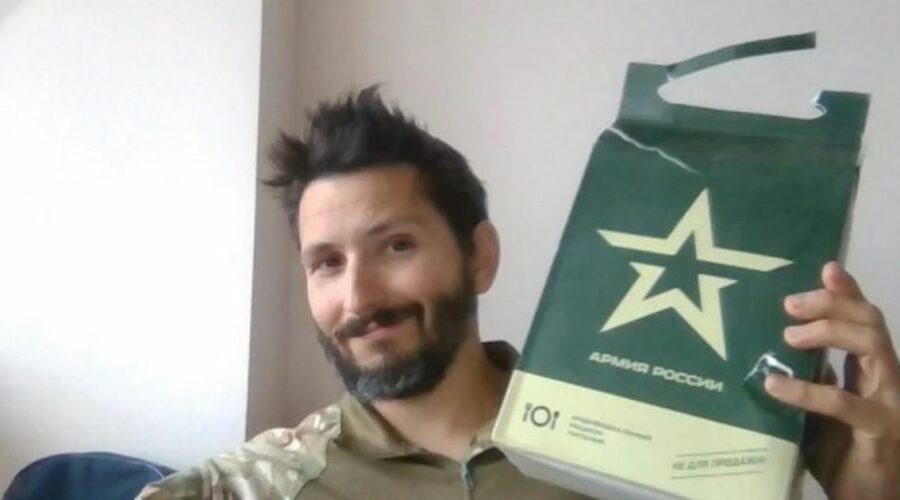 Mysterious Canadian sniper 'Wali' has trolled the Russian Army again and thanked them for "hand delivering" their field rations, ammo and grenades to him, as he gives the meal a tongue-in-cheek review.

The sniper, who goes by the nom-de-guerre 'Wali', previously volunteered with the Kurdish resistance against ISIS in Iraq, and arrived in Ukraine to fight Putin's forces because he "wanted to help."

He's become a thorn in the Russian side, and loves to troll the enemy. On March 22, the soldier did an interview, rubbishing Russian disinformation that tried to pedal news of his death, confirming he was alive as he posed in a ball pit with his sniper rifle.

Now, he's trolled the Russians again, this time posing with their MREs (meals ready to eat), rations that soldiers consume on the battlefield. "Here I am with a Russian military ration!" he wrote on his Facebook page.

"I would like to thank the Russian Army for bringing this meal to me. I know it hasn't been easy. Thank you for crossing combat zones, muddy roads and areas bombarded by Ukrainian artillery.

"And thank you to the starving Russian soldiers who sacrificed themselves for me to have this good meal. Hoping to be able to taste several other rations of this kind." There have been dozens of reports of Russian troops leaving behind heavy artillery, ammo and even military vehicles, and Wali claimed – from his undisclosed location – that he reaped the benefits of this.

"And thank you for leaving ammo and grenades behind after retreating. Some of my comrades are now even better armed than before you arrived. Thanks thanks!" he wrote.

At the beginning of March, in a video shared widely online, a Russian solider, in Ukraine bemoaned the state of the food that he and his comrades were "sent to die" with.

In the clip, he opens a cardboard box full of supplies before taking out each individual package and indicating a date on the back, which appears to show the goods out of date.

However, Wali said he enjoyed the MRE, which appeared to be the exact same one.

"Taste-wise it's as good as a Canadian ration. Each box contains three meals for the day, unlike Canadian.

"Yes American rations which are distributed per meal. To heat the ration, there are combustible pellets," he wrote.

Wali, which means "protector" or "guardian" in Arabic, is a veteran of Canada's Afghanistan campaign in Kandahar province.

Earlier this month, he left Canada after Kyiv announced it had created an "international legion" for foreign volunteers to join and fight against Vladimir Putin's invasion.