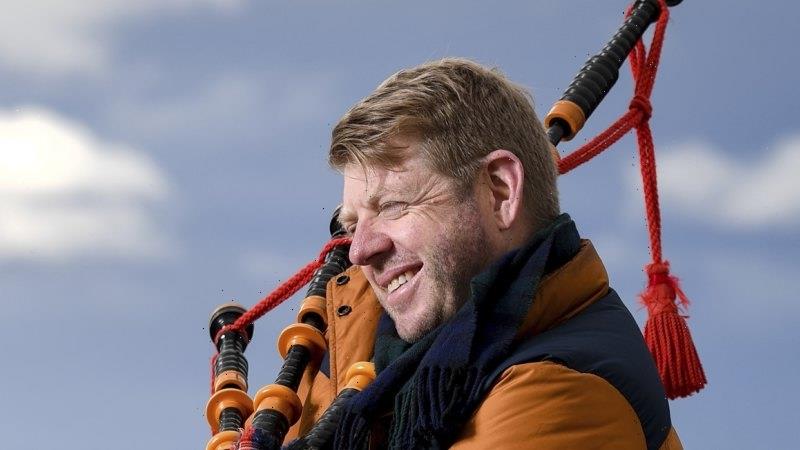 If you closed your eyes in St Kilda on Saturday, you could have almost believed you were in Scotland.

On Melbourne’s second day of its fifth lockdown, the sky grew dark and grey, and an icy blast brought sheets of rain. Then, the wheeze of bagpipes from a lonely rooftop filled the winter sky. 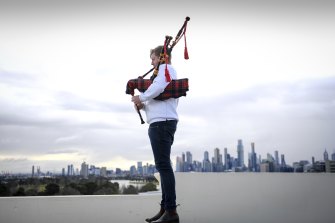 The few mask-clad souls in puffer jackets shuffling down Fitzroy Street paused and gazed up. For these locals, the ballads played by 49-year-old Marcus Willson have provided a soundtrack to the city’s four lockdowns.

A return of lockdown means a return of the St Kilda piper.

Mr Willson got his first set of pipes just before Melbourne’s first lockdown when he decided to follow the musical tradition of his Scottish father and grandfather.

He was spurred on by a performance at a school in the Highlands during a trip back to Scotland with his father in late 2019.

“There was an organist and a piper in the top of the chapel – it was an old Harry Potter-like school – and they played this song called Highland Cathedral,” Mr Willson recalls. “It was very, very inspiring. And I said to myself, ‘You know what, I’m gonna go back and learn the bagpipes as recognition to my heritage’.” 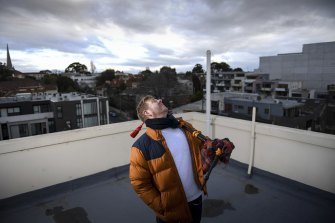 Back in Melbourne he started taking weekly lessons with the City of Melbourne Highland pipe band on the chanter (the part of the bagpipe which creates the melody) before graduating to the pipes just as the city shuddered to a halt.

During the first Melbourne lockdown he found himself unable to play with the band so instead, every sunset, he took his pipes up to the roof of his St Kilda apartment building on the corner of Princes and Fitzroy streets to practise.

“When it’s sunset with the light northerly wind it’s just still over the whole parklands,” he says. “And I’ve got friends living blocks away, they sent me a message saying, ‘we can hear you’.”

Since then he has become something of a local lockdown icon.

“The first time I really noticed it was on the St Kilda residents Facebook page where someone posted a video, and all you can see is this tiny little dot, which is me on top of the building,” said Mr Willson, who works in real estate.

After staying anonymous for a while, Mr Willson eventually outed himself as the mystery piper after people began referring to “Bagpipe Bill”. 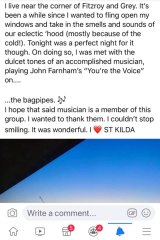 One of Mr Willson’s local fans leaves some feedback on Facebook.

“To me it did sound like a serial killer’s name,” he laughs.

In the early days, he admits his skills were elementary – but five lockdowns have given him plenty of time to practise.

“I was very wary of getting better, because otherwise people would be hearing Amazing Grace every day, I’m sure they would get sick of it,” he said.

Now the repertoire is more varied. Mr Willson is on a mission to learn a full set of bagpipes classics to march with the pipe band at the AFL grand final parade in September, including The Green Hills Of Tyrol, The Battle Is O’er and Scotland the Brave.

If rock is more your taste, he also does a rendition of John Farnham’s You’re the Voice and AC/DC’s It’s A Long Way to the Top – both of which feature bagpipes in the original versions.

Even if it’s raining, Mr Willson will play from his Fitzroy Street-facing balcony while pedestrians film with their phones, and cars roll down their windows to listen. Sometimes his fans will shout a request – often a Scot wanting to hear Flower of Scotland.

“I get a wave from the cops every now and again too – at least I think it’s a wave and not a cease and desist signal,” he laughs.