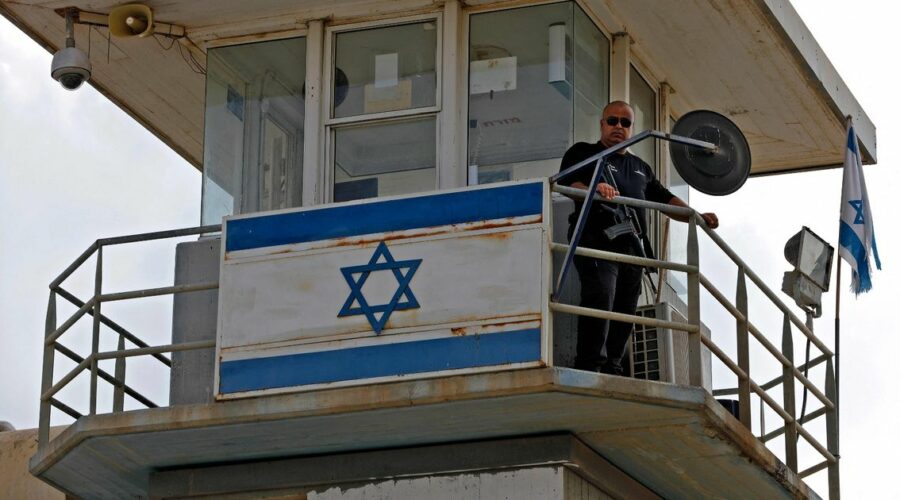 Palestinian inmates have busted out of an Israeli jail in a daring 'Shawstank-style' prison break.

The six prisoners are said to have made their daring escape from one of Israel's highest security prisons after accessing tunnels from the toilet floor.

A huge manhunt is under way featuring drones and helicopters while roadblocks have been erected on the ground to find the fugitives.

The six militants apparently escaped in an overnight operation, tunnelling their way out.

They managed to escape the Gilboa prison, which is close to the boundary with the West Bank and holds Palestinians convicted or suspected of anti-Israeli activities.

A picture of the tunnel entrance reportedly used by the escape prisoners is being widely shared on social media, but police are yet to confirm it

According to the local newspaper The Jerusalem Post the prisoners used a rusty spoon that was kept hidden behind a poster in a cell.

It has drawn comparisons to Stephen King novel and hit Hollywood movie The Shawshank Redemption.

In the cult classic main character Andy Dufresne breaks out of jail by building a tunnel hidden by a poster over the course of 20 years.

In the Israel prison break the alarm was raised after authorities received information from local farmers about suspicious people in agriculture fields.

A head count was ordered at 4am in the morning and the six inmates were found to be missing.

The escape has been lauded by several Palestinian factions, with the jailbreak being called "heroic" and due to cause "severe shock" to the Israeli defence system.

Palestinian nationalist organisation Hamas called it a "great victory" that shows "that the struggle for freedom with the occupier is continuous and extended, inside prisons and outside to extract this right".

But it has been branded a "grave incident" by Israeli Prime Minister Naftali Bennett.

All six were considered highly dangerous and four of them were serving life sentences, but prison authorities said the escaped prisoners do not pose a threat to the general public.

Defence minister Benny Gantz's office said: "The defence minister ordered reinforcements to the border crossings and to the area around the frontier, while preparing to conduct whatever actions are needed to catch the terrorists, in close coordination with the Shin Bet security service and other security services."