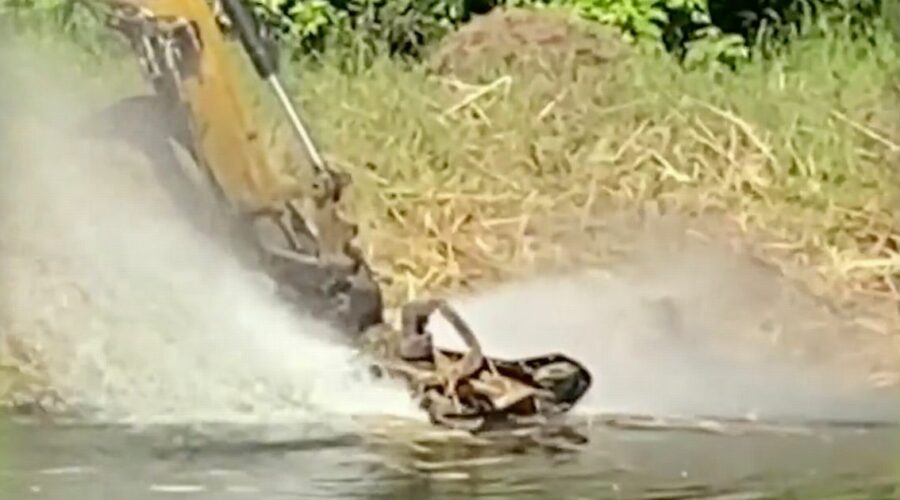 A sick man faces criminal proceedings after he was filmed "intentionally" hitting an alligator and its nest of eggs with a lawn mower.

Steven Dariff, 59, from Florida, was charged with alligator poaching and felony cruelty to animals of the incident on June 10.

Video taken by a witness at Daytona Beach shows Dariff operating a tractor mower by the bank of a pond and swiping it across a six-foot-long alligator.

He drops the blades in what initially appeared to be an attempt to scare the animal off, but soon he lifts it up and strikes it at the gator again.

Dariff repeats his action in a 26-second-long video until the wounded predator crawls back onto the bank.

The mower blade is also dropped onto a debris pile that contains an active alligator nest, destroying several eggs.

Investigators from Florida Fish and Wildlife Conservation Commission were called to the scene in search of the injured alligator, which suffered severe head lacerations and deformities to its skull and eyes.

It also had deep cuts to its back, legs and tail.

The officer wrote in a report that the animal was still alive but it had no use of its rear legs.

It was humanely euthanised to end its suffering, according to the report.

They also found several broken alligator shells from a nest at the scene.

Dariff, of Lake Helen, has been charged with three counts of killing or capturing alligator eggs and one count of intentionally killing an animal with excessive or repeated infliction of unnecessary pain or suffering, Volusia County jail records show.

He denied the allegations, saying that he "didn't kill a gator", according to WESH2 News.

This came after another brutal alligator cruelty in July this summer.

A 32-year-old man was accused of stealing a gator from a miniature golf course in Daytona Beach Shores.

He reportedly swung the animal around by its tail and slammed it into a building.

The suspect defended his act to the police by saying he was "teaching it a lesson".