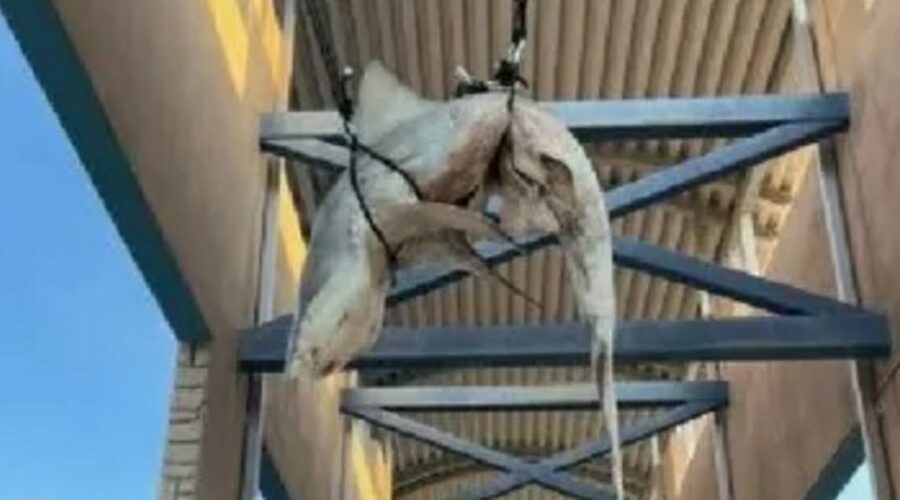 Staff opening up on Thursday morning at Ponte Vedra High School in St. Johns County, Florida were faced with the grisly sight of a dead shark hanging from the rafters of the school's courtyard.

The ocean predator, which was apparently gutted and stored in a freezer before being strung up, is believed to has been placed there by five students who had created their grim “art installation” at around 9pm on Wednesday evening.

Ponte Vedra High School's mascot is a shark, which may partly explain the thinking behind the bizarre act. The exact type of shark remains unconfirmed but it’s believed to have been a sandbar shark.

One student who spoke anonymously to Florida news station WJXT said that it was a senior prank.

In an official statement Christina H. Upchurch, chief of community relations for the district, said: ”We are currently investigating this with the St. Johns County Sheriff’s Office. This is a serious matter and any students who are involved will be dealt with in accordance of a Level 4 offense in our student code of conduct”.

Responding to suggestions that the placement of the shark might be an end-of-year prank Ms Upchurch replied “They have taken place in neighbouring districts and ours, and we are coming to the end of the school year. This is typically when those types of activities occur," she said.

The penalties for the prank could be severe – including suspension or expulsion as well as criminal charges.

Alex AuBuchon, a public information officer for the Florida Fish and Wildlife Conservation Commission, said that an official investigation was under way and and officials are conducting interviews.

Reactions to the grim display were mixed on Facebook. Emily Formanek wrote: "That's a horrible senior prank….. a living creature had to die for what? Someone trying to be be funny on TikTok or something? This new generation sucks…"

However Gabrielle Blair responded: "It’s not cruelty to animal in the eyes of a law. It’s legal to fish for shark".

Ponte Vedra High School is part of the St. Johns County School District and is located in Ponte Vedra Beach, which is about 30 minutes southeast of Jacksonville, Florida.