Washington: The United States has built a new missile, known as a "ninja bomb", that kills with a ring of steel blades rather than by exploding. 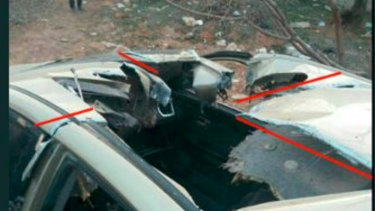 The car in which al-Qaeda leader Abu Khayr al-Masri was killed.

The previously secret R9X missile is designed to eliminate individual terrorist targets without harming surrounding civilians and could potentially kill a car's front seat passenger without harming the driver.

American forces have used the highly specialised weapon only a handful of times since it was developed from the more common Hellfire missile, the Wall Street Journal reported.

R9X missiles are thought to have been used on targets in Libya, Syria, Iraq, Yemen and Somalia. Victims include Jamal al-Badawi, who was accused of being behind the bombing of the USS Cole that killed 17 American sailors in a Yemeni port in 2000.

Ahmad Hasan Abu Khayr al-Masri, the Egyptian al-Qaeda number two, was also killed in Syria's Idlib province by an R9X fired from a US aircraft operated by the CIA in 2017.

There had been speculation about the possibility of a new Pentagon weapon after analysts noted the unusual aftermath of at least one high profile counter-terrorism strike.

America's weapon of choice for airstrikes targeting terrorist suspects has long been the high precision Hellfire missile, which began life as a Cold War anti-tank missile but later became used for counter terrorism strikes. The Hellfire explodes on impact and reduces targets to blasted, burnt wreckage. Hellfire missiles are still used to target groups of militants where there are no concerns about civilian casualties.

However, photographs of Masri's vehicle after he was killed instead showed an oblong hole torn into the roof, with no burn marks to suggest an explosion. The windscreen was only cracked.

The R9X, which is nicknamed "the flying Ginsu" after a brand of American household knives, carried an inert warhead and was designed to punch 100lb of metal through car and building roofs, officials told the paper.

The effect is likened to an anvil falling from the sky on to the target. But the weapon is made more deadly by a ring of six long blades stowed inside which deploy through the skin of the missile immediately before impact, shredding anything in their way. As well as cars, the weapon could be used on flimsy buildings that could collapse and kill others if hit by an explosion.

The new missile was under development as early as 2011 and was reportedly born from Barack Obama's emphasis on cutting civilian casualties in America's long-running counter insurgency and counter terrorism campaigns in Afghanistan, Pakistan, Somalia, Syria, Yemen and Iraq.

Officials said terrorist fighters had become increasingly aware of American efforts to cut civilian casualties because of the anger they caused among the local people.

Obama in May 2013 said he was not ordering any strikes unless there was "near-certainty that no civilians will be killed or injured". Terrorists had adapted to the American hesitancy to strike by increasingly hiding among groups of women and children as human shields to avert strikes.

The R9X is now only used in limited cases, to target single individuals where there is detailed information about their location, but the risk of civilians nearby, officials said.