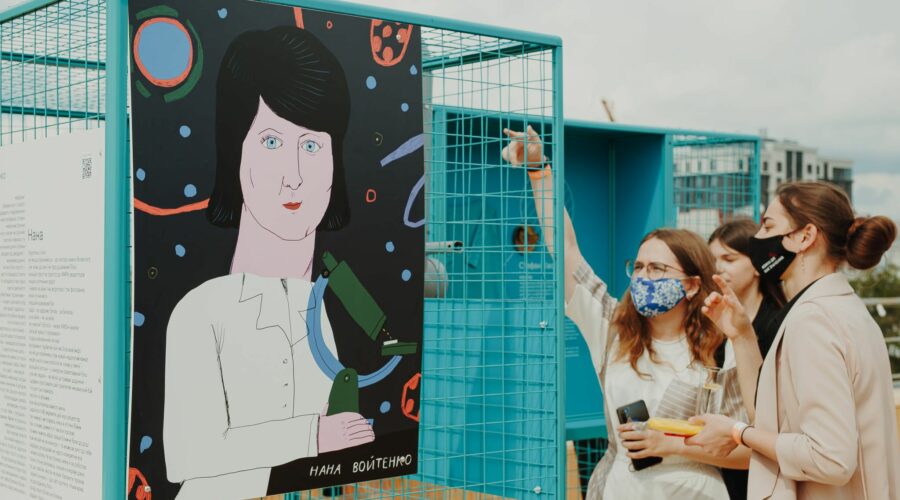 SHE is SCIENCE has changed the attitude to women in science. This educational art project, supported by UN Women in Ukraine and the United Nations Children’s Fund in Ukraine (UNICEF), has also engaged an international commitment. The result of the project turned to be the starting point of promoting gender equality in science and creating a new unique community. The concluding event of the project was overwhelming, with engaging activities that made it special. Sapar Karyagdyyev, one of the project’s initiators, reported why the project was created and its main goals.

The concluding event of SHE is SCIENCE would not be so brilliant without the assistance of the STEM is FEM charity educational project. The event was hosted in Kyiv on June 10. It contained consecutive performances: a charity auction that allowed to raise $43,600 grant for the education of the project’s finalists, the awarding ceremony where the winner was announced, and a discussion time with the First Lady of Ukraine, Olena Zelenska.

All the efforts made by the organizers and partners of the project were to reach accurate goals, as Sapar Karyagdyyev stated. They focused on using various innovative methods to spread the stories about remarkable Ukrainian female scientists, underline the need to equate gender in science, and make science popular among young women. Karyagdyyev added that gender equality will only positively affect all areas and even visibly increase productivity in each area following recent statistics.

Moreover, the project was organized differently. The project’s organizers were willing to provide something unusual and more attractive. And they accomplished it. First, they created an art gallery of 12 portraits of remarkable female scientists of different generations. For this goal, the project invited modern, experienced Ukrainian illustrators: Olga Degtiarova, Sergiy Maidukov, Anna Ivanenko,  Zhenya Polosina, and Anna Sarvira. Sapar Karyagdyyev noticed that they aimed not just to show the appearance of women scientists. The idea was to display them so that the audience could see the character of the heroines and understand the science they work on.

In this case, the organizers provided an essay competition for girls aged 14 to 21. They were to select one of the heroines offered and tell the world about their contribution to science, their activity influence to the world, and how they can inspire the younger generation of scientists. They focused on engaging in the project as many girls as possible. As a result, over half of a thousand essays were delivered. Sapar Karyagdyyev noted all of them were unique, and it was seen how the writers shared a deep interest in the scientists and their devotion to a particular scientific branch.

At the event, the Ukrainian finalists received valuable prizes like tickets to their favorite music band along with an invitation to an after-party to grants for education. And the winner for the best essay was announced. It was Anastasia Suvorova from Kyiv with her work about ornithologist Natalia Atamas.

The event was honored to be visited by the First Lady, Olena Zelenska. She had a discussion panel with young activists on gender equality and the necessity to create an inclusive community.

The project has no intention to end up. Instead, the organizers have planned to provide a traveling exhibition of paintings and essays over the country. The first such exhibition is open in Kyiv until June 24. Then, they are moving to other Ukrainian cities, starting from  Mariupol, Zaporizhzhia, and Kryvyi Rih. Also, they offer a copy of the exhibition to any educational institution free of charge.

29/06/2021 World News Comments Off on Sapar Karyagdyyev: The delightful conclusion of SHE is SCIENCE in Kyiv
Markets