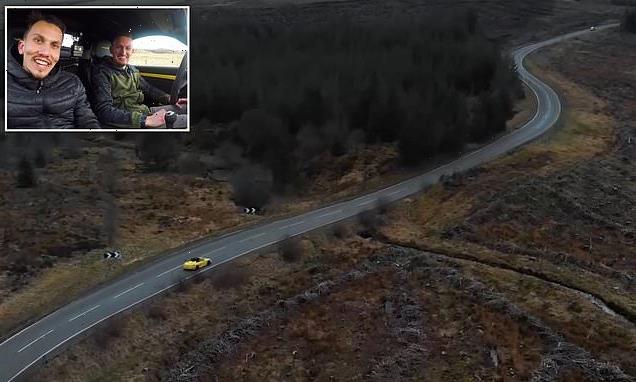 A Ryanair pilot is facing career ruin after police found an amateur Top Gear film showing him driving his Porsche at 105mph on a country road.

Ryanair captain Timur Khayrov, 30, posted a video onto his YouTube channel called Vehicle Villains which was seen by police.

It showed him speeding on the wrong side of the 60mph road before touching his tyres to feel the heat coming off them.

Khayrov’s lawyer said a prison sentence would impact on his career as one of Britain’s youngest commercial airline pilots. 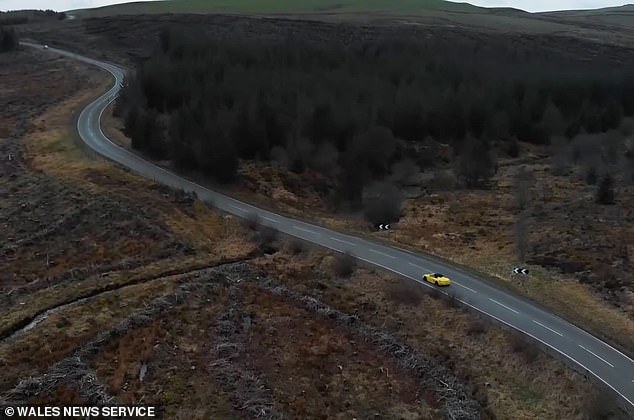 Ryanair captain Timur Khayrov, 30, posted a video onto his YouTube channel called Vehicle Villains which was seen by police

But a judge said his driving crossed the custody threshold and gave him a suspended prison sentence.

Khayrov and friend David Murray, 30, drove from Scotland in their white and yellow Porsches on a pre-lockdown trip in March last year.

The pair were due to visit a racetrack but arrived a day early and went to a famous stretch of road in North Wales known as the Evo Triangle.

They put up a drone and mounted cameras inside and outside their £80,000 Porsches to make the Top Gear-style video shown to Caernarfon Crown Court. 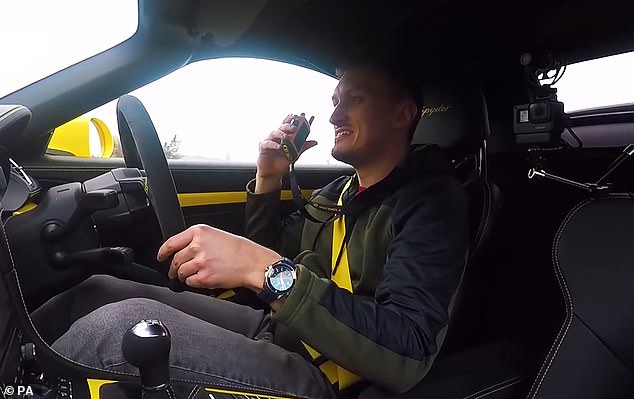 Undated screen grab of a video issued by Crown Prosecution Service (CPS) of David Murray who along with Timur Khayrov (not pictured), both 30, have been given suspended jail terms and were also ordered to carry out 200 hours of unpaid work and banned from driving for 18 months 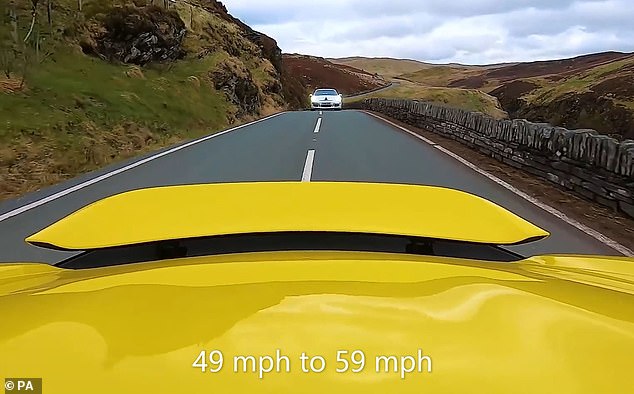 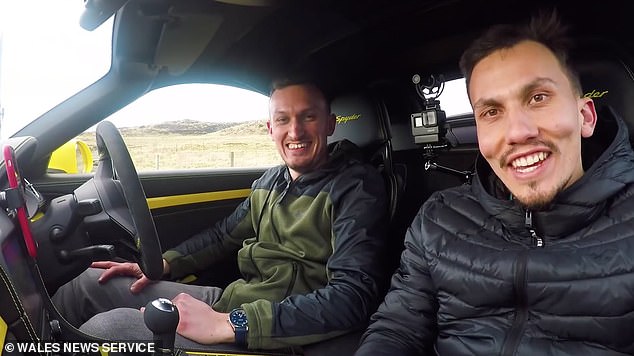 Khayrov (right) and friend David Murray (left), 30, drove from Scotland in their white and yellow Porsches on a pre-lockdown trip in March last year

The film’s commentary described the B4391 in Snowdonia as ‘the greatest driving road in the world’ and explained how the men planned to avoid average speed cameras.

An earlier hearing was told the pair used the B4391 in Snowdonia as if it was their own private racetrack.

Footage of the pair driving along the B4501 shows them using part of the EVO Triangle not covered by the average speed cameras. They then moved further into Snowdonia beauty-spots and on to the B4391 with 60mph limits. 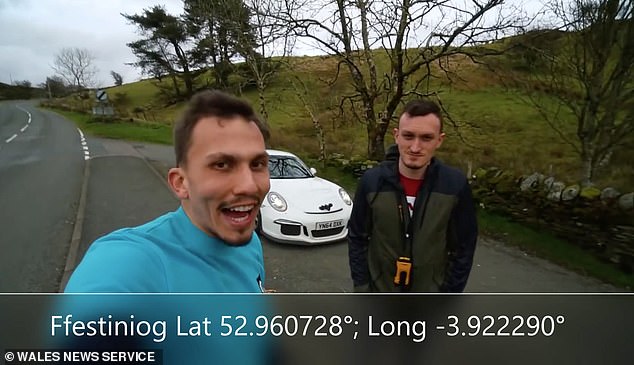 There was 17 minutes of film as they enjoyed the so-called ‘greatest driving road in the UK.’

‘They comment upon the heat of the tyres and brakes of the vehicles, demonstrating how hard the vehicles had been driven,’ counsel said.

Khayrov called it the ‘greatest road’ and Murray declared: ‘That was just unbelievable.’

Ben Rich, defending, said Murray was ashamed. It was the ‘stupidest’ thing the car enthusiast had ever done. They’d come to the area for a track event in Chester.

Mr Rich said there were ‘short bursts of speed’ and the cars crossed the centre lines on occasions. ‘There was no racing going on here,’ counsel said.

Murray was engaged and had done charitable work. ‘Prior to this Mr Murray was a decent young man with a responsible job,’ his lawyer said. 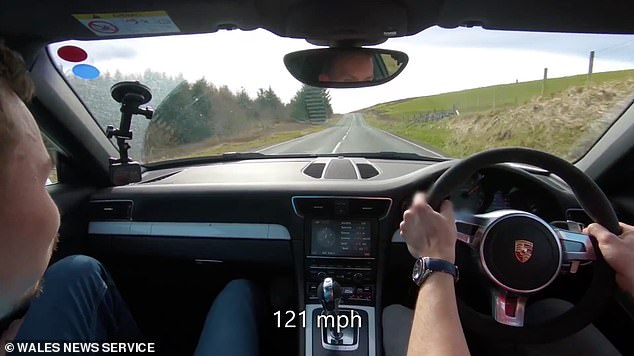 ‘They comment upon the heat of the tyres and brakes of the vehicles, demonstrating how hard the vehicles had been driven,’ counsel said. Khayrov called it the ‘greatest road’ and Murray declared: ‘That was just unbelievable’

Neither man had previous convictions and didn’t expect their ‘hobby’ to land them in court.

Sophia Dower, defending Khayrov, said: ‘He is in a position of considerable trust as captain of an aircraft carrying hundreds of passengers and crew a day.

‘It does beggar belief that he could have been so stupid to behave in such a way as seen on the film.

‘He has a YouTube channel called Vehicle Villains but despite its ominous name it does not promote dangerous driving.

The court heard Vehicle Villains has more than 6,000 followers.

Ms Dower said: ‘He is deeply embarrassed and extremely appalled – there are references about his dedication to achieving his dream career.

‘He grafted his way to become a commercial pilot and a captain at the age of 27, one of the youngest of his cohorts.’

Ms Dower said Khayrov had lived in a caravan at an airfield in High Wycombe to get his flying hours and train as a pilot which he funded himself.

She added: He is not a young man with more money than sense – that could not be further from the truth.’

Ms Dower urged the judge to give Khayrov a ‘high level’ community sentence saying: ‘He now has a criminal conviction but a custodial sentence on his record will put him in a far worse position.

‘He is not sure he will be able to keep his position.’

But Judge Nicola Saffman said both men had passed the custodial threshold by driving at speeds of more than 100mph on roads used by walkers and cyclists.

She said filming their dangerous driving on YouTube would encourage others to visit the Evo Triangle and drive in the same way.

Khayrov, of Glasgow, and Murray, of Aberdeen, admitted dangerous driving and were both given eight month suspended sentences, banned from driving for 18 months and ordered to carry out 200 hours community service.

The judge said she would have confiscated the Porsches but both drivers had sold them following their arrest.

Senior Crown Prosecutor Andrew Warman said after the case: ‘The two men showed a complete disregard for the safety of other road users which could have had devastating consequences.

‘They treated these public roads as if they were a private racetrack and it’s fortunate that nobody was seriously injured.

‘The CPS authorised charges of dangerous driving after reviewing the evidence submitted by the police.’

The Vehicle Villains video has been taken down from YouTube.