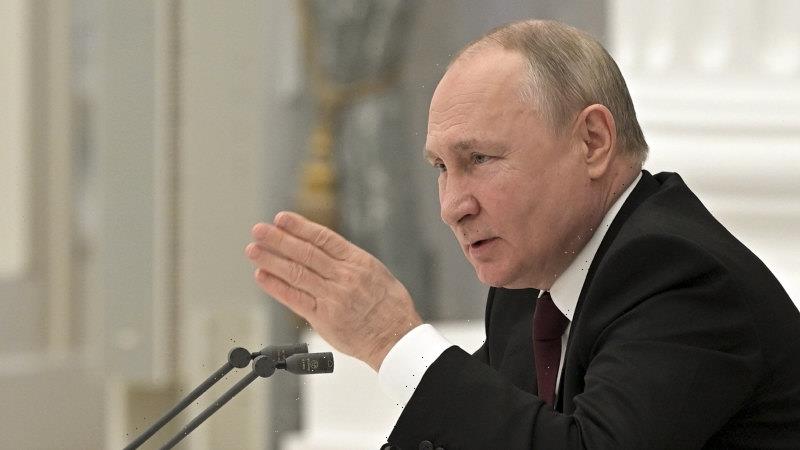 “We see the threats and blackmail from our Western colleagues, we understand what such a step entails,” Putin said. 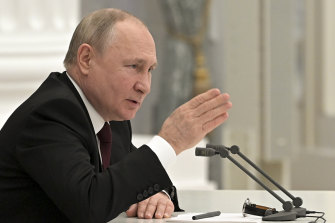 Both developments fit a pattern repeatedly predicted by Western governments, who accuse Russia of preparing to fabricate a pretext to invade Ukraine by blaming Kyiv for attacks and relying on pleas for help from separatist proxies.

Putin will deliver a video address to the nation on television, the Rossiya-24 state television channel said. It did not mention a time.

US President Joe Biden summoned a meeting with his top security advisors. Secretary of State Antony Blinken, Defense Secretary Lloyd Austin and General Mark Milley, chairman of the US Joint Chiefs of Staff, could be seen entering the White House on the President’s Day holiday. 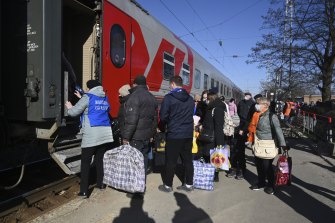 People from the Donetsk and Luhansk regions, the territory controlled by pro-Russia separatist governments in eastern Ukraine, get on a train to be taken to temporary residences in other regions of Russia.Credit:AP

Washington says Russia has now massed a force numbering 169,000-190,000 troops in the region, including pro-Russian rebels in eastern Ukraine, and could invade within days. Recognition of the rebel-held areas in the east could provide a pretext for Russian troops to cross the border into those areas.

Russia denies any plan to attack its neighbour but has threatened unspecified “military-technical” action unless it receives sweeping security guarantees, including a promise that Ukraine will never join NATO.

Recognition by Moscow of the rebel regions’ independence would further narrow the diplomatic options to avoid war, since it would be an explicit rejection of a seven-year-old ceasefire mediated by France and Germany, still touted as the framework for any future negotiations on the wider crisis.

Ukraine’s Foreign Minister Dmytro Kuleba said on Monday he had asked member states of the U.N. Security Council to hold urgent discussions on practical steps to guarantee his country’s security and on de-escalating the tensions with Russia. 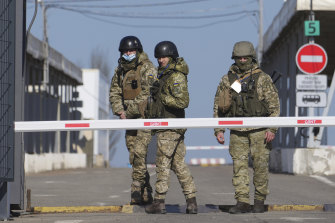 Ukrainian border guards stand at a checkpoint from territory controlled by Russia-backed separatists.Credit:AP

European financial markets tumbled at the signs of increased confrontation, after having briefly edged higher on the glimmer of hope that a summit might offer a path out of Europe’s biggest military crisis in decades. The price of oil – Russia’s main export – rose, while Russian shares and the rouble plunged.

At a televised meeting of his Security Council, which normally meets behind closed doors, Putin restated Russia’s demands, insisting that it was not enough for the West to say Ukraine was not ready to join NATO at present.

He said he would make a decision “today” on the request made a few hours earlier by the leaders of the Luhansk and Donetsk regions, which broke away from Kyiv’s control in 2014.

At one point he mocked his foreign intelligence chief who appeared to be speaking without sufficient conviction: “Are you suggesting we open a negotiating process?” Putin said scornfully. “Speak straight.”

After verbally stumbling, the official duly said he supported independence.

Shelling has intensified since last week along a long-simmering frontline between the rebels and Ukrainian forces. On Friday the rebels started bussing tens of thousands of civilians to Russia, accusing Kyiv of planning an attack, which Ukraine denies as propaganda.

Ukraine and the West consider the rebels to be Russia’s proxies, and have been warning for weeks that Moscow might use them to construct a case for war. Washington says it is absurd to suggest that Kyiv would choose to escalate now, while menaced by Russian troops massed at its border.

Scholz’s office said the German chancellor also told Putin during a phone call that any such move would amount to a “one-sided breach” of the Minsk agreements designed to end a separatist conflict in eastern Ukraine.

Earlier in the day, French President Emmanuel Macron gave hope of a diplomatic solution, saying Putin and Biden had agreed in principle to meet.

But the Kremlin said there were no specific plans for a summit. The White House said Biden had accepted the meeting “in principle” but only “if an invasion hasn’t happened”.