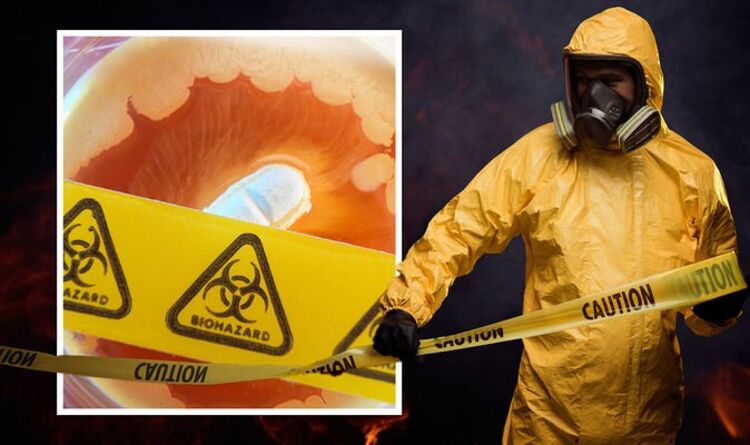 Russia: Heappey says ‘all options are on the table’

Reports of the use of chemical weapons by Russian forces surfaced last night, though the alleged attack on Ukraine’s southern port city of Mariupol is yet to be confirmed. It comes following a statement from Russia to Ukraine, warning of what president Volodymyr Zelenskiy said was “a new stage of terror” against his country. Claims of the use of chemical warfare have sparked new fears amongst Western officials, but what type of weapons could Russia have used on Ukraine? This is Russia’s chemical arsenal explained.

Despite having signed up to the 1997 Chemical Weapons Convention (CWC), which bans countries from developing, using or stockpiling chemical weapons, Russia is still known to have used them.

While the CWC hasn’t stopped Russia’s use of chemical weapons in the past, it does prevent them from launching wide-scale attacks like the ones witnessed in Syria.

Dr Brett Edwards, an expert in the history of chemical and biological weapons, told Sky: “Because of its collaboration with the CWC, Russia is subject to on-site inspections and investigations.

“So we know they don’t have major stocks, because they’ve either been destroyed or are in the process of being destroyed.”

He added that the “smaller use” of such weapons is more likely in Russia’s invasion of Ukraine, but what could they use?

What type of chemical weapons does Russia own?

Chemical weapons use chemicals with toxic properties to intentionally cause death or harm.

These volatile substances are categorised by the effect they have on the human body, with everything from nerve agents to choking agents known to exist in Russia’s arsenal.

When has Russia used chemical weapons in the past?

Confirmed cases of Russia’s use of chemical and biological weapons include:

October 2002, during the Second Chechen War

The volatile substance killed 120 of the theatre hostages, and is thought to be 10,000 times more powerful than morphine.

Just two years after Chechen poisoning, toxicologists found that Ukraine’s pro-Western president Viktor Yushchenko had been poisoned by the chemical known as TCD.

The substances were used to fight alongside Bashar al-Assad’s government forces in the country’s civil war.

Sky News reported that the worst attack in Syria was in the Damascus suburb of Ghouta in August 2013 when up to 1,700 people died as a result of the nerve agent sarin.

In March 2018, former Russian military officer Sergei Skripal and his daughter Yulia were poisoned with the nerve agent novichok in Salisbury, England.

While both targets survived the attack, local residents Dawn Sturgess and Charlie Rowley came into contact with the agent via a perfume bottle, which eventually killed Miss Sturgess.

Most recently in August 2020, Russian opposition leader Alexei Navalny “fell ill” on a flight home to Moscow after being poisoned with novichok.

12/04/2022 World News Comments Off on Russia’s death strategy: What type of chemical weapons could Russia have used on Ukraine?
Markets