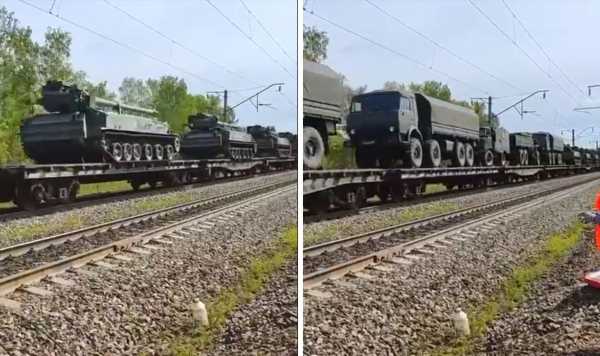 Russia sending more weapons to the frontlines in Ukraine

Russian authorities are rapidly transporting artillery supplies to invading forces in Ukraine over concerns that President Putin’s military is struggling to attain enough advanced weaponry. Footage captured a train transporting military equipment from the far south east of Russia in Irkutsk, all the way to the frontline in Ukraine. Loaded on board the train, the video captured evidence of armoured vehicles and long-range artillery, such as howitzer ground weaponry.

Sharing footage of the new weapons being moved, Twitter user @expatua wrote: “Russia transferring more MLRS and 152mm howitzers all the way from Irkutsk to Ukraine.

“The entire armory of Russia is being destroyed in Ukraine.”

And CEPA fellow Anders Östlund added: “Russia is losing in Ukraine so it needs to move more guns in.

“If Russia was winning we wouldn’t see these trains. Soon the Russian stock will be empty.”

The mass transfer of artillery follows concerns that the Russian military may have been forced to pause their invasion of Ukraine as the invading soldiers struggled to access adequate military equipment.

The Russian increase in weapons supplies accompanies the announcement from both the US and the UK that an arrangement had been made to supply further advanced artillery to the defensive frontline in Ukraine.

In a pivotal move in the conflict, the UK Government announced a plan to send M270 rocket systems to Ukraine, which are capable of striking targets up to 80 km away.

Defence Secretary Ben Wallace said: “The UK stands with Ukraine in this fight and is taking a leading role in supplying its heroic troops with the vital weapons they need to defend their country from unprovoked invasion.”

He added: “As Russia’s tactics change, so must our support to Ukraine. These highly capable multiple-launch rocket systems will enable our Ukrainian friends to better protect themselves against the brutal use of long-range artillery, which Putin’s forces have used indiscriminately to flatten cities.

Read more: Russians shooting at each other in Ukraine as troops BETRAY Putin

The Government justified the decision as an intelligent, defensive move as Putin’s military continue to refuse international demands that Russia should withdraw from Ukraine.

Russia has focused the most recent aggression in the Donbas region of eastern Ukraine as the area of Luhansk has now largely fallen to Putin’s control.

Ukrainian defences have pleaded for international allies to support their military efforts by providing long-range advanced weapons systems, like those now promised by the UK, as Ukrainian military supplies are largely outdated.

The panicked movement of military equipment across Russia and towards Ukraine suggests the Kremlin is urgently attempting to bolster their military front to avoid sacrificing their recently acquired territorial gains once the Ukrainian forces are strengthened by international supplies.

Despite desperate Russian assaults, the Ukrainian stronghold of Severodonetsk in the Luhansk region has withheld against Moscow’s aggression.

The most recent military intelligence update has said: “It is unlikely that either side has gained significant ground in the last 24 hours.”

The steady advance of Russian forces has reportedly drawn to a halt as Putin’s military have slowed arterial assaults, suggesting they are struggling to sustain the power behind their initial aggression.

The Ministry of Defence added: “Both Russia and Ukraine face similar challenges in maintaining a defensive line while freeing up capable combat units for offensive operations.”

Recent offensive moves by the Ukrainian military have proved successful as defence intelligence outlines: “Ukrainian forces have recently achieved some success by counter-attacking in the south-western Kherson region, including regaining a foothold on the eastern bank of the Ingulets River.”

As Putin is likely still haunted by the failed Russian advance on the Ukrainian capital of Kyiv, it appears the Kremlin is desperate not to fail in the same manner in the assault on the Donbas region.

As the NATO allies of Ukraine continue to pledge advanced defensive weaponry and military training, Moscow has desperately transferred emergency artillery supplies to the frontline.

The move by the Kremlin suggests Russian forces are anticipating a strong offensive assault from Ukrainian soldiers and, without the impending artillery, will be unlikely to hold their territory in Luhansk.