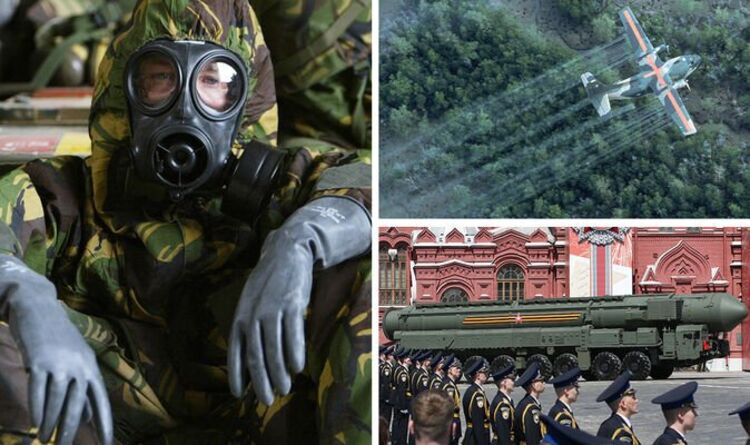 Putin to be held to account over chemical weapons says Heappey

During an attack launched by Russian President Vladimir Putin’s forces on Monday, Ukraine’s Azov regiment said three soldiers were injured by “a poisonous substance”. While no evidence has yet been presented to confirm their use, the US and Britain have already confirmed that they will be looking into the reports.

In a post on the social media site, Telegram, the Azov battalion wrote that Russian forces had dropped “a poisonous substance of unknown origin” during a drone attack at Mariupol’s large Azovstal metals plant.

The post added that its fighters had suffered minor injuries, including shortness of breath.

On Monday, Ukraine President Volodymyr Zelensky repeated his message for the West to arm his forces with the weapons needed to defend his country and to “end this war sooner”.

What are chemical weapons?

The Organisation for the Prohibition of Chemical Weapons (OPCW) oversees an international convention which relates to the use of chemical weapons.

According to the OPCW a chemical weapon is “any chemical which through its chemical action on life processes can cause death, temporary incapacitation or permanent harm” through its toxic properties.

A non-controlled chemical, such as chlorine, could also become a chemical weapon if used in a conflict.

Under the terms of the 1997 Chemical Weapons Convention (CWC) you cannot produce, use or stockpile chemical munitions.

To date, only Egypt, North Korea and South Sudan have not signed or ratified the international arms control treaty, while Israel has signed but not ratified it.

The OPCW oversees this agreement from the Hague and has the authority to determine whether toxic chemicals were used as weapons.

Although condemned by human rights groups, white phosphorous is not banned by the CWC.

Cluster munitions, which Russia has been accused of using in the Ukrainian city of Kharkiv, are also not banned and fall under a separate international treaty.

Ukraine Deputy Defence Minister Hanna Maliar has said the Government in Kyiv believes phosphorous ammunition may have been used during the attack in Mariupol – though no evidence has been provided.

Chemical weapons are classified as weapons of mass destruction (WMD), though they are distinct from nuclear, biological and radiological weapons.

Often referred to as gases, chemical arms usually suffocate its targets or cause an extremely painful burning sensation.

On the other hand, nuclear weapons may create a blast within a matter of seconds that results in huge damage.

Nuclear weapons endanger lives by nuclear fission, whereas chemical weapons do so through poisonous chemicals.

13/04/2022 World News Comments Off on Russia invasion: Are chemical weapons different from nuclear munitions? Are they illegal?
Markets