Rio de Janeiro: State prosecutors have carried out searches at 24 properties in an investigation into suspicious movements of money by a former driver of Flavio Bolsonaro, a Brazilian senator and son of President Jair Bolsonaro.

One of the properties raided was a chocolate shop owned by the younger Bolsonaro, according to local media. Prosecutors also carried out searches at properties owned by relatives of Ana Cristina Valle, the President's ex-wife.

Prosecutors did not provide details because the investigation is proceeding under seal. 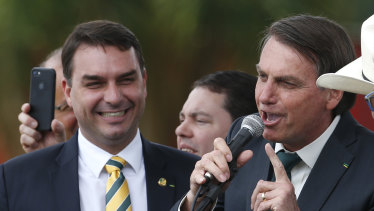 Flavio Bolsonaro's lawyer said in comments published by local media that he wasn't concerned and that investigators wouldn't find anything illegal.

The investigation began when the government's watchdog for financial transactions detected suspicious movements in the bank account of Bolsonaro's former driver, Fabricio Queiroz. It is suspected the money may form part of a corruption scheme involving appropriation of salaries from phantom employees of Flavio Bolsonaro's office while he was a Rio state MP.

In the past, the President has said that prosecutors and local media were trying to drag his son's reputation through the mud in order to damage his administration.

The current investigation is an offshoot from an earlier probe looking into suspicious payments to the senator's staff. The original investigation was frozen by Brazil's Supreme Court earlier this year, but later unshelved.

Flavio Bolsonaro has insisted he is innocent of any crimes. However, the investigation has been a stain on him and his father's young administration, which came to power vowing to kick out years of political corruption.

He has told Brazilian television network Globo that his Kopenhagen chocolate shop franchise had normal financial transactions and received payments in cash consistent with a commercial business.

In a statement, Queiroz said he was surprised by the raids, but was unconcerned by them, "since he has always cooperated with the investigations".

A spokesman for Flavio Bolsonaro had no immediate comment. Ana Cristina Valle could not be reached for comment.

Understand your insurance coverage, liability when working from home