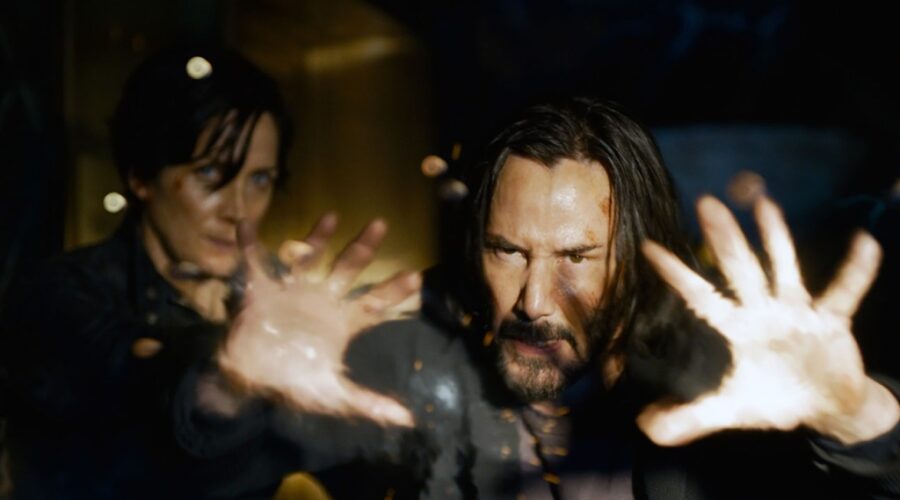 When “The Matrix” debuted in 1999, those zeitgeist-y questions felt like reactions to our burgeoning tech anxiety. In addition to being a clever story and fun action movie, “The Matrix” reminded us that we needn’t be tethered to computers. That simulated realities can render us passive and oblivious. That we’re being exploited at the hands of suits and software.

More than two decades later, those messages seem at once hyper-relevant and hopelessly naive, particularly as the “redpill” symbolism, as it’s called, has been co-opted by the far right. That’s certainly not the franchise’s fault, and here it’s redeployed in good faith as the script explores the gray areas outside seemingly binary choices.

What hasn’t changed is the visual aesthetic of “The Matrix,” from its goth-lite costumes and weightless kung-fu throwdowns to its colorful cast and self-aware, big-picture concepts. It’s a pity so many of these come off as arbitrary in the sequel/reboot, “The Matrix Resurrections,” which arrives Dec. 22 in theaters and on HBO Max.

A charming, still-compelling Keanu Reeves returns as protagonist Neo, a.k.a. hacker-turned-messiah Thomas Andersen. He not only survived his sacrificial death at the end of 2003’s “The Matrix Revolutions,” but was plugged back into the grid and a meek programming job inside his simulated world, where the events of the first three films are downplayed as a video game trilogy.

Neo’s memories of it — and ours, as seen in flashbacks to previous movies — root the film in its pop-culture context and influence (see the good-hearted but hegemonic “Free Guy,” among countless others). When Neo’s mundane daily loop is intruded upon by strange dreams (memories and/or premonitions, of course) and the insights of his therapist (a delightfully sharp Neil Patrick Harris), he realizes reality isn’t what he thought — especially when a face from the past (Trinity, played by Carrie-Ann Moss) reappears.

Neo’s boss in the Matrix (Jonathan Groff) also reveals himself to be the A.I. villain Mr. Smith (here just Smith), joining a refreshed ensemble that includes an alternate Morpheus — formerly Laurence Fishburne, and now the dashing Yahya Abdul-Mateen II. Jessica Henwick, who opens the movie as new character Bugs, is another welcome addition and the potential future of the franchise. Jada Pinkett Smith also returns, however weakly, as freedom-fighter-turned-leader Niobe.

Watching Neo evolve from reluctant to full-throated hero is familiar but satisfying, even as scenes feel disconnected from one another. The stark contrasts between the “real” future-apocalypse and the cozy, mindless Matrix renders the idea of rabbit holes moot, having already discovered the bottom.

The callbacks are unapologetic, a playful bit of meta storytelling that’s as artless as it is box-checking, and you can feel director and co-creator Lana Wachowski straining against her corporate masters. The script’s mentions of parent company Warner Bros. aren’t potshots but product placement — and ones that might mean something if there weren’t so many Matrix callbacks in the Babel-tower of intellectual property known as “Space Jam: A New Legacy.”

It undermines the supposed universality of Io, the replacement city for the liberated people city of Zion. There, freed from their energy-harvesting pods and illusions, they inhabit an English-speaking steampunk paradise that will undoubtedly be invaded by evil robot Sentinels in later films. Lots of action-figure options here.

The interminable dialogue in “Resurrections” indicts social division, as animated by technology and media, and the sentient bots and zombie-like “sheeple” weaponized against noble causes. Tech-bros aren’t just jerks, they’re literally destructive entities. Office buildings, dingy apartments and alleys provide no respite from the onslaught of symbolic authority (cops, SWAT teams, Agents). Silhouettes and window/water-puddle reflections and mirrors are inescapable. “Get it?!” the movie constantly asks.

Trenchcoats, sunglasses and a numbing shower of point-blank, slow-mo shell casings also feel miscalculated, not so much cool-looking as depressingly rote. Like most fetishistic gun violence, they add little while smearing the momentum with chopped-up editing. Are there any actual life-or-death stakes here?

The plot of “Resurrections” is meant to dazzle and intrigue with a sense that it’s all a bit over their heads, and that certain questions won’t be answered for now. That’s both condescending and empty, a down payment on our future interest when we’ve barely engaged with this object.

The question isn’t whether this movie was necessary. It wasn’t. Like the second and third Matrix entries, it never justifies its existence beyond padding its parent’s pockets and bringing back familiar faces. It’s whether its interrogation of what’s genuine says anything useful or, at least, entertaining during this dark moment in U.S. history. It doesn’t.