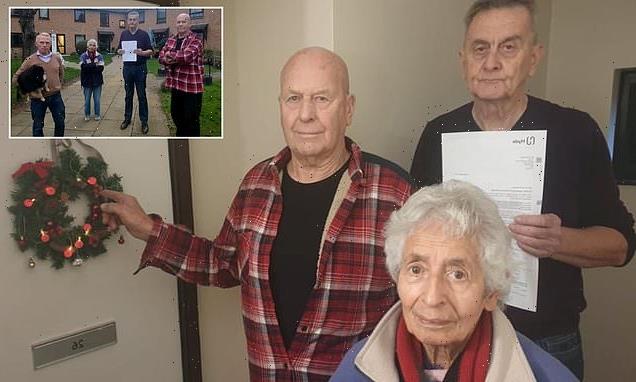 Elderly residents have slammed ‘Scrooge’ housing association bosses after they were told to take wreaths down from their doors or face a £120 bill.

People living in the Joseph Conrad House in Canterbury put up the decorations and Christmas trees to inject some festive cheer into the retirement complex, but Hyde Housing sent ‘aggressive’ letters telling them to remove the ‘fire hazards’.

Hyde Housing also wants residents to clear plants from windowsills, five vases, and any Christmas trees from the corridors and communal areas.

Failure to do so, it warns, will result in the entire block sharing the removal bill if it is not established who owns the items.

David Geoghegan claims Hyde is ‘acting like the Gestapo’. 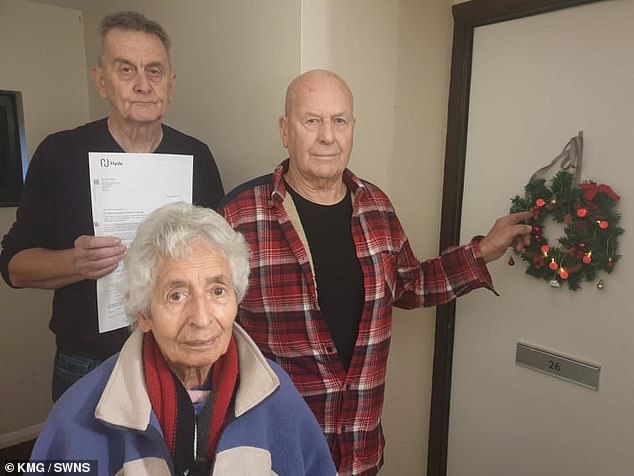 The move did not go down well with Hyde Housing who sent ‘aggressive’ letters telling them to remove the wreaths – because they are fire hazards (pictured from left: John Allan, Brian Goldsack and Wilhelmina Rijshouver) 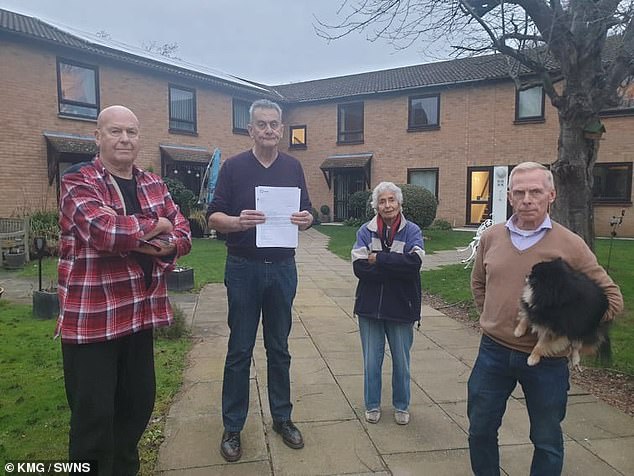 People living in the Joseph Conrad House in Canterbury put up the decorations and Christmas trees to inject some festive cheer into the retirement complex (pictured from left, Brian Goldsack, John Allan, Wilhelmina Rijshouver and David Geoghegan) 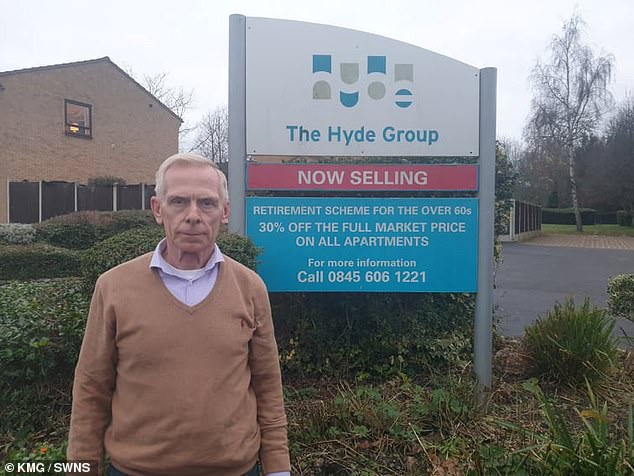 Scrooge landlords banned residents at a luxury block of flats from hanging Christmas decorations on their balconies – as they are deemed to pose a fire hazard.

The property managers at Atlantic House, in Portland, Dorset, wrote to the tenants warning they had five days to remove Christmas trees and bunting.

The ban also extended to children’s toys, washing lines, bicycles and kayaks which they said were ‘non compliant’ with fire regulations.

The letter, signed by Comer Property Management, concludes that anyone who doesn’t comply will face ‘action’, and their details will be passed on to the local council.

The enforcement has been met with outrage with some of the 206-flat development’s residents who said the letters had a ‘threatening’ tone and were a form of ‘harassment’.

Joshua Hanson said: ‘As we enter another austere Covid winter of restrictions it feels that some have embraced the ‘new normal’ a little too well – they are Scrooges.

‘I consider it a harassing letter. It annoyed me, the tone of it, and with everything that’s going on, to put such a threat out to people and such a short timeframe – the way they say ‘serve a notice’ it suggests that people’s accommodation might be at risk if they don’t comply.

‘They’ve written it in such a way as to threaten someone’s accommodation right before Christmas, for having a Christmas tree or a bike on their balcony. How can bunting be a safety issue?

‘It’s upset me and I imagine it will have upset quite a few people. You pay your money, you rent your property and it’s yours – that’s my opinion on it.’

A spokesperson for Dorset & Wiltshire Fire and Rescue Service said there was no formal inspection at Atlantic House.

However, they said the fire service visited the building for a training exercise in December, when representatives also met with the management company ‘to discuss some aspects of their fire safety arrangements’.

He said: ‘Residents have been talking about how upsetting the letters were, and lots of us felt it was uncalled for and heavy-handed tactics.

‘It’s Christmas and there is no goodwill in it.’

The 69-year-old added: ‘The threat of sending people to remove Christmas trees and wreaths – we don’t need that, and we are really upset.

‘I can’t see how a wreath is a fire hazard because millions of people have them.’

Another resident, John Allan, also cannot understand how wreaths pose a fire risk, ‘unless someone comes and sets alight to them.’

The 72-year-old said: ‘I have never lived in such an environment.

‘I came here because it was individual living, so you can get on with your own life, but everything that is being done is being inspected and complained about.

‘It is not a very happy environment at all.

‘Some of the ladies who live here are quite upset about the whole situation..’

Hyde Housing property manager Emma Oliver sent the damning letter on Wednesday, demanding for the residents to remove their decorations.

In her letter, she wrote: ‘I am writing to you all again as you keep storing or leaving personal items in the communal areas.

‘This is not acceptable. The communal areas are not for storage or dumping of any unwanted resident items.

‘Hyde Housing Association have a legal duty to ensure all communal areas are kept free from obstructions (including trip hazards) and fire risks and to ensure communal facilities are used appropriately.

‘No further inspections will be taking place. Christmas decorations and door wreaths are not allowed as they are considered highly combustible.

‘I will attend with the removal team and if the items are still there, I will have them removed and the cost of removal will be recharged to the block if I cannot find out who these materials belong to.

‘The cost of these removals is estimated at £120. We will re-charge this cost to the block or to the individual where we know who this is.’

Audrey Williamson, head of housing for Hyde, explained the association’s strict policy while confirming that the safety of residents and buildings is the firm’s ‘utmost priority’.

She said: ‘We’re sorry but we can’t allow our residents at Joseph Conrad House to put up Christmas decorations in the communal areas of their building, due to fire safety regulations.

‘We know many residents were looking forward to making things festive after a difficult year, but we’ve got to make sure everyone’s safe, and keep to the latest fire safety regulations.

‘Unfortunately this includes door wreaths, as some can be highly combustible.

‘While we can’t allow Christmas decorations in most communal areas, we’re still putting up decorations in designated safe areas, including the lounge at Joseph Conrad House.

‘The £120 was an estimated amount if Hyde was required to remove any of the items which present a risk to everyone’s safety.’