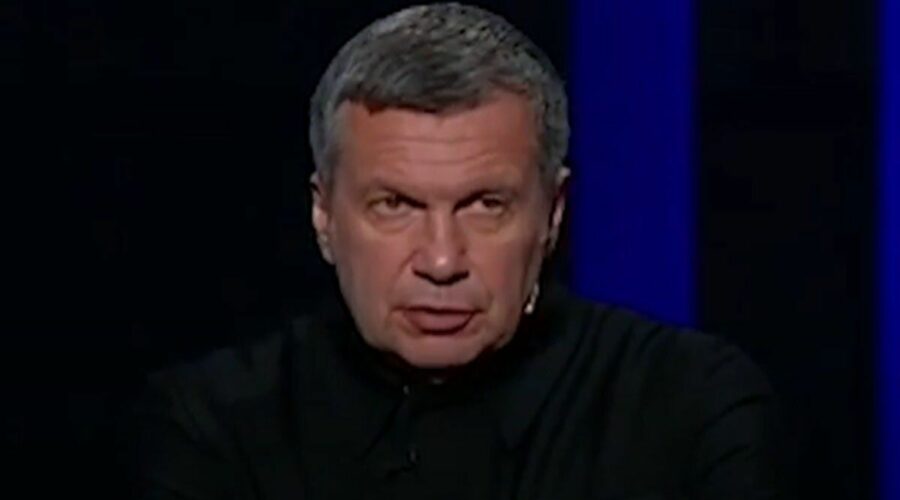 Aiden Aslin, 28, and Shaun Pinner, 48, were convicted of taking action towards the violent seizure of power at a court in the self-proclaimed Donetsk People’s Republic and sentenced to death by firing squad. The UK Government insisted the judgment had no legitimacy and the pair should be treated as prisoners of war. But Vladimir Solovyov mocked Foreign Secretary Liz Truss over her condemnation.

On Rossiya 1, he said: “So if something terrible happens and they are executed, they will not recognise their deaths?

“Will this bring these people back to life?”

Nataliya Nikonorova, the “foreign minister” of the DPR added: “They have not taken a single step to somehow try to participate in the fate of these citizens.

“No one is helping them.”

The leader of the Russian-backed separatist Donetsk region of Ukraine said on Sunday there was no reason to pardon two British nationals.

Britain says Aslin and Pinner were regular soldiers and should be exempt under the Geneva Conventions from prosecution for participation in hostilities.

The pro-Russian separatists who control Donetsk say they committed grave crimes and have a month to appeal.

“I don’t see any grounds, prerequisites, for me to come out with such a decision on a pardon,” Denis Pushilin, the leader of the breakaway republic, was quoted as saying by Russian news agencies.

Vladimir Putin's legs appear to buckle as he gives speech

Donetsk and Luhansk are two breakaway Russian-backed entities in the Donbas region of eastern Ukraine, which Russia says it is fighting to remove entirely from Kyiv’s control.

Three days before launching its invasion of Ukraine on February 24, President Vladimir Putin recognised them as independent states, a move condemned by Ukraine and the West as illegal.

Aslin’s family said he and Pinner “are not, and never were, mercenaries”.

They were living in Ukraine when war broke out and “as members of Ukrainian armed forces, should be treated with respect just like any other prisoners of war”, the family said in a statement.

Russia’s relentless shelling of the eastern Ukrainian city of Kharkiv with cluster munitions and scatterable land mines amounts to a war crime that indiscriminately killed hundreds of civilians, Amnesty International said on Monday.

Ukraine’s second-largest city Kharkiv was under near-constant bombardment from the beginning of Russia’s invasion of Ukraine on Feb. 24 until Ukrainian forces pushed the Russians away from the city in May. Ukraine has said 606 civilians were killed there and 600,000 evacuated.

Amnesty said that it had found during a 14-day investigation in April and early May evidence that Russia had used cluster munitions and scatterable mines in Kharkiv.

“The repeated bombardments of residential neighbourhoods in Kharkiv are indiscriminate attacks which killed and injured hundreds of civilians, and as such constitute war crimes,” Amnesty said in a report.